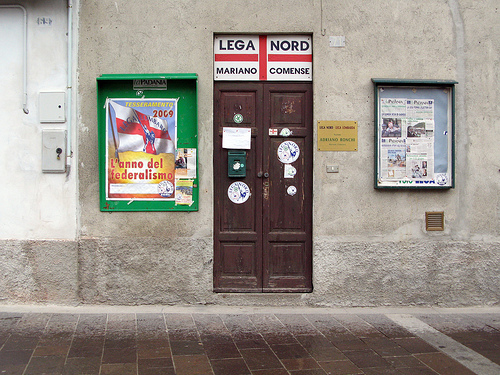 The independence request  of Catalonia reported this delicate question:  regions that aspire to become indipendent  from national states. After the Scottish question there is the problem of Catalonia and we don’t know  if in Italy will return the dream od the “secession of Padania”,  the bigt political aim of the Lega Nord.

The Lega Nord has however changed political philosophy and with the new leader Matteo Salvini now has a national dimension and seems to have abandoned the mirage of an independent Padania. But there is still people in the North who dreams a great independence from the rest of Italy.

The point to deepen is if there are any cultural basis for thinking this independence od Padania and if there are similarities with the Catalan case. Let us put aside for the moment the differences of  political and institutional matters, in Catalonia there is an autonomous parliament and there have been several referendum  while in Italy there was no referendum, and there is only a symbolic (and not well known) Venetian  “parliament”.

The big difference between these two situations is language and culture. Autonomy of Catalonia is based on a history and cultural traditions and a very strong Catalan language.

Catalan is not just a dialect but a real romance language spoken by millions of people especially in Catalonia; already Catalan represents  a  precise identity that makes the Catalan region “different” from others in Spain. The Catalonia can also count on a culture, traditions and a great history. Catalonia has developed its own culture and for a long time it was an autonomous kingdom from that of Castile (until the end of the fifteenth century). During its centuries of history, Catalonia has developed a strong cultural identity: also at the university they are studying language and Catalan culture.

The situation of Padania is very  different: first there isn’t a common language of identity other than Italian: in the area of ​​Padania there are many dialects (Veneto, Lombardo, Piemontese) but their status is the same of others Italian dialects. We are not facing a language of identity, but a series of dialects. Padania also hasn’t a similar history as the Catalan one: like most of the Italian regions it was for under the  foreign domination.

Indeed the name “Padania” refers to a clear Identification, geographical and historical. The Lega Nord has pursued the dream of Padania not on the basis of historical and cultural but economic bases and for contrasting with the rest of Italy (in particular with South Italy). These differences are substantial and show us how the story Catalan and the valley does not have much in common.