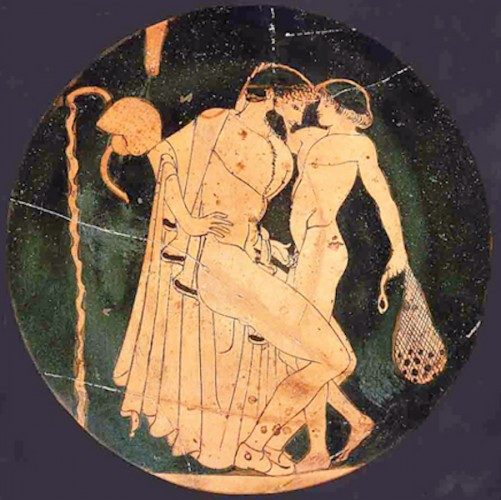 Homosexuality: Were Ancient Greece and Japan Right All Along?

Homosexuality has been inherent in societal cultures since the ancient Greeks, Egyptians, Romans, and Japanese. Ancient art forms and texts not only depict homosexuality as a way of life, but also as a construct in society, the military and the clergy. On the right wing, homosexuality could be said to be natural and inevitable results of traditional social differences. Is homosexuality, naked as the B.C. day it was born, human nature that has been wrongfully questioned because it inconvenienced doctrine based on reproduction?

Social construct and behaviour through art

Plato’s Symposium advocates the purity and beauty of love between men, Homer’s Iliad suggests Achilles’ strong bond of love with his best friend, and even the world’s oldest graffiti is gay. Homosexuality was likewise not a taboo topic in Japanese shunga and folklore. The Tale of Genji tells of a man who, spurned by a woman, sleeps with her brother. Homosexuality was natural, accepted and well documented. That said, even though people engaged in same-sex love or intercourse, it was for company or entertainment and not a replacement for conventional marriage.

The practice of pederasty

A practice prevalent in the ancient times, pederasty is the love between an adult and a younger man. It was also predominantly inherent in the military and clergy. Older men took on mentor roles to guide younger men through the rite of passage to adulthood. The foundation of their relationship was education, protection, love and respect, and exclusivity ceased after the mentee came of age. In the Japanese context, samurai had a similar practice where the disciple offered his body as a symbol of allegiance and obeisance to his mentor. There are also works of art that illustrate Buddhist monks engaging in intercourse with younger disciples.

“There is nothing unnatural about it. It is intellectual, and it repeatedly exists between an elder and a younger man, when the elder man has intellect, and the younger man has all the joy, hope and glamour of life before him.” – Oscar Wilde, on the Love That Dare Not Speak Its Name

Sexual orientation as a social identifier

Sexuality and orientation were not social identifiers. In the microcosm of theater, Japanese opera or kabuki consisted only of males like that in Greece. Younger males who typically played feminine roles were often recipients of sexual desire from older males. If one had to label it, it would be evocative of the relationship between a masculine dominant and a feminine submissive, rather than a male and a female. As blighted as it is that female homosexuality in particular has not been well represented, many would even dismiss such associations of dominance with either gender in modern day society.

The apparent inability to reproduce

Homophobia in the past may have been argued based on the inability to procreate. In the case of Japan, the first foreigners who were supposedly liberating Japan seeded such thought that equated homosexuality with blasphemy. That said, the church could only be faulted for instigating stigma in the acceptance of same-sex love in a family construct. Both Greek and Japanese societies at that time were untainted by Christian doctrine, but nevertheless family units had started to become an integral construct with the progression of society.

In modern day society however, with the exception of those physically unable to produce offspring, an increasing number of heterosexual couples are proclaiming a new lifestyle choice. Heterosexuals have more freedom to choose whether or not to reproduce as society progresses. In light of this course of nature, homosexuals who could make equally good or better parents are likewise less likely to be pressured into having a family by “normal” reproductive means and may instead adopt. The basis of the inability to reproduce debunked, there remains little or no reason as to why same-sex couples are denied or judged for their choices in modern times.

“Why are you male, female, gay, or unmarried” are unanswered material labels. Not everyone in the ancient times was homosexual. In the spiritual sense, every individual has his own intrinsic nature. Let us evolve, let nature take its course.