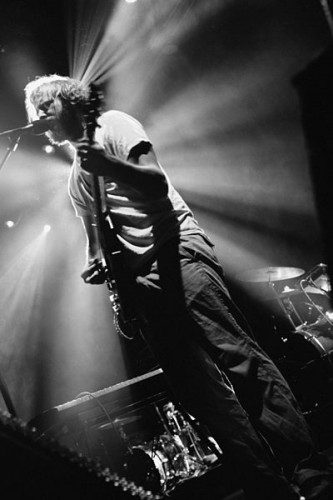 It has been five years since Bon Iver’s second album Bon Iver, Bon Iver. Since then, Justin Vernon’s haunting sonic soundscapes have echoed in our collective consciousness. From tracks such as Re:stacks, Holocene & Beth/Rest we have been rewarded with tantalizing glimpses into the ethereal guitars and resonant horns which permeate Bon Iver’s musical direction. In a recent statement, Trevor Hagen, Bon Iver band-member & vocalist said, “ever since the door swung shut on that north woods cabin, we all felt like Justin entered a future we had imagined as kids. It was an obsessive, simple dream we shared as teenagers growing up in Wisconsin: just music, always.”

This notion of being lost in a dream is a recurring theme in critical analyses of Bon Iver’s discography. Whilst, For Emma, Forever Ago was a rumination on heartbreak and loss, Bon Iver, Bon Iver was a more straightforward singer/songwriter affair. In 22 (Over Soon) Bon Iver’s departure from any lingering constraints of the “Indie Folk” genre is further exemplified by the incorporation of a more electronically hinged, ambient sound. Significantly, everyone from Tove Lo to Läpsley are incorporating this minimalist and almost elegiac approach to their craft. The obvious influence of Eno especially on collaborative tracks such as Friends by Francis and the Lights only serves to underpin that the creativity of Justin Vernon’s newest direction is a palpable reflection of the symbiotic growth of electronic sound within the 4 chord hooks of modern day indie folk. We saw the beginning of this seed planted on Bon Iver, Bon Iver on tracks such as Hinnom TX where the ethereal vocals slide effortlessly from context to context. Hagen, in his statement on the Bon Iver website that “If ‘Bon Iver, Bon Iver’ built a habitat rooted in physical spaces, then 22, A Million is the letting go of that attachment to a place.” This transience has led to Bon Iver being able to pursue a new vibrant direction. On 22 (Over Soon) the warmth of the rare strums of the electric guitar are matched by a gentle baseline rearing its head  culminating intelligently in a sax solo which breathes a blast of cold air to temper the warmth. Bon Iver’s instrumentals, in lieu of consuming or superseding the vocals, channel themselves with verve around the lyrics. The last verse of 22 only serves to epitomise this “As I may stand up with a vision,” “Within our eyes there lies a scission”. “The ten songs of 22, A Million are a collection of sacred moments, love’s torment and salvation, contexts of intense memories, signs that you can pin meaning onto or disregard as coincidence,” says Hagen. Meaning and Intensity are the two themes which are attached to every Bon Iver track, from Michicant to Skinny Love every word speaks of epiphany and apotheosis. Every intonation is a glimpse of that cabin in the woods. Every note a poignant reminder, Bon Iver are back.

22, A Million is released 30th September