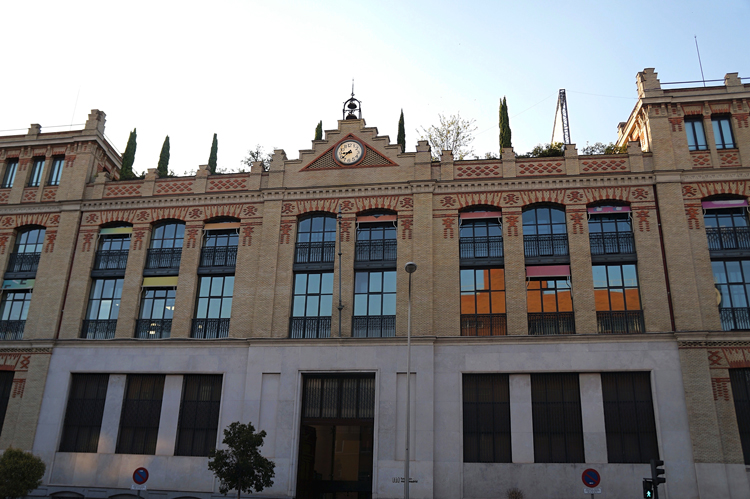 A stage peaks over the roof of the elegant La Casa Encendida, ready for a show on the Magnetic Terrace | Elizabeth Guthrie

How to Experience Live Music in Madrid Like a Local

It’s a Tuesday evening, and patrons crowd around a tiny stage in the back of a shabby (but still cozy!) cafe to experience one of Madrid’s best kept secrets: its live music scene. I searched Madrid for concerts and shows beyond the traditional but touristy flamenco. My exploration began at an open mic night at Café Libertad 8, where I watched the local talent strum their acoustic guitars and sing with a soft but ardent passion.

“The music scene in Madrid is active, it’s creative,” says Andrés Fodón, coordinator of the open mic nights at the cafe. “It’s about to explode, and the whole world will know it.” 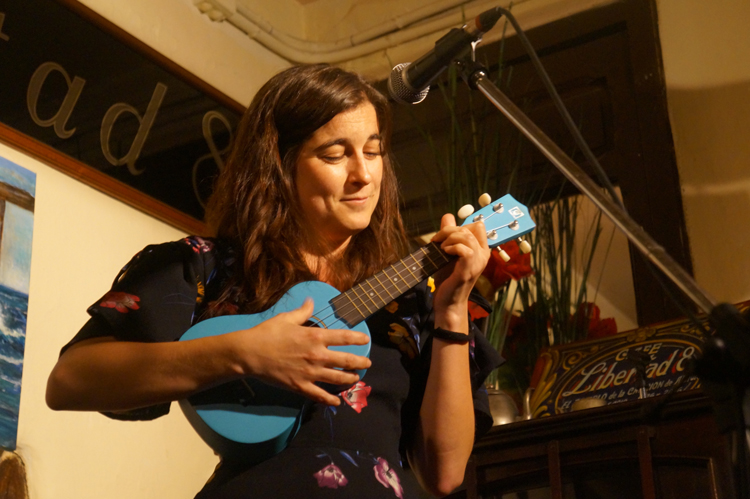 A cheerful singer strums her ukulele, performing at an open mic night at Café Libertad 8 for the first time | Elizabeth Guthrie

Libertad 8 is a cafe tucked away in a corner of the Chueca neighborhood, with open mic nights every Monday and Tuesday and other concerts throughout the week. The cafe is intimate and rustic – you’re never more than a few feet away from the performer, but if you look around the shadowy room you’ll notice the eclectic decorations and mildew-stained walls that give the cafe its charm. If you’re looking for English, you won’t find it here: this is a cafe for the locals. 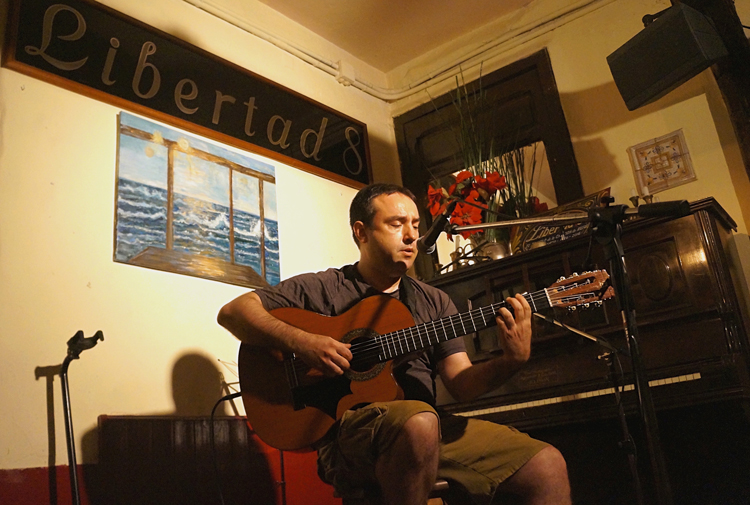 The music ranges from bubbly voices alongside the strums of a ukulele, to songs that put a twist on traditional Spanish guitar, to melodies reminiscent of ‘60s psychedelic folk. It’s the perfect place to sip a glass of cava, munch on some olives (a simple but delicious tapa), and experience the music scene of Madrid like a local. Fodón says it best: “These events make the city come alive.” 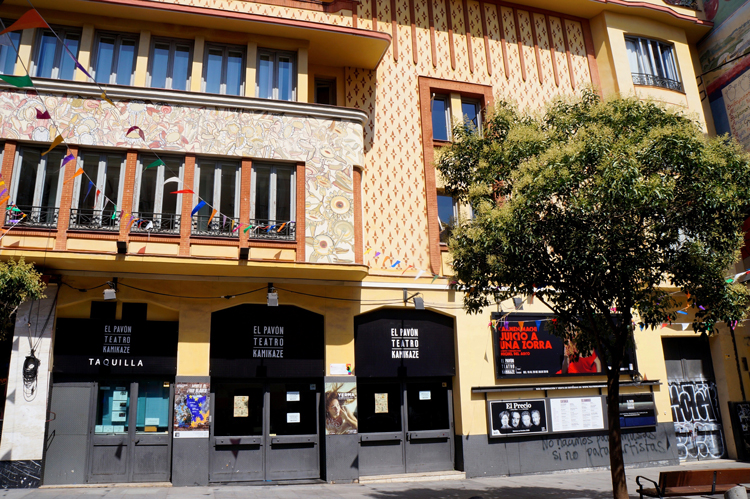 Stepping into El Pavón is a good reminder of everything that a concert should be: a sample of art, a reflection of culture and a rowdy party. Opened in 1925, this historical theater is a venue that seems perfectly fitting for both Shakespeare and a rock concert, but tonight it pulsed with an energy that can only come from rock n’ roll.

The show began with the contagious vibrancy of Ingresó Cadáver. Their drums beat hard enough to convey an intense fury, while their guitar played fast enough to reveal an excited passion, and the singing felt familiar, like something you’d hear in your punk friend’s garage back in the ‘90s.

At the end of the night, the members of mail band Rufus T. Firefly danced around under flashing lights as their soft alternative ballads quickly erupted into the turbulent guitar and fiery singing of a rock star’s finale. This was, once again, a truly local experience: many audience members knew the lyrics and sang along with this small Spanish indie band. 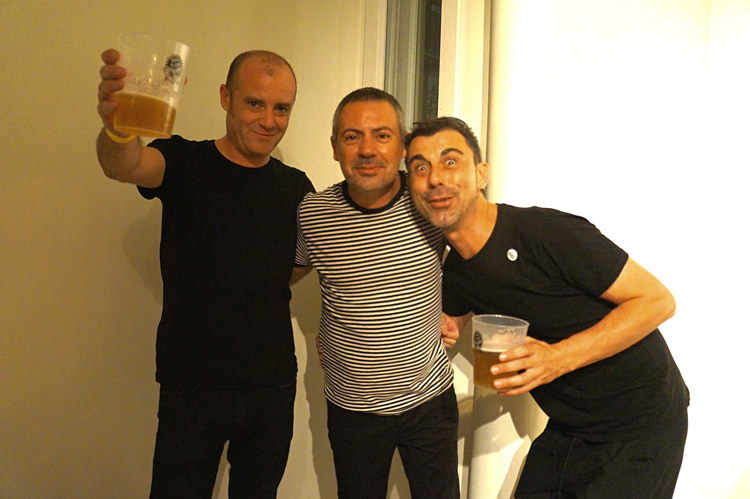 Juanjo Reig, the bassist of Ingresó Cadáver, affirmed the importance of live music to local Madrileños. “It’s a cultural activity,” he says. “You can see a concert every day of the week.”

Small venues like El Pavón allow this cultural activity to thrive. “Without venues like these, we would lose the cultural aspect of music, the romanticism, to the business side of the industry,” says José Antonio Tomás, guitarist and vocalist of Ingresó Cadáver. 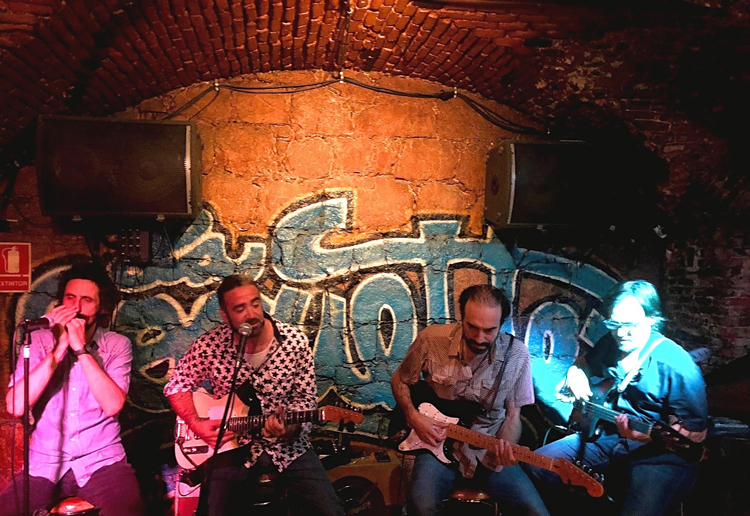 Climbing the stairs down to this lively little basement bar gave me a wave of nostalgia for the South. It felt like a place I could stumble upon while strolling through the streets of Memphis, but the longer I listened, I noticed a uniquely Spanish energy in the music. It was the same sort of quiet passion that I heard at the open mic night, interspersed with moments of zealous intensity and adapted to the sound of the blues.

With brick stretching across the arched ceiling, blue graffiti splashed on the wall behind the performers and sunflower seeds sitting on each table, this hole in the wall was marked by its grimy character. The crowd was relaxed but engaged with the vibrant blues band. With its location a few blocks away from bustling Gran Vía, La Coquette is the perfect alternative to fancier bars for a gritty Madrileño experience. 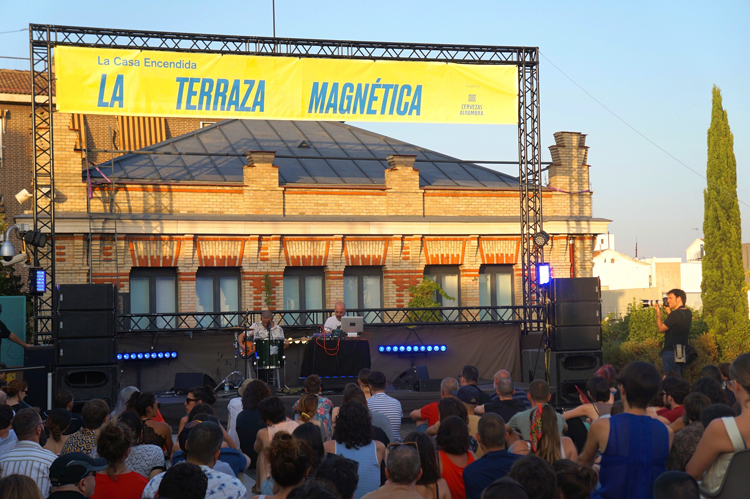 On a relaxed Sunday night, an audience gathers at the rooftop terrace of this cultural center in the Lavapiés neighborhood to sip wine and listen to the ethereal sounds of experimental duo Ann Deveria. The band uses unconventional methods to make music, like playing a cymbal with a bow and adding a track of a trickling stream of water. Between these unorthodox approaches and the intense drum beats that show up when you least expect it, it’s easy to imagine the celestial music showing up as the soundtrack to a trippy sci-fi movie.

Within its four floors and rooftop terrace, La Casa Encendida hosts concerts, film screenings, exhibitions and other cultural and educational events. It has created a space where even the most avant-garde music and art can thrive.

“I would say it’s quite local,” says 35-year-old Peter Paul Hoogendoorn, who attended the show that night with 35-year-old Ton van der Plas. “Even within Spain, it’s pretty alternative. Not many mainstream people.” The two friends didn’t know the band before the concert, but they knew the venue offered a cheap way to spend a Sunday night. “It’s a good way to discover new kinds of music, and it’s very low-profile, it’s very accessible,” says Hoogendoorn.

Even if the transcendental sound of a cymbal played by a bow isn’t your normal style of music, La Casa Encendida is worth checking out. It offers a wide variety of concerts, and it’s a chance to get a glimpse of the local counter-culture of Madrid.

Most people don’t think of Madrid as a hotspot for live music, but maybe that’s a good thing – it has a music scene that remains untainted by the businesses that dominate the mainstream music industry. I saw shows ranging from acoustic to avant-garde, but there was one common theme in each venue: I felt like I was living a truly local experience. And performing in the city still holds a special prestige for the musicians of Spain. “It’s the capital,” says Tomás of Ingresó Cadáver. “It’s the center of everything.”

Open mic nights every Monday and Tuesday at 7 p.m., free of charge. It also hosts concerts, poetry readings and other events. Find their schedule here.

Price of concerts varies. I paid 10 euros for a ticket, and it came with a free drink from the bar.