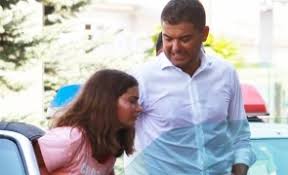 Cristian Boureanu and his daughter Ioana

Ex-politician Cristian Boureanu, then member of the Chamber of Deputies which is the lower house of Romanian Parliament, has aggressed his daughter Ioana, aged 15, after she ran away from home one week ago. Boureanu case triggers public outrage in a domestic violence-torn country with about 7,000 children being abused by their parents every year, official figures show. Teen’s father, Boureanu, 43, trades blame with his ex-wife for the child’s behaviour which he describes as inappropriate. The man said his little girl has been smoking, drinking alcohol and was taking drugs while she was hanging out with friends in clubs and pubs. The Romanian ex-parliamentary has had full custody of the child for the past twelve years. Ioana Boureanu has been expelled from a private school few months ago because he had threatened scholars, according to her mother’s account. The woman has also said she had alerted authorities filing complaints about his violent behaviour against Ioana in the past. Since her misconduct, Boureanu has learned to confiscate the girl’s cell phone to teach her a lesson and to use an obscene language as some of the methods to bring her back to education, one recording reveals. On the same audio tape the father can be heard screaming at her to go away to her mother for allegedly lifestyle and banning relatives from visiting her to finally saying“Be traumatized!…That’s it!”

Once the fifteen-year-old girl left home on last Saturday after repeated scenes of violence she has claiming ex-politician has started tracking the child by one mobile phone application. CCTV image released yesterday from downtown Bucharest shows Cristian Boureanu was dragged her feet, along with his bodyguard, after she tried to escape the brawl on Sunday afternoon. Within minutes police responded to an emergency call a bystander made to a domestic assault in what later it turned into abusive behaviour against a minor child case. Eyewitnesses have said they heard a frightened girl screaming ”He takes me home…he beats me to death…he is going to kill me!” Confronted with the image he has denied any wrongdoing, in his opinion, saying he believes it was the best way to take his daughter back home. Ioana Boureanu lives at her mother’s residence while an official investigation is underway and refuse to get back to her father.

Boureanu faces three to seven years in prison if convicted for abusive behaviour against a child. He said today he is willing to give up teenager’s custody. Romania does not have anti-domestic violence or controlling anger programs. Ioana Boureanu could visit a psychologist to the child protection officers’ advice if the father agrees to therapy.

Former top politician, Cristian Boureanu has been lately in the centre of violent incidents ranging from TV shows to nightclubs. He has a relationship with a girl, aged 19. Boureanu was married twice; first to Irina Boureanu and then to Valentina Pelinel, ex-international model. Cristian Boureanu has finance and national security university education.