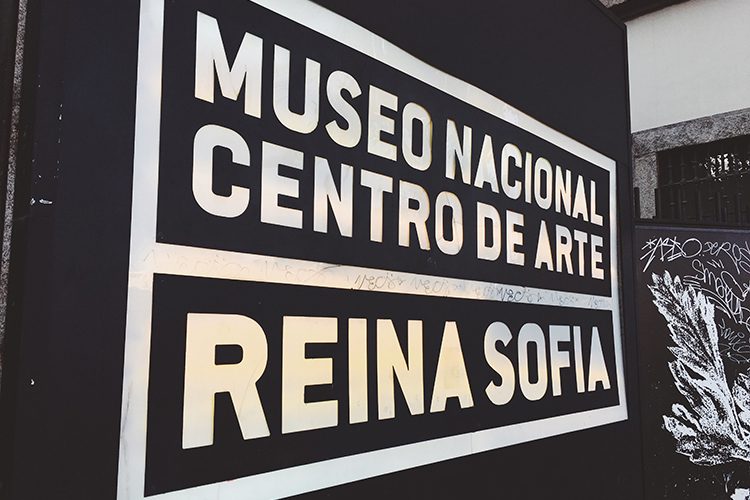 A Tour Through Three Art Corners of Madrid: From The Rastro to The Prado

Lela JenkinsAugust 30, 2017
MADbudget: a local's guide to Madrid0 Comments 0
The following article is published in the #RGNNMadrid Magazine: Vol. II, Summer 2017, produced during ROOSTERGNN Academy’s Travel Journalism & Photography Internship Seminar in Madrid, Spain, under the editorial direction of RGNN Expert and Mentor Patricia Rafael Lage. Follow #RGNNMadrid for all of our Madrid coverage.

For some, visiting museums is their least favorite part of traveling to new cities. Some even try and avoid it altogether. But visiting old art museums is not an experience that has to be dreaded. It’s an important part of any culture that can actually be enjoyed when taken in small doses, balanced out with authentic madrileño culture the city has to offer. A great deal of what makes Madrid special can be seen in just three of its corners, a short journey spanning centuries of art history.

This brief tour through Madrid’s arts starts off easy, if not a bit unexpectedly: the Rastro. That’s right, Madrid’s biggest flea market for clothes and souvenirs (a short walk from the Tirso de Molina and La Latina metro stations) also houses some of its most talented local artists. One of these artists is José, who humbly refused to give his last name because of his opinions against mass publicity and production of art. 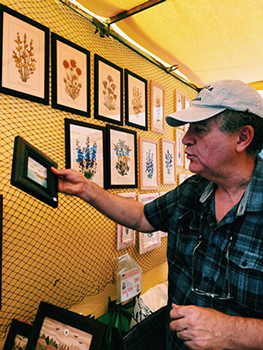 “I don’t want to put my work in a gallery because this way it’s special,” said José. His art is indeed special. At first the small paintings seem to be watercolors of landscapes and flowers, but up close you can see the hillsides are made of dried veiny leaves, all the flowers are really hand-pressed petals, the greenery all tiny sprigs and herbs. He explained that he made them with “a lot of newspaper, a lot of weight and a lot of hard work.”

José’s opinions against commercialization reflect the attitude of a lot of artists at the Rastro, who in many cases don’t even carry a business card on them. The idea is that publicity, while perhaps a more consistent means to bring in money, will lead to copies and ultimately a lack in authenticity. Each of these artists’ stands is filled with an expression of themselves, their personal lives. They are normal madrileños with a unique story to tell, and to copy their hard work and sell it for cheap would be to falsify their identities and individuality.

“What I do here is special. You can’t find it anywhere else.” –José, artist at the Rastro

The Rastro may be a morning affair, but Sundays at the Reina Sofía are best done in the late afternoon to evening, when admission is free. So after your brunch break, burn it off with a 20-minute walk directly east, or take the C2 bus for 15 minutes to the Reina Sofía stop (it is is also nearest the Atocha metro stop). Like many museums, it is also free any time for students with a university ID.

Even if you aren’t a huge fan of art history, you’ve probably (hopefully) heard of Pablo Picasso and may have heard or seen a reproduction of his famed Guernica. It’s on the second floor in room 206, and you can take a cool crystal elevator to it that overlooks the plaza in front of the museum. This is what most everyone comes to see, and while the rest of the museum is filled with thousands of works of amazing Spanish art, this work in particular is closely tied into Spanish history in a way that is sure to give you your daily dose of culture and inspiration. 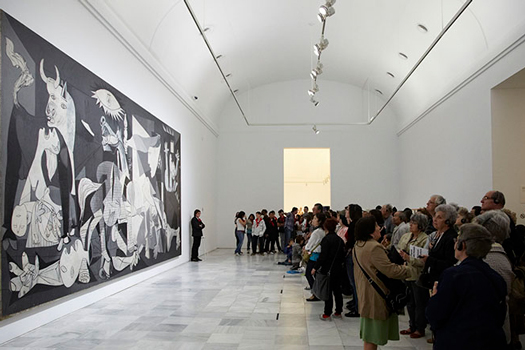 Right around now is the perfect time to see Guernica because for its 80th anniversary since its creation and 25th since its arrival at Spain from New York, the museum has created a special exhibition around the painting: Piedad y terror en Picasso: el camino a Guernica (Piety and terror in Picasso: the road to Guernica, in English).

The exhibition opens up the story behind Guernica to a wider audience through a concise, comprehensive walk through the events that led to and influenced it. As explained on the walls of the exhibition, Guernica is Picasso’s almost eight-meter response to the German bombing of the civilian town of Gernika in the Basque region of Spain, in a time when the artist was exploring how to express and embrace the extremes of human emotion.

“Picasso believed that monstrosity—even the violent and threatening kind—was part of the self,” said Concha Iglesias, head of the Reina Sofía’s press office. “It ought to be recognized and represented.” And so it is. Guernica, at least from subjective experience, is a profoundly depressing painting that, in its massiveness, asks the viewer to be truly vulnerable and deeply emotional.

Not far down the street is the Reina Sofía’s big brother and our grand finale: the Prado. The 34 bus and the Banco de España metro stop (line 2) are the closest. It’s kind of the non-optional museum of Madrid (you can’t visit the city and say you didn’t go to the Prado without being shamed), so here’s your game plan just to say you went: see Las Meninas. 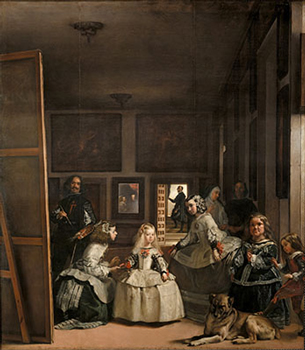 Referred to by some as the Mona Lisa of the Prado, Diego Velázquez’s Las Meninas has a lot of meaning for a single painting that doesn’t take an art historian to unravel. Located in room 012 on the first floor, it’s a nice prequel to our Reina Sofía visit: Pablo Picasso, Salvador Dalí and Fernando Botero even took to studying the complexities of the painting in several of their own renditions, solidifying its fascinating place in Spanish art history.

Take, for example, the fact that this is also a self-portrait of Velázquez himself. Yes, that is him on the left, painting the viewer of the painting of him painting. Or is he? He could be painting us staring back at him, or the painting we see in front of us, or something else entirely. There’s no way to know. If that isn’t meta enough, check out the oddly lit mirror in the back, which stands out against an otherwise dark wall. This painting was commissioned for King Philip IV of Spain and his wife Queen Mariana of Austria, and it appears that this is whose reflection is staring back at us. The king and queen are permanently gazing upon this commissioned portrait of their daughter, the Infanta Margaret Theresa. She herself exhibits cognitive dissonance, as her head is turned the opposite direction from which her body faces, while her eyes are turned, like Velázquez’s to look upon us.

That is only a very brief interpretation of some of the aspects of the painting which have puzzled art historians for years. For a quick and painless visit to El Prado, the enigmatic composition and multitude of interpretations of Las Meninas is sure to keep you occupied and interested in making your own.