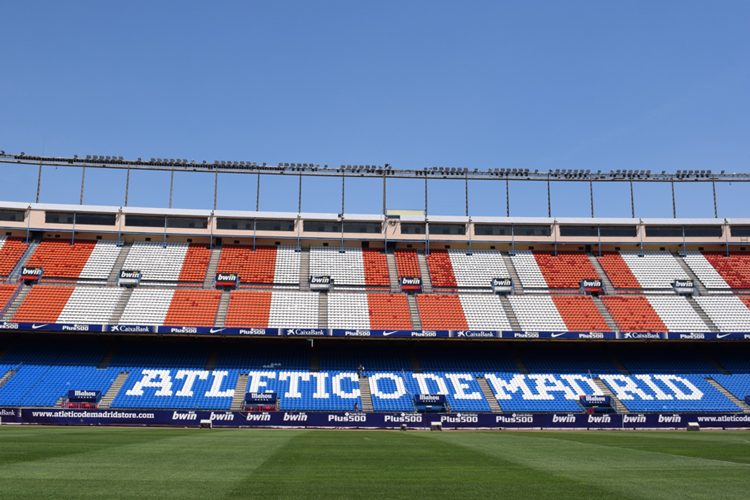 Spain’s Soccer from an American’s Point of View

Michelle GoldsboroughSeptember 7, 2017
MADbudget: a local's guide to Madrid0 Comments 0
The following article is published in the #RGNNMadrid Magazine: Vol. III, Summer 2017, produced during ROOSTERGNN Academy’s Travel Journalism & Photography Internship Seminar in Madrid, Spain, under the editorial direction of RGNN Expert and Mentor Natalia Martín Cantero. Follow #RGNNMadrid for all of our Madrid coverage.

After spending time in both Spain and Argentina, two countries who embrace sports like a mother embraces her child, I’m positive about one thing: Soccer for Spain isn’t just a sport, it’s a religion. It’s also lifestyle that can reduce barriers between countries. Soccer, or fútbol, is the reason for crowded sports bars and millions of excited fans—some would call then delirious—here in Madrid, Spain. It’s much bigger than soccer in America where football holds the number one spot in sports.

While in Madrid I had the chance to find myself a seat at a local bar and observe Madrilenians glued to seats, drinks in hand, eyes focused on the TV, as Real Madrid and FC Barcelona squared off. Sitting there, at a table that was practically in the middle of the room, accompanied by friends from my trip, and sangria, I became aware of our behavior compared to those watching the game. It was like we were inside our own bubble, a different reality, while outside everyone was watching the game with the same emotions plastered to their faces, eyes wide, and little beads of sweat forming on their temples. The bars across from us were the same way no matter if the table was inside or outside the restaurant. Everyone was watching the game, including the bartenders who would stop, hands full of dishes to watch, for at least a full minute before returning to work.

Being a soccer fan isn’t just a status to share in conversation with friends discussing sports. Here in Madrid soccer is life, religion, and possibly the result also of a good or bad day! In order to fully understand what kind of life it is to live as a soccer fan in Madrid, I simply placed myself in the position of a fly on the wall and observed everyone I could.

If you happen to be one of those people who aren’t into soccer, whether in Madrid, America, or anywhere else, here is what you should know: First off, it’s called football. There are three main football teams in Madrid: Real Madrid, Atlético de Madrid, and Rayo Vallecano. They all play a style of football called Tiki-Taka, which is characterized by short passes between members of one team until one member aims for the goal. Real Madrid has been recognized as the best soccer team of the 20th century by FIFA.

I was sitting in a park surrounded by food and a few friends watching some little kids kick around a soccer ball. They were maybe five or six-years-old and they weren’t just kicking it back and forth in a semi-straight line to each other. They were really kicking it, diving and spinning. Two of the guys I was with got up and decided to join them, shouting aca meaning “here.” The little boys would take a running start and kick the ball fast in their direction.

The difference between these little boys and those at home in America is that these niños were taking the game very seriously. It wasn’t just for fun. They were practicing for what seemed like perfection. Possibly to play professionally as they grew older.

Watching the game that night at the bar I could tell how packed the stadium was. The last time I had seen a stadium that full was when I caught glimpses of the 2008 World Series where the Philadelphia Phillies (my home team) won.

I got up from my seat at the bar and walked over to the bartender and waiter, whose named I learned was Ramiro. After I introduced myself, he agreed to talk with me. Ramiro told me that he was native to Madrid and has been into soccer since he started playing at the age of eight, not an uncommon age to start kicking a ball around in Madrid. He explained to me that the restaurant he works at usually gets crowded for games, which he likes because he watches soccer the most while at work.

I had the chance to speak with another man, Carlos, who’s an architect. He goes to football games around every fifteen days and collects newspapers talking about his team.

Similarly to how Americans participate in tailgating before a football game, Madrilenian’s drink beer before the game starts, and if their team wins, you can be sure to see many rosy-faced locals celebrating with a few more pints. For Ramiro, whether or not his team wins or loses a game can change how he feels during the day. He says this makes him relieved the games are at night and the day will be over soon. His team of choice is Real Madrid, same as with this workmates.

Living and growing up in the suburbs of Philadelphia, I can definitely say that there are some really passionate sports fans in both places. A friend at home once said that his day or week depends on how his team is doing, similarly to that of a Madrilenian.

While the stadium experience is probably an unforgettable one, there are those who can’t make it to the game but still want to root for their team with a crowd. Thanks to the partnership between Spain’s sports newspaper MARCA and Hyundai, Hyundai Fan Park is the second best experience. Complete with beer, huge screens to watch the game, music, and other performances.

So whether it’s your first time in Madrid and you’re unsure what to do, or you’re a frequent visitor, just remember that these diehard fútbol fans will cheer on their team ‘till the end.