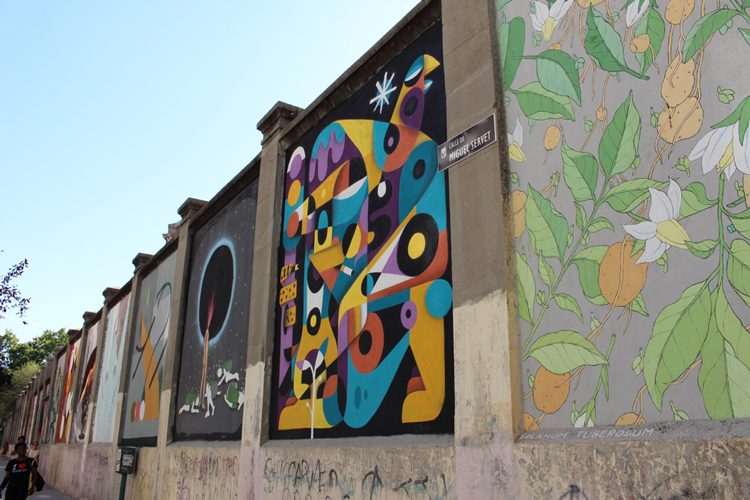 Outside of La Tabacalera - it closes in September | Audrey Valbuena

Audrey ValbuenaSeptember 12, 2017
MADbudget: a local's guide to MadridSpainTravel0 Comments 1
The following article is published in the #RGNNMadrid Magazine: Vol. III, Summer 2017, produced during ROOSTERGNN Academy’s Travel Journalism & Photography Internship Seminar in Madrid, Spain, under the editorial direction of RGNN Expert and Mentor Natalia Martín Cantero. Follow #RGNNMadrid for all of our Madrid coverage.

In the heart of Madrid, bustling behind the scenes of mainstream art, lies a thriving community of artistas de las calles, who decorate the city with art of the street. Goya, El Greco and Velasquez may be at the forefront of Madrid’s art scene, but the artists who define the city’s culture most may be those who throw their eyes to the street.

In Lavapiés, Madrid’s most multicultural neighborhood, street art lines shop walls and park benches, and paste-up style stickers find their way to cover all the space in between. Inhabitants of the area go about their day serenaded by the colors of the city streets.

Alison, a local Madrileño who leads street art tour around Lavapiés, believes the reason behind all the art in Lavapiés is that it is one of the youngest and most accepting barrios in Madrid.

“It’s a really multicultural area,” says Alison, of Lavapiés. “It’s also full of really young people. A lot of young people come here to have drinks, parties… it’s an area where young people feel comfortable. You know if you paint here you are going to be seen.”

It also helps that every summer, Lavapiés throws a street art festival called C.A.L.L.E., where artists are legally able to perform on their art on the walls and windows of shops in Lavapiés. The festival, held by Madrid Street Art Project, seeks to encourage the making of art in an “open and participative way, and make the area a space for outdoor art, and encourage all people to enjoy it in a close and everyday way.”

It helps, too, that most of the shop owners keep the paintings up, rather than being disturbed by their presence. Many of the artists align their work with the purpose of the shop, or otherwise make their pieces simply beautiful, so the owners of the shop have a hard time justifying the removal of the art after the festival is done. This festival, too, is one of the only times when street artists can display their work without being berated. 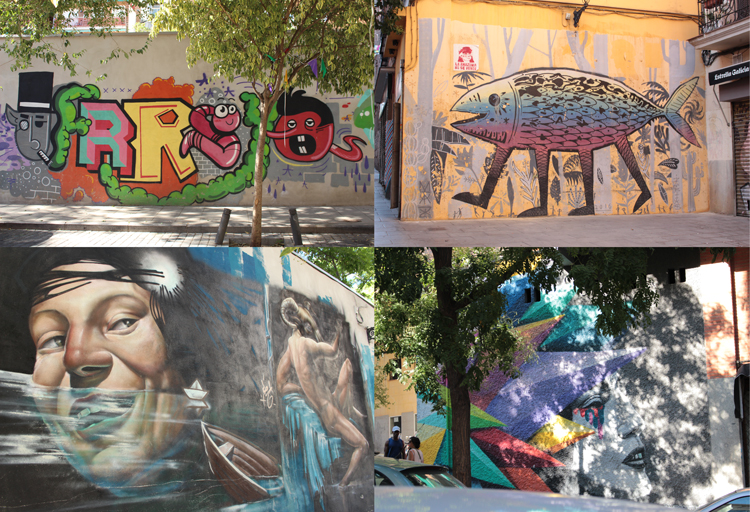 “It’s illegal in many other places,” says Alison, “but here there are a lot of exhibitions, and they give [the artists] the opportunity to do a lot of good things, so I think that’s the reason why a lot of people tend to stay in this area.”

Because Lavapiés is so accepting, artistic works line the streets. Some are legal; some, illegal, based solely on where they are placed. Some have messages of social justice; others simply catch the eye with beautiful colors.

“I thought it was kind of interesting,” said Rosslyn Harvy, a street art tourist from Melbourne, Australia. “I’ve actually done this tour in London, and it was a world, so I thought in comparison to that, the art here was less complex and diverse. But I thought this was a different thing to do in Madrid. I liked some of it, and some of it I hated, and you know. I don’t know, I guess some of the artists have a really political message, and some are just concerned with presenting something attractive.”

The barrio walls are covered in geometric shapes with dynamic colors, fish with bright and brilliant legs, or women in death flying over the oppression they saw in life. Some of the art is feminist, some of it angry, some even just displays a recognizable character, but all of it demands to be seen. 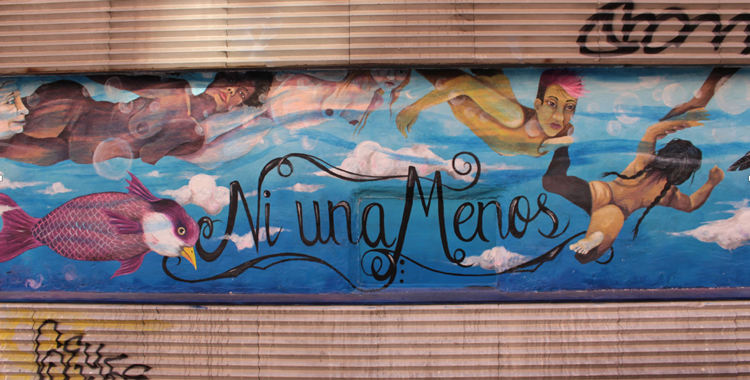 A portion of Bárbara Siebenlist’s work. Victims of domestic abuse fly around the words “Not one less” | Audrey Valbuena

The work of some artists, like Madrileño Por Favor, always carries a message to be seen. Por Favor, who signs his art with an “x” and a dot, symbolizing the multiplication “por” in both English and Spanish, uses his art to denounce social class, speak out again borders, and fight against the suppression of free expression. He paints in stencils, distinctive for the way they silhouette figures, but never give face to a name.

Other artists, like the female Bárbara Siebenlist, use their pieces to speak out against social wrongs. Her piece, which uses the phrase “Ni una menos,” or “not one less,” displays a series of women in death, lost to the troubles of domestic violence, arguing for the acknowledgement of these wrongs and that we must not lose any more. “Ni una menos” appears in a number of works, and many other artists these days use their work to speak out against terrorism and violence plaguing the streets of Spain today. 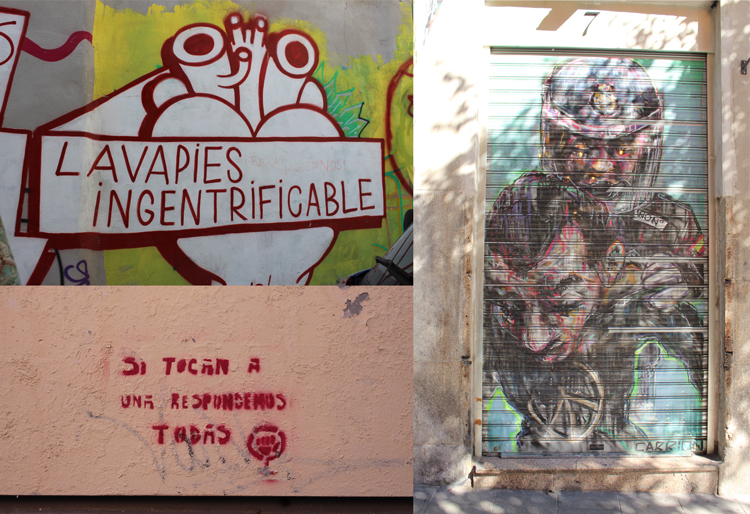 Gentrification, police brutality, and words of responsibility — the social art of the streets | Audrey Valbuena

Yet, not all the works in Lavapiés speak out against injustice, or even contain any semblance of seriousness. One street artist simply paints a chihuahua dog insignia, and another, from Brazil, paints a warrior man in the traditional colors of his homeland.

Because street art is not always legal, the neighborhood offers places to paint without fear of punishment from authorities. One of these places is a small green area on the back streets of Lavapiés, simply called “Esta es una plaza.” The neighbors surrounding the area bought the empty lot and turned it into a place to display art. All artists must do to paint in the space is pitch their idea to the owners — they then vote on whether or not they like the piece and then allow the artist to being painting. Outside its function as a space for art, the area also contains toys, benches, and trees, as a space for children and adults alike to enjoy down time and green space. 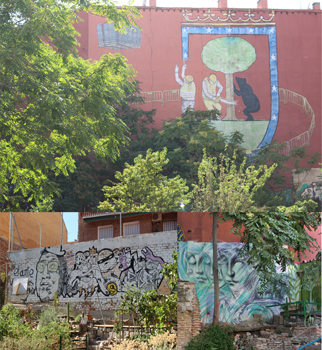 Some of the work in Esta es una plaza: A satire of the Spanish flag and comment on the lack of environmental conservation in Spain; a mural that proclaims “art is shit” (though covered for profanity); a group of feminine faces lost in green space. | Audrey Valbuena

The biggest legal area to paint is La Tabacalera, an old Tobacco factory turned art hub and center. It is under public ownership by the Ministry of Culture through the General Directorate of Fine Arts, and houses artists of every walk of life. It is known to be accepting of all and without rule, which is reflected in the huge amounts of art that cover the walls. According to its website, it explores “the ways of inhabiting territory and time in the short term,” and gives all its participants the chance to show off their work in just that way. Every three years, the Tabacalera releases a new theme for the artists, who come and paint, and then enjoy recognition for the next three years. It is constantly changing and being recreated, so that all artists who chose to have the chance to display their work in a safe and legal way.

Though in Lavapiés street art is not always technically legal, the beauty these artists are able to create makes some in the community question these rules.

“I think there should be more legal spaces to paint,” says Alison. “If you give people the opportunity to occupy a space, like with time and proper techniques, it’s going to look better than if someone just comes at night and tries it out.”

The culture and character of Lavapiés is dramatically framed by the art that occupies the area. Even small children, who are not yet able to always understand the meaning of the pieces, admire the way the art takes up the streets.

“I like,” said seven-year old Nacho of the art, taking a break from playing soccer with the other children of Lavapiés. “It’s very beautiful and I go with my friends.”

Such a vibrant and inspiring community could only come of the bold art that inspires others to recognize beauty of their lives. Madrid may not always acknowledge the artistas de las calles, but Lavapiés will never be able to wash its feet of the colors in its streets.