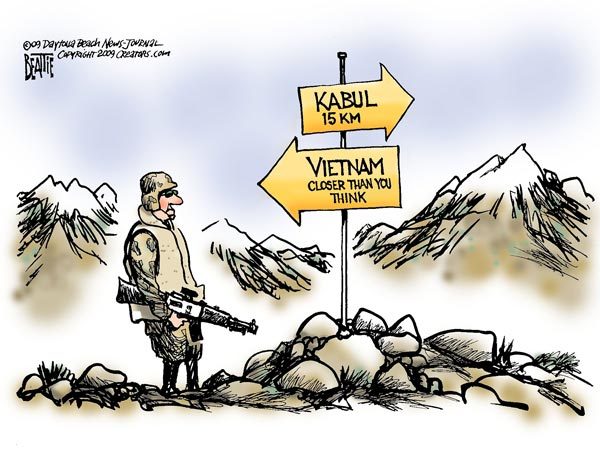 The proximity of Afghanistan and Vietnam | Fabius Maximus

Philosopher George Santayana once said, “Those who do not learn their history are doomed to repeat it.” Santayana’s statements have rung true throughout history, long before he said it and many times since then. It wasn’t until this summer, when I took a Vietnam course at my university; I realized it has been ringing true in the United States for over a decade and a half. Over the three weeks of the Vietnam course we talked much about why North Vietnam succeeded and why the United States, a much more dominant military force, ending up fleeing before South Vietnam was ultimately defeated in 1975.

I began to notice many similarities in those reasons with the reasons the United States is currently struggling to claim victory in Afghanistan. No two wars are exactly alike, but many are eerily similar, and to neglect Santayana’s words would cause nothing but disastrous results. While there are multiple similarities to choose from between the Vietnam War and the War in Afghanistan, this article will focus on just four of the big ones.

The United States became the world’s sole superpower after World War II in 1945 and since then it has been involved in four major ground wars: Korean War, Vietnam War, Gulf War, and the wars in Iraq and Afghanistan (part of the Global War on Terror). Three of those four wars have ultimately been failures for the U.S. government and military, with the lone exception of the Gulf War.

As Michael Schulson points out in his 2015 article for Salon, the United States since World War II has gone to war overconfident about how the war will turn out. Each opponent to the U.S. in its past four wars has been militarily inferior, and the United States military has seen that as a fatal weakness. However, the U.S. has failed on taking account of factors such as getting along with the people of the countries and respecting their cultures; neglected factors that have in fact turned out to be a fatal weakness for the U.S.

No Explanation For Why The U.S. Is There

Similarly to the Vietnam War, many American soldiers fighting in Afghanistan are unsure exactly why they are fighting there, as pointed out in the 2010 documentary Restrepo. Most U.S. soldiers when asked why they are fighting in Afghanistan answer with terrorism and insurgency. This is extremely parallel to U.S. soldiers’ answers over 50 years ago as to why they were fighting in Vietnam, which they answered was to combat the threat of Communism, according to Rotter in his book, Light at the End of the Tunnel.

It is crucial in any conflict to have an objective, but when the objective is vague it is comparable to a weak link in a chain, allowing morale to quickly drop and soldiers questioning whether they are truly the “good guys” in the war.

Billions Of Dollars Spent With No Results

It would most people’s hope that spending over half a trillion dollars in a war would ensure that the war was won; yet in Afghanistan (and Vietnam) the United States saw little to no results in victory or in completing any concrete objectives. North Vietnam ending up defeating South Vietnam in April of 1975, and the Taliban and other insurgencies are still prevalent in Afghanistan today. This flood of massive amounts of money into war leads to the fourth and final similarity between the Vietnam War and the War in Afghanistan, the decline of public support.

Decline Of U.S. Public Support In The War

Both the Vietnam War and the War in Afghanistan saw and have seen massive amounts of money spent and many American lives lost, but with little chance of victory or accomplishing anything important. While the U.S. public may put up with such factors for a little bit of time, eventually it will result in most of the American public calling on their representatives to put an end to the war.