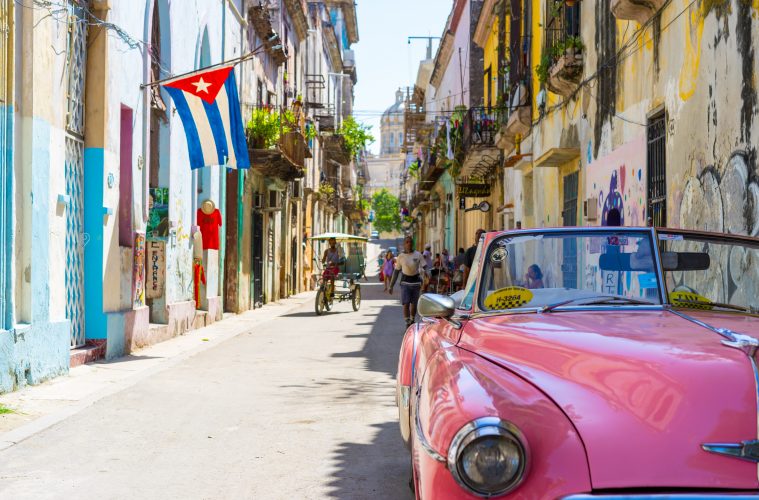 A street in Cuba | Alexander Kunze

With the glitz and glamour of run-down buildings, Cuba offers so much more than history. With many great places to explore and imagine what life was like in the past – from Cienfuegos to Trinidad – Cuba has a lot to offer. However, there are 10 unique spots that you need to visit to appreciate Cuba’s history as well as get those picture-perfect photos.

One of the most beloved restaurants, not only to tourists but also to Cubans themselves, La Guarida is nestled into the backstreets of Havana right next to Chinatown. With a 1940s mansion vibe, the restaurant is just one of many inhabitants of the former La Mansion Camaguey. However, if you are looking to eat at the restaurant, you will need reservations. So ladies, get into those best pin-up dresses and men bring out those victory suits before hitting this gorgeous place on your travels.

La Habana Vieja was named a UNESCO World Heritage site in 1982 and doesn’t disappoint. Throughout this neighborhood you can find some of the most enchanting buildings in Cuba. Decked out in 17th century baroque, 19th-century neoclassical, and the extravagant art-deco forms, La Habana Vieja architecture tells of its glory years. This part of Havana contains many of the best museums in Cuba, such as the Museo Nacional de Belles Artes, an important building in the history of the city and country.

The Malecón boardwalk lies just on the outskirts of the old town. The famous and beloved street of many Cubans, the Malecón butts-up against the breakwater wall and is lined with neoclassical buildings. With the view of Habaneros swimming in the warm Caribbean ocean and fisherman catching their dinner on the wall, the Malecón has become a national symbol of Havana.

What would Cuba be without its vintage cars? Yes, this is a cliché photo; however, why waste a photo on any other car? Roaming the streets of Havana, these 1950s-era cars provide a great look into the history of Cuba. After having your picture taken next to one, get a tour of Havana from inside one! Many of these cars are owned by the drivers; make sure to ask them questions to get a more intimate look at what life in Cuba is like.

A side street close to Chinatown, this richly-colored street brings together the various cultures of Cuban history. From Afro-Cuban art to modern-day Cuban art, this street is a great place to get an idea of the local scene. Not only does the art impress you, but so do the moves of the many dancers swinging to rumba that blasts over the speakers. Finally, if you fancy a dance the Cuban way, visit Callejon de Hamel on Sundays, as there are rumba sessions available.

Just west of Havana lies Las Terrazas, a UNESCO World Biosphere Reserve. A nice day trip away from the hustle and bustle of Havana, Las Terrazas offers a relaxed insight into the life of Cuba’s country life. This area does have a big tourist following; however, unlike many other areas of Cuba, a significant amount of tourists in Las Terrazas are Cubans. In 1968, Fidel Castro made a promise to the campesinos, or countrymen, that he would invest in this area, devastated by hurricanes and Spanish conquistadors, and help lift these people out of poverty – and it worked.

Located in the south of Cuba, Cienfuegos is known for the many colonial buildings around the city. From the French to Spanish to Cubans, Cienfuegos is at the center of Cuba’s colonial history. With the French-style city plan, Cienfuegos is easy to navigate. Make sure to check out the Colonial Museum and the elaborate Thomas Terry Theater.

Located in the eastern part of Cuba, Santiago is the best place to learn and experience the Afro-Cuban culture of Cuba. From mountains to beaches, Santiago de Cuba has some of the country’s best. After getting your fair share of hiking and sunbathing, get those dancing shoes on, as Santiago is the birthplace of the bolero.

Located on the northwestern side of Havana, Viñales seems to be a world of its own. Dotted with mogotes or limestone mountains, Viñales looks more like southeastern Asia than the Caribbean. Not only famous for its unique landscape, Vinales also offers the place where the famous Cuban cigar is made.

Get a sense of colonial Cuba when you travel to Trinidad. Built on the backs of black slaves from the early times of Cuba, Trinidad aligns itself more closely to the indigenous population of Cuba. Not only does Trinidad provide a glimpse into the distant past, but it also has many great beaches on offer.