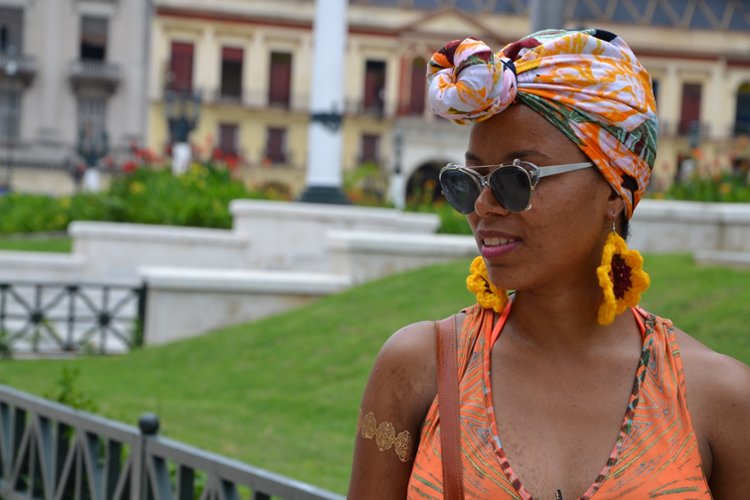 Jessica LeeAugust 1, 2017
CubaTravel1 Comment 1
The following article is published in the #RGNNCuba Magazine: Vol. II, Summer 2017, produced during ROOSTERGNN Academy’s Travel Journalism & Photography Internship Seminar in Havana and Trinidad, Cuba, under the editorial direction of RGNN Expert and Mentor Benjamin Jones. Follow #RGNNCuba for all of our Cuba coverage.

The Cuban capital is not known for its cutting-edge fashion because of the low income of most citizens, as well as a dearth of imported designer wear.

But, like in most countries, there is a vibrant local fashion scene, and on a one-week visit to Havana I managed to seek out and discover that the rule of fashion also applies here. 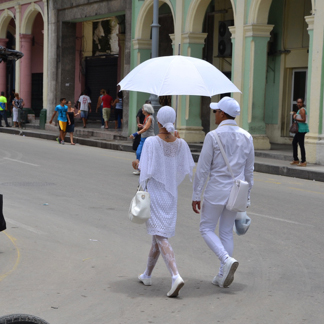 My attempt at capturing street style in the Cuban capital had a rough start. I was turned down by three consecutive locals upon asking to take their photograph, and I couldn’t help but feel lost as to how to approach people in a manner that made them feel as comfortable talking to me as they felt rocking their bold outfits.

As I set out a second time to question and photograph residents, a friend and I wandered into a clothing store that sold 80’s bomber and jean jackets for 73 Cuban pesos (or around $3) and premium denim shorts for 63 pesos. I made note of the fact that clothing of this particular style and quality would be sold at around $40-60 at hip secondhand stores and trendy chain stores.

Upon exiting the store, I spotted a round-spectacled boy in a palm tree print Tommy Hilfiger shirt. I immediately complimented his getup and asked if I could photograph it. He was a natural with the poses. 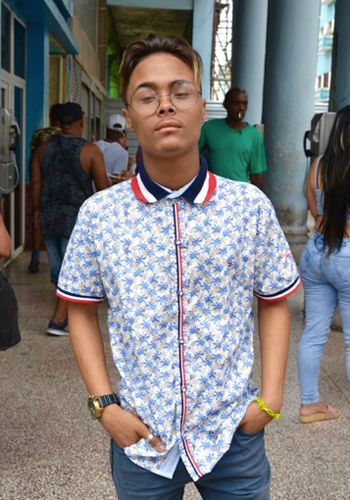 Bravo posed at a Wi-Fi hotspot in Havana. | Jessica Lee

“I wanna be unique, I wanna stand out”, said musician Cristian Alain Nodarse Bravo, 17. I asked him how his outfits come to him, or if he plans them at all. With a shrug and smirk, he explained that they are spontaneously assembled in the morning.

I asked him where he got his clothing, and he described stores very much like the one I had visited earlier. I commented on the low prices tag of the pieces, and he said that even though pretty much most merchandise has to be cheap in Cuba due to the low income, clothes have always been sold very cheaply. He spoke fervently about his music and his passion for rapping and creating hip hop and rap tunes. It was clear that he wanted his style to reflect his swagger and creativity.

I had finally discovered how to take the photographs I wanted: to simply speak the truth and express my admiration for an individual’s getup. I was able to photograph several uniquely fashionable locals this way.

After my serendipitous success shooting street style, I checked out the famous Freixas, a designer space that has been making classic Cuban pieces that have gained worldwide influence, all while maintaining affordability. 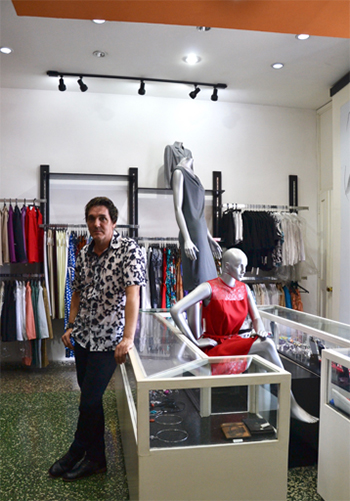 Cuban designer Freixas in his store wearing an original design. They have been at the Havana location for 4 years. | Jessica Lee

The store was crisp and clean, with a few racks of sharply organized clothing of various styles. A rack of leather footwear stood in front of the changing rooms, and elegant artisanal jewelry decorated the shop entrance. The item with the largest variety was the button-down shirt. The designs range from simple white to pink and sewn-in textures.

I spoke with the designer and owner of the store, Mario Alberto Freixas Morales, who explained that his mission,was “to make a national product, a Cuban product that people are proud to wear. Most Cubans don’t wear locally-made pieces, so it makes me proud to see people wearing our line”.

Freixas’ success is unparalleled and remarkable for Cuban fashion andis collection embodies the budding modern, yet timeless, feel of Havana.

African culture permeates Cuba, and I encountered the religious aspect when I stepped inside La Afrocubana. I was drawn in by the rainbow-hued, ornate costumes featured in the store window. Upon entering, I was almost overwhelmed by the vivid and strange relics that could initially seem a bit spooky to a foreigner. Black baby dolls with piercing painted blue eyes dressed in the traditional red and black dress representing the Afro-Cuban diety Elegua, wooden figures of warriors, dripping candles, and multicolored beads created a sense of displacement and intrigue. 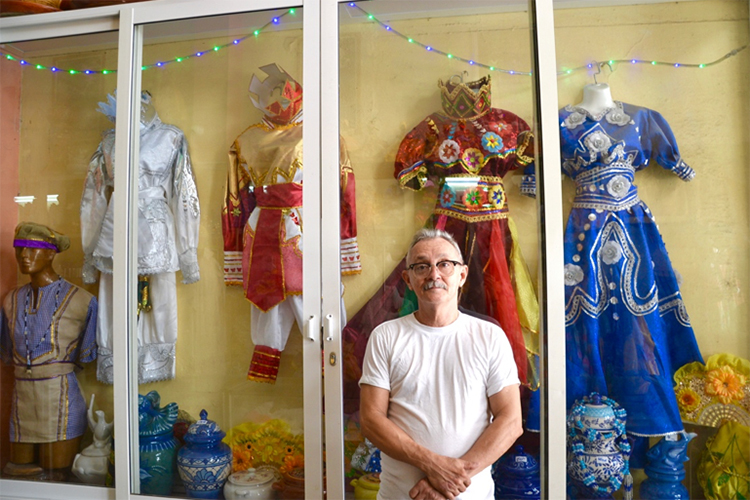 Goq in front of one of many displays of the intricate traditional Yoruban clothing. | Jessica Lee

Francisco Insiso Goq, 64, has been the owner of the religious goods shop for 35 years. I was specifically interested in the costume-like outfits I had seen in the window, and Francisco provided an in-depth history of Afro-Cuban mysticism.

The pieces were traditional Yoruban religious clothing, meant to imitate ancient magical and powerful African kings. “Sales of religious clothing increase during the religious celebrations on the 4th and 17th of December, and the 8th of September,” Goq said. Yoruba, amongst many other Afrocuban religions, is on the verge of extinction in their land of origin due to the influx of Christianity and Islam. La Afrocubana illuminates the fascinating art and fashion culture fostered by religion. 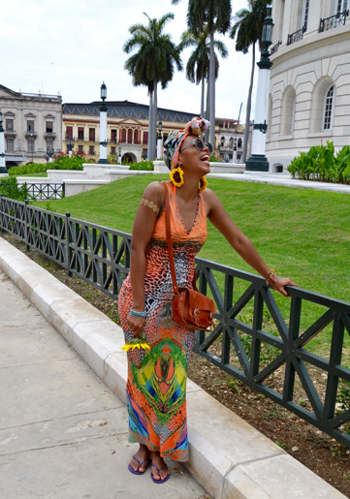 A smile as bright as her dress stood out in front of the Capitol building. | Jessica Lee 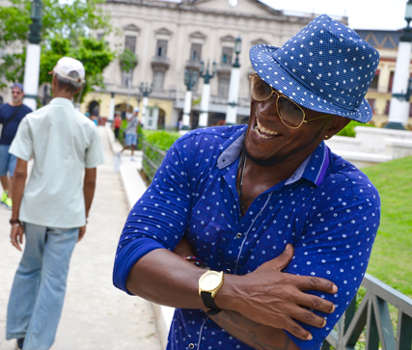 Cool blue on a cool character, just as colorful and vivid as his partner (pictured above). | Jessica Lee

I marveled at the diverse styles and dress I had captured from the streets of Havana while clicking through the images on my computer. Although difficult economic situations have created a ubiquitous minimalism when it comes to fashion, Cubans have managed to embody a style as unique, exclusive, and remarkable as the city itself. Although I had many photos to select and edit, my drooping eyelids forced me to shut my laptop. Within a few minutes, the warm temperature and wine red walls of my hostel room lulled me to sleep. 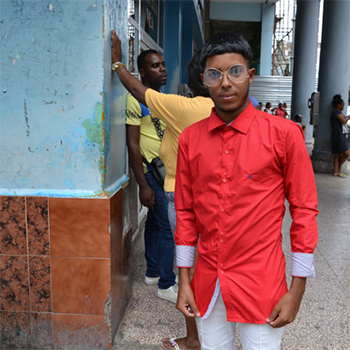 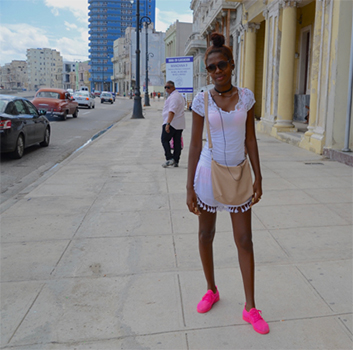 The first fashionable citizen who obliged to have her photo taken on the Malecón, the iconic waterfront of Havana. | Jessica Lee