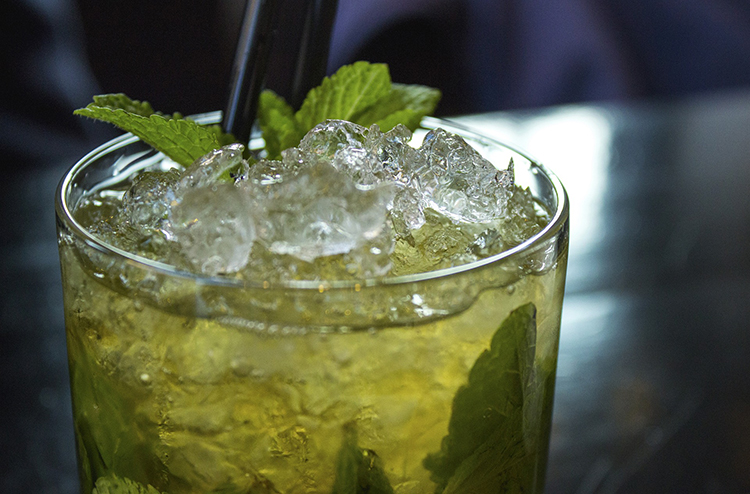 Theodore BodnarAugust 2, 2017
CubaTravel0 Comments 1
The following article is published in the #RGNNCuba Magazine: Vol. II, Summer 2017, produced during ROOSTERGNN Academy’s Travel Journalism & Photography Internship Seminar in Havana and Trinidad, Cuba, under the editorial direction of RGNN Expert and Mentor Benjamin Jones. Follow #RGNNCuba for all of our Cuba coverage.

Minty green leaves and stems floated in my first Cuban drink while I listened to traditional music playing in the background. The friendly bartender curiously asked how my mojito tasted. With limited Spanish, I replied, “muy bien.” I was excited to finally begin my long-awaited Havana bar crawl.

This was my initial experience at a Cuban watering hole, and boy, did it not disappoint. Casa Cantabria De La Habana was exactly the type of bar one would want to try for their first taste of Havana. The president of the company which owns the bar, Reynaldo Rojas Marquez, was delighted about the idea of someone covering the local bar scene.

The bar was originally founded by Spanish members from the region of Cantabria, and is owned by 22 stakeholders. After a brief history lesson Marquez insisted I have a drink, “Try our famous cocktail, it has special ingredients that other bars don’t have around here,” he urged. This mojito was a grade A cocktail, and is my favorite drink I tried while in Havana.

While sipping on the cocktail, I enjoyed the vibrant violet-colored bar and the simple and elegant tones of the bar’s interior. Marquez gave me a great discount on the drink and gifted me a book with his signature so that I had a nice souvenir to recount my first Cuban drinking experience.

The next day I decided to hit another close-by establishment where locals can come to drink after a long day. I hit a rather large joint called Neptuno Bar and was unlike many of the typical bars that I have gone to in the United States.

Sitting next to a tired, but knowledgeable local I was given an intriguing excerpt about his childhood where he spent much of the time around Neptuno Bar.

“This place has been around since I was a kid and the stools and bar are still exactly the same as when I was young. It could be over 100 years old. It used to be owned by the Spaniards, but is now owned by the state.” Andres Contino, also detailed that the bar was a nice place to stop by and have a few drinks at the end of the day, “We come here after work and don’t want to hear loud music, but rather relax and talk with one another.”

Neptuno does not try to stick out, instead it shines because of the simple and dated-looking Cuban décor. Traditional Cuban music is played at low volume during the day, but after 6 p.m. the volume gets turned up. It also is very affordable which many of the locals look for when they are winding down after a tough day.

My final destination reminded me of a lot of the bars that I am familiar with back home. A dark dive bar, Prado 264.is a restaurant-bar which has dim lighting and flags from many countries adorning the walls.

Most of the customers were taking shots of the fiery local rum or enjoying more than their fair share of beers. Something that differentiated this place from most American dive bars was the lack of music. Prado had no music, but the televisions provided a calming background hum.

One drinker described the bar this way, “We drink a lot, and when we see our friends come from work we drink more. It is also a nice spot because a lot of the local bars don’t have air conditioners or television sets like they do here. The pizza here is also a good bar snack.”

Miguel said he grew up around the place and has been coming there since he was a young boy with much of his family.

While leaving the bar, I decided to buy him a beer, and was myself rewarded with a puro, which helped me expand my experience of the Cuban practice of having cigars with drinks, an uncommon practice in the United States. This final experience will always remind me of how kind, or drunk, the folks at Cuban bars can be.

Reflecting on the past week at these bars helped me further appreciate Cuban culture a lot more so than any of the other activities I participated in while in Havana. From my favorite mojito, to the strong cigars I had while sampling the tropical cocktails, these will be fond memories I will carry with me for a long time. I will forever cherish the genuine conversations and strongly poured drinks I had whilst in Havana.

Neptuno Bar, corner of Calle Neptuno and Marquez Gonzalez, 9:45am- 10:45pm. The bars most popular drink is the mojito which is 5 CUC. The standard price of Polar beer is .50 CUC.