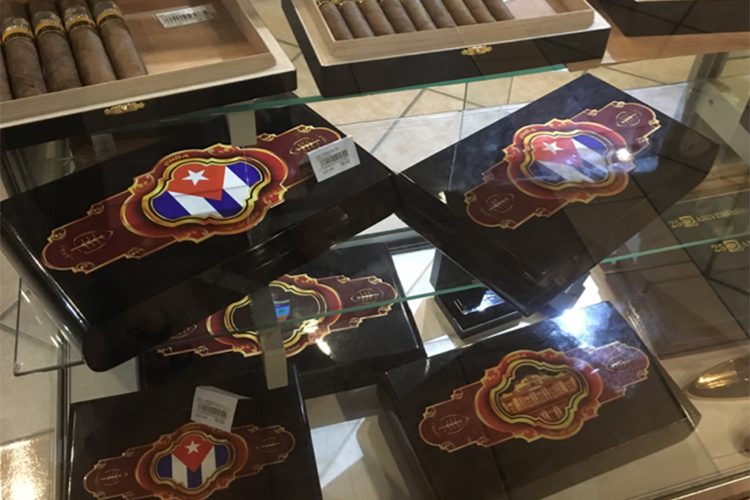 Katie BandishAugust 2, 2017
CubaTravel0 Comments 0
The following article is published in the #RGNNCuba Magazine: Vol. II, Summer 2017, produced during ROOSTERGNN Academy’s Travel Journalism & Photography Internship Seminar in Havana and Trinidad, Cuba, under the editorial direction of RGNN Expert and Mentor Benjamin Jones. Follow #RGNNCuba for all of our Cuba coverage.

A warm, dim glow illuminated my petite table, which was cluttered with espresso dishes, as I waited to taste my first Cuban cigar in Havana.

The ambiance of the gentle breeze and soft bass of house music on the terrace was perfected when my waiter, Lester, presented me with a Cohiba Robusto.

As I was a virgin cigar smoker, Lester explained where to cut the cigar and lit my Cohiba for me, which expelled a strong, yet sweet aroma. I was told to dip the other end in honey to enhance the flavor and as I puffed away, I could feel my tongue slightly tingle and began to feel a nice buzz. I couldn’t help but wonder what makes Cuban cigars so sought after. 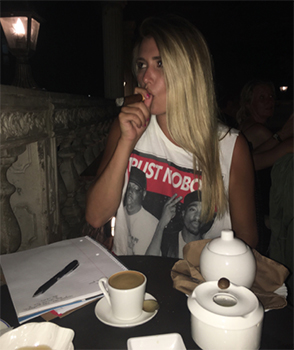 My first time smoking a cigar (Cohiba Robusto) on the terrace of La Concordia in Central Havana. | Katie Bandish

If you’ve never been to Cuba, you should know that it is an incredibly humid place. I’m talking about the kind of humidity where you can’t tell if you just got out of the shower or you’re just sweating type of humidity. This weather is the best environment for harvesting high quality tobacco leaves, which is considered the most important part of the cigar.

Yacine Jemil, 28, of Cleveland, Ohio, who was also visiting Cuba told me that compared to cigars in the States, those from Cuba are drier than the cigars here.

“If you were to bend a cigar back home it would break in half. Here, in Vineles, the most important place where tobacco is harvested, the guy bent it in half and it didn’t break, that’s how wet the leaves were. I’m not a big smoker but I bought a 15-pack to bring back home.”

Most cigars come from a blend of tobaccos foreign and domestic but Cubans only use homegrown tobacco, which is how they get their strong, authentic smoke. Tobacco has been grown in Cuba for hundreds of years and cigars have been produced since the time of King Phillip II of Spain.

It is estimated that it takes about 100 steps to properly produce a cigar from the time the seed is planted to harvesting the crop, to drying and fermenting the leaves, to rolling and then sending them out for consumers to buy.

Cuba’s cigar industry is under direct government regulation explained Lester Bollo, 39, of Havana who is the manager of La Concordia restaurant and a dedicated cigar aficiando, adding that the quality of the cigar is equivalent to the price.

Bollo warned against not buying cigars from an official dealer.

“Never buy off the streets because you don’t know what you are buying and it won’t be a good cigar. My favorite brand is the Hoyo de Monterrey.”

The Warranty Seal for Habanos, as Cuban cigars are known in Spanish, have been used since 1912 and the most updated version has a hologram, and an individual bar code that is unique to each box.

The Denomination of Origin seal appears in the upper right end of all Habanos packages. The Institutional Block is a hot-stamped mark that appears at the bottom of all Habanos wooden cases on the back of cardboard packages and contains all of the elements that identifies the product. You can do an authenticity check on the Habanos website by entering the 13 digit bar code. 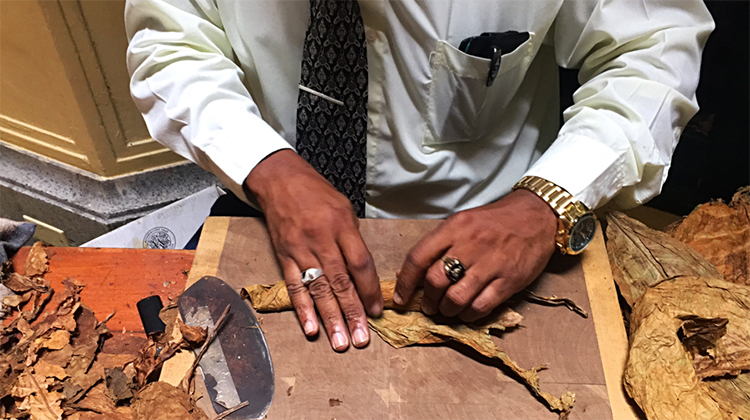 Monteaqudo rolling a Montecristo No. 2 downstairs at his stand in front of the cigar and gift shops at Hotel Sevilla. | Katie Bandish

Raul Monteaqudo de la Torre, 50, of Havana, has been rolling cigars since 1981 and currently works inside the upscale Hotel Sevilla, where you can watch him roll a cigar from start to finish.

“It takes me ten minutes to roll a ten rack. The prices depend on how much you buy, what brand you buy, and who you buy from.”

Just like Lester, Raul warned me as he simultaneously rolled and gnawed on a cigar, to not buy cigars off the street. 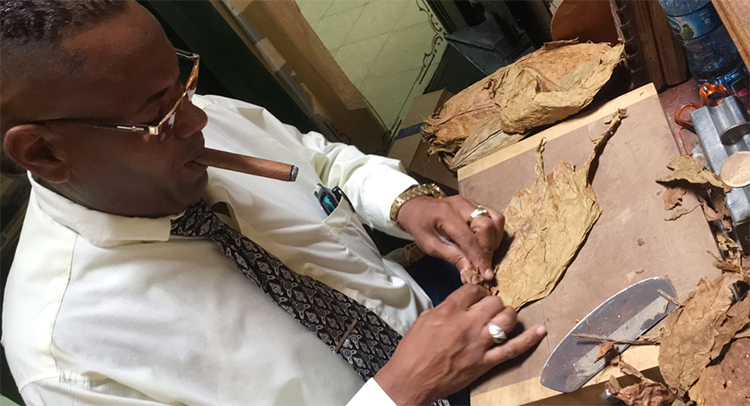 “You’ll get bad cigars that taste like shit. I don’t have a favorite kind of cigar brand though; I like them all. Cohibas are the most popular cigar but Montecristo No. 2 are similar and just as good.”

I asked several Cubans from waiters to security guards if they smoked cigars and much to my surprise, they said no. However, locals and visitors tend to prefer different brands of cigars. Onus Mustelier, 35, of Havana, is the doorman at La Casa del Habano, one of the most popular cigar shops in Old Havana. He sees both locals and visitors come in and peruse through the shop.

According to NPR, most cigar users in the United States are teens and young adults. As of 2012, about 13.4 million people age 12 and older smoke cigars.

While most cigar aficionados will rave about the taste of a Cuban cigar, I wasn’t obsessing over it. While the initial taste of the smoke was delightful, the after taste was grimy and felt thick on my tongue.

Finishing my cigar on the terrace, Lester made sure I was delicate with my Cohiba and informed me not to ash or put out my cigar.

“Cigars are like gentlemen, they should live and die alone.”

Prices: Prices vary on where you buy from, how much you buy, and what kind you buy. The average price that I found varied between 8 CUC to 11 CUC (around $8 to $11).