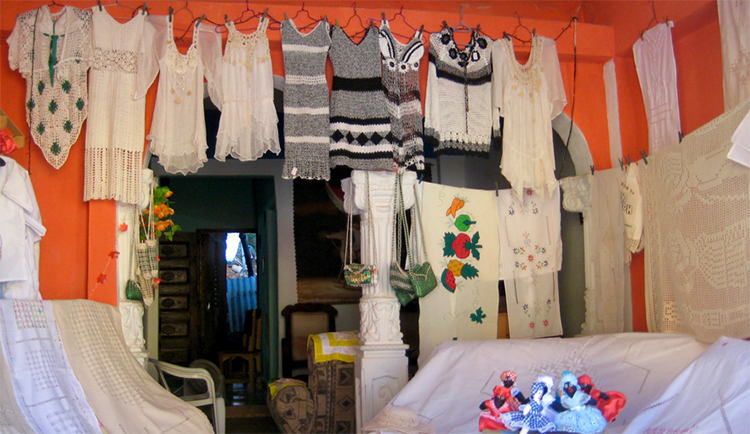 Crochet dresses for sale at a local store | Mattie Ellis

Woven by Charm and Tradition: The Crochet Culture of Trinidad

Mattison EllisAugust 3, 2017
CubaTravel0 Comments 2
The following article is published in the #RGNNCuba Magazine: Vol. II, Summer 2017, produced during ROOSTERGNN Academy’s Travel Journalism & Photography Internship Seminar in Havana and Trinidad, Cuba, under the editorial direction of RGNN Expert and Mentor Benjamin Jones. Follow #RGNNCuba for all of our Cuba coverage.

The unremitting Caribbean sun filled the fractures in the cobblestoned streets of Trinidad, Cuba, as I walked through La Plaza Mayor’s daily artisanal market. Although limited in resources, the Trinidadian people pour their passion into craftsmanship with an enthusiasm only matched by the city’s evening salsa club promotors.

Wooden crafts, acrylic paintings and turquoise jewelry decorate splintered tabletops, makeshift stages for the craftsmen and women singing ‘Mira, Mira!’ to attract sweating tourists. I made my way to the last shop in the marketplace, an inviting wardrobe of crochet clothing and accessories – Trinidad’s needlework tradition for nearly five centuries.

“It’s part of the culture of Trinidad,” professed Mery Viciedo, “It’s a way to support the family and community.” Now 70 years old, Viciedo began crochet and embroidery over 40 years ago in her hometown of Sancti Spiritus. Regarded as la experta de crochet by locals, Viciedo holds many titles as a historian, author and instructor of the craft. She has also earned public recognition for her research into how crochet has evolved since 1587, the date to which archaeologists assign needles and thread remnants found beneath Trinidad’s dusty town center.

Like other Spanish colonial communities, Trinidad’s needlecraft originated as an activity for housewives to prepare clothing for their families and furnishings for their homes. At the end of the 19th century, Cuba experienced an economic depression that transformed the recreation into a trade. As women sold their crochet work to support the local economy, they also began sharing their techniques with other women seeking to learn the craft.

Less than a century later, however, the country was shaken by a greater change—the 1959 revolution. The multi-generational trade could not withstand the trying time, and as a result, many original crocheting methods were lost.

Emilia González, a close friend of Viciedo’s, recalls watching her tía relearn the craft during the revolution. Inspired by the delicate and detail-oriented art form, González then followed in her aunt’s footsteps and has now been practicing crochet for over 50 years. Despite the challenges of the practice, González describes crochet as “a social activity for families and friends.”

After a decade-long investigation into the evolution of Cuban needlework, Viciedo published her findings in the craftsmen journal, Tornapunta. She found that despite the loss of its original style, Trinidad’s art of crochet has since been revitalized. 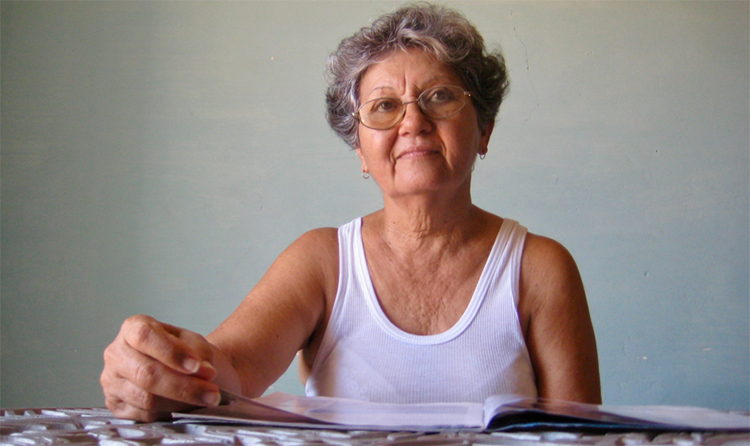 More recently, Viciedo has expanded her anthropological project into a business called Siempre a Mano. Loosely translated as ‘Always Handmade,’ Siempre a Mano is a sociocultural venture to recover and maintain the traditions of the seamstresses from Trinidad, which according to Viciedo, “constitute the city’s cultural identity.”

But, she explains, it required more than just solo work.

“After many years of working alone, I realized it was important to share the technique and begin teaching classes,” said Viciedo. Pursuing this affirmation, she now hosts weekly crochet classes for women of all ages at Trinidad’s Museo de Architectura, an inviting blue building in the middle of La Plaza Mayor.

Over the course of three to six months, Viciedo teaches devoted locals the craft of their ancestors using her own manual of updated crochet styles. At the end of the session, her students’ work is exhibited in La Casa Malibran, a local art gallery open to the public. In addition, the women receive a certificate from El Centro Universitario Julio A. Mella de Trinidad, a significant accomplishment that legitimizes their hard work.

Another recent addition to Trinidad’s crochet community is Casa del Crochet, the artisan-backed boutique selling enough cotton scarves for a Midwestern winter. Owned by local Lianis Hernández Carpio, the store’s floor-to-ceiling kaleidoscope of crochet covers up any evidence of lost techniques and impresses its customers with modern designs. Casa del Crochet now boasts the work of over 40 Trinidadian female artisans, who work cooperatively to display authentic and contemporary designs. 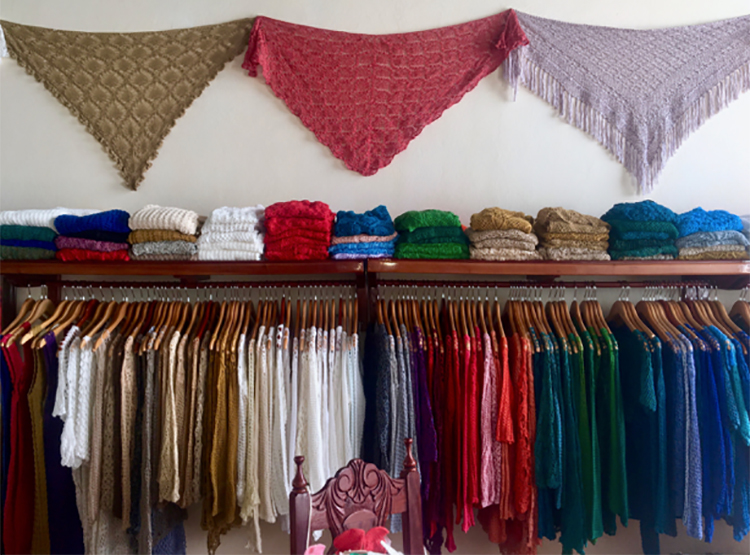 “Todas son únicas!” (“They’re all unique!”) boasted Fatima Hernández, an employee of three years, as she held up an array of trendy beach cover-ups. According to Hernández, the store welcomes an equal number of tourists and locals, both looking to model the timelessly stylish clothing. The store also offers various crocheted accessories, from flowery backpacks and purses to neon toys and baby shoes. My favorites were the intricate earrings and macramé bracelets that go for 5.00 to 12.00 CUCs (around $5 to $12).

While Casa del Crochet certainly takes the cake as Trinidad’s epicenter of woven designs, crochet clothing and accessories can be found at nearly every market and shop around the city’s lively neighborhoods. So, whether you are looking for an easy-to-pack souvenir or a knit dress for your excursion to nearby Playa Ancón, Trinidad’s crochet vendors have got you covered.