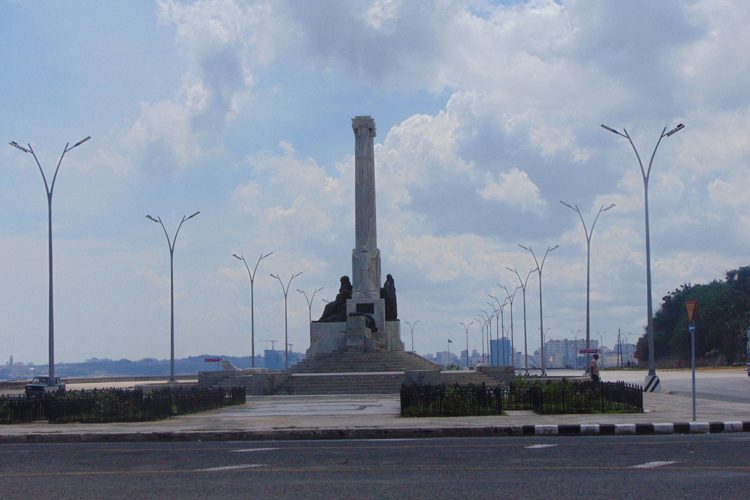 A Day in Havana’s Vedado District

Visiting Cuba often seems like one is entering a time machine, and the feeling is even stronger in the island’s capital. One could easily spend their time in Cuba wondering at the colonial architecture and bustling streets of Old Havana, but there is a more modern side of the capital just a few miles west.

Known as the official district of Plaza de la Revolución, Vedado gives tourists a taste of contemporary Cuban culture. Surrounded by high-ceilinged mansions and a small cluster of skyscrapers, the streets of Vedado express a certain serenity. However, don’t let that tranquility fool you, the residential neighborhood is now home to around 175,000 habitants and it has some of the best nightlife, theaters and restaurants in the city. 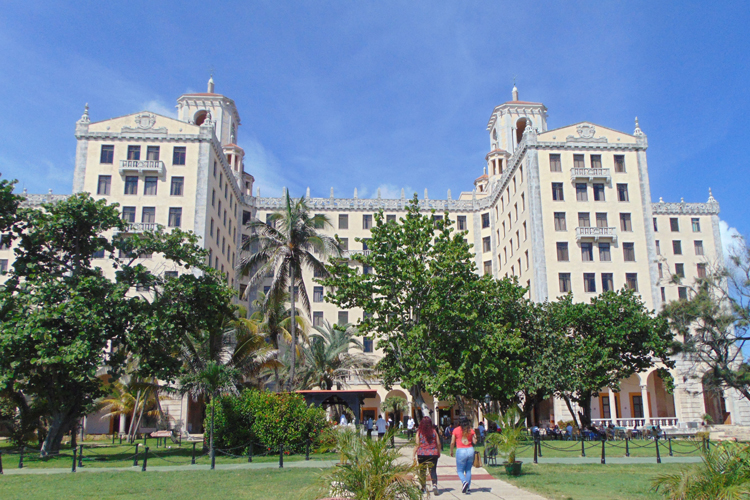 View from the garden of Hotel Nacional | Freixys Casado

Cuban life is best experienced on foot, but when one is staying in Old or Central Havana, and wants to visit Vedado, it may be better to take a taxi or one of the bright yellow Coco taxis for 5 CUC’s (or around $5). Once there, the best way to start your day is to visit the Hotel Nacional, which was constructed in 1930 and has become a symbol of Cuban identity.

Every day at 10:00 a.m. for 5 CUC’s, the hotel allows visitors and guests to take a tour around the eclectic and neoclassical-style building. During the tour, tourists get to walk through the halls plastered with the names and faces of the many known-figures who have stayed in it, for example Matt Dillon and Mario Benedetti, as well as American Mafia chiefs Meyer Lansky and Lucky Luciano.

“The U.S. Mafia met here,” said Estella Rivas, 76, who is a tour guide for Hotel Nacional. “They used Frank Sinatra’s concert as an excuse to gather. There was a secret room connecting Sinatra’s and Lansky’s room.”

The room is now referred to as “the Mafia room.” Rivas explained that a guest can stay in the room for 800 CUC a night.

The second part of the tour includes a visit to the gardens where guests and visitors not only find a beautiful ocean view, but also a 1962 Cuban Missile Crisis exhibit where they can go inside the Cueva Taganana (Taganana Cave) which was used as a bomb shelter during the crisis. 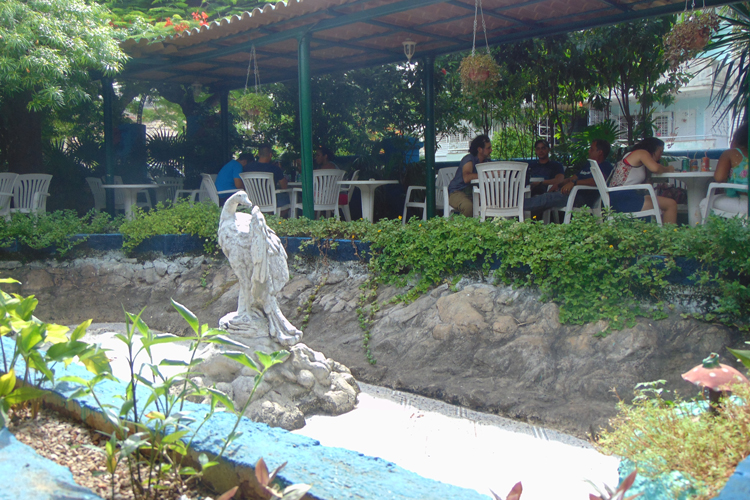 A great place to grab a bite after almost two hours of learning about Cuba’s resplendent past is Cafetería La Fuente. Located at the corner of Calles C and 9, this restaurant-cafetería sells a variety of criolla (traditional Cuban) food and gives tourists the opportunity to be surrounded by locals.

One of the unique aspects of this place is that it is self-service. Customers can order the food at the counter and if they want a drink, they can grab it from the fridge. The setup of the place gives a very relaxing vibe; it is surrounded by a variety of vegetation and has an open sky view.

“Customers here not only see, but also interact with nature,” said Roberto Sanchez, 45, who has been working at the cafeteria for 18 years.

Sanchez also mentioned that one of the most popular dishes is masas de cerdo asadas (roast pork), which cost 4.85 CUC’s. All main platters come with rice, root vegetables and fresh vegetables. They also have a variety of seafood platters, appetizers and coffee.

After a filling meal, if you’re looking to rest, sit down and enjoy the breeze, then head over to Calles 17 and 6. There you will find kids riding bikes, ongoing conversations, women coming from yoga class, and you might even be able to take a picture with a rock and roll icon. 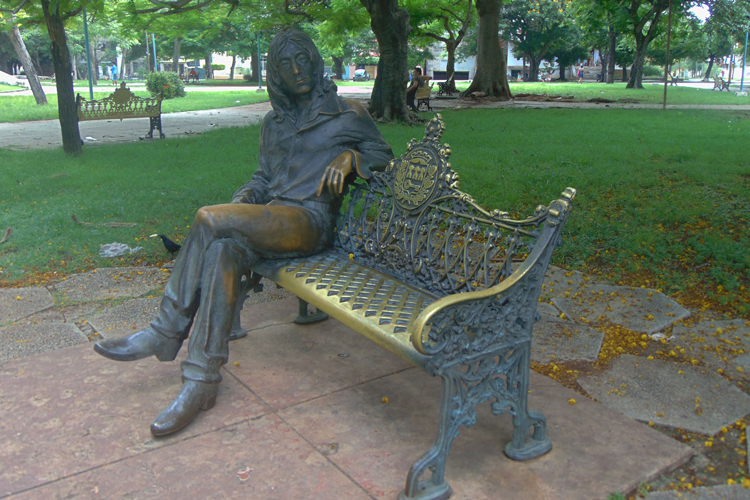 The John Lennon Park was inaugurated in the year 2000 and it carries that name because on one of the benches there is a statue of the Beatles member.

“Before and even after the revolution that music used to be prohibited,” said Yendry Subiaute, 30, who is a Coco taxi driver. “However, people would still listen to it in secret.”

The location is now a tourist must see, especially because right in front of it is Submarino Amarillo (Yellow Submarine), a place which welcomes any type of music as long as is part of the rock genre.

After a nice couple of hours at the park, ice cream does not sound like a bad idea for a snack. One popular place among locals and tourists which is known for the one-hour-long lines is Copellia.

The state-run ice cream shop opened its doors in 1966 as a social project for the Cuban Revolution, and although the flavors are very limited and sometimes scarce depending on the day and time, the flavor and affordability make it a must for locals.

“One ice cream scoop is 50 cents,” said Rodolfo Lorenzo, 70, who has been a customer for almost 60 years. “The ice cream salad, which is three scoops, is 1.50 Cuban pesos and you won’t get that deal anywhere else.”

Copellia serves between 12,000 and 17,000 customers daily, said a server who asked to remain anonymous. The shop is made up of three different areas, which vary by the currency the customer decides to pay with. They even have an area for those who want cones with their icecream and here they charge in CUCs. 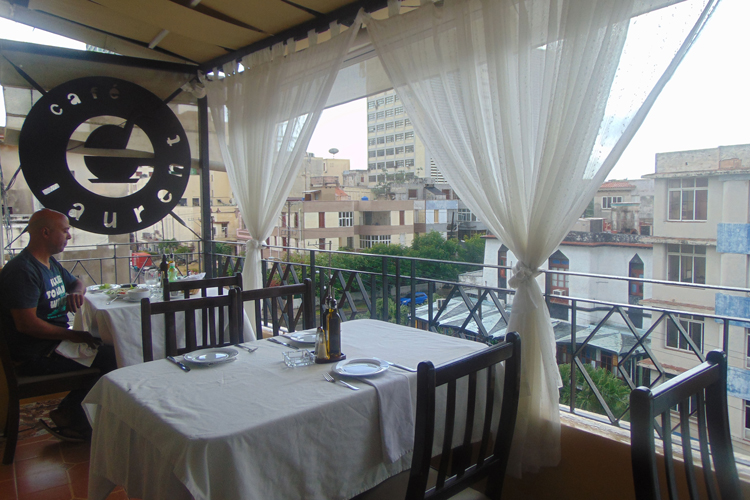 Men dining at the terrace of Café Laurent  | Freixys Casado

When in Vedado, one must try one of the many paladares, which are family homes that have been transformed into restaurants. A very popular one is Café Laurent, a sophisticated and luxurious restaurant hidden on the top floor of a 1950s building.

The restaurant opened seven years ago, and specializes in international food with some Cuban dishes in a more stylized way. One of their current popular dishes is pescado en salsa verde (fish in green sauce), which costs 12.50 CUC’s. The fish is grilled with shrimp and topped with a green sauce made of parsley.

One of the special features of Café Laurent is its terrace. The tourists, which compose most of the clientele, love watching the sunset from there. 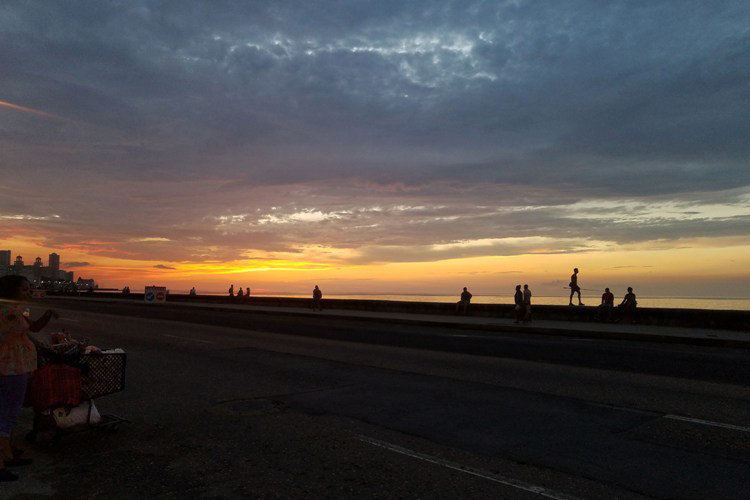 View of the sunset from the Malecón | Freixys Casado

After such an eventful day at Vedado, one last but not to be missed experience is to walk along the Malecón as the sun sets.

When walking around the authentic avenue, besides the view of the sea, one can witness teenagers on dates, kids playing, socializing, drinking beer, dancing and taking pictures of the marvelous setting of the sun.

The capital’s uniqueness lies in its neighborhoods and what each one has to offer. One must definitely experience Old and Central Havana, but if one wants to see where Havana may be heading, Vedado is definitely a must.

Corner of Calle C and 9th street.
Opening hours from 8:00 a.m. to midnight.