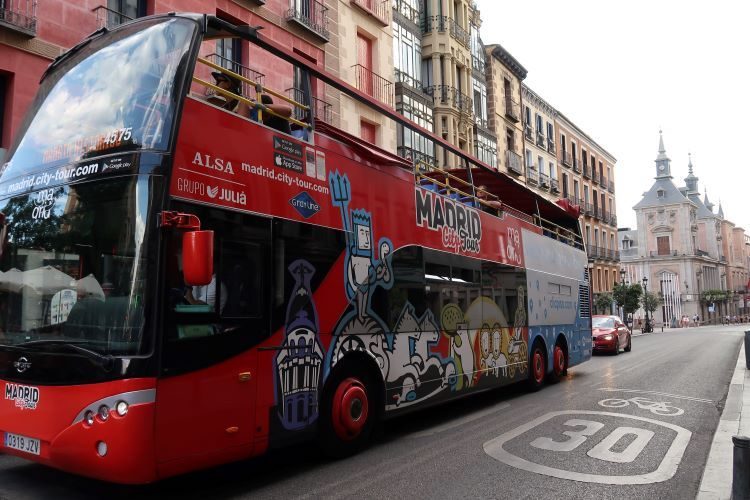 Every capital city has its story. Madrid, a true melting pot of color and culture, carries distinctive barrios, or neighbourhoods, each offering their own perspective with different ways to see the city.

In Malasaña, the hubbub of the main shopping district spills into the nightlife and crowded streets. Wherever you go, a cool glass of tinto de verano—a red wine spritzer—is thrust into your hand, offering a smooth and refreshing break.

South of here, the smells of tapas and wine dissolve into curry, with Spanish running into Bengali as we reach Lavapiés. With cobbled medieval streets and old Spanish taverns side-by-side with Senegalese restaurants and Chinese takeaways, this neighbourhood is the true crisol– cultural melting pot – of the city.

Further north, beyond even Malasaña, is the luxury district of Salamanca, with a rich history (and people), with exclusive brands and historical monuments punctuating the area.

These three barrios provide the perfect platform to launch our tour of Madrid.

Lavapiés sits in the southern quarter of the capital city, with the paved streets leading downhill into the heart of this bustling, multicultural community. The main hub is the Plaza de Lavapiés, roughly translating the Square for Washing Feet, which possibly refers to the fountain in the plaza that no longer exists. Walking up Calle de Lavapiés, one would be forgiven for thinking you were walking through a street in Delhi, with Indian restaurants lining either side of the road.

The warm scents of tandoori chicken and garam masala fill the air, tempting travellers away from tapas and into curry houses. One such would be Taj Mahal, prominent on the street and known for its sizzling mixed grills and offering chicken, which most Spanish tapas lack. 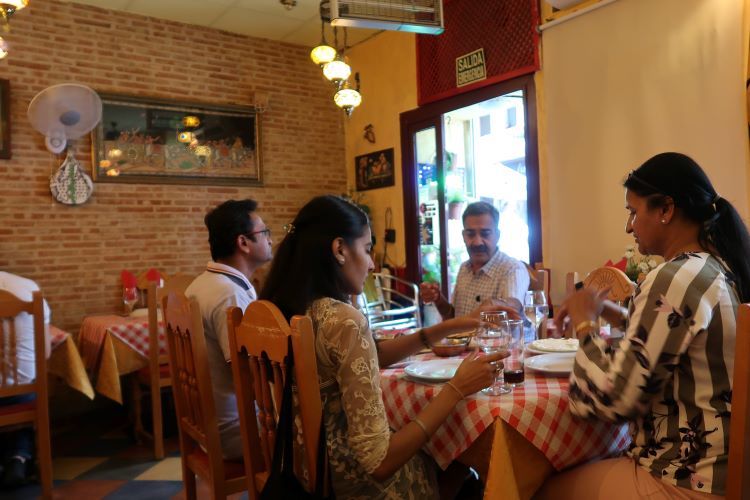 The manager, Rajju Dewan, 43, told me that Lavapiés offers something special to the immigrant population there. There is a feeling of acceptance and welcoming, “our friends, [our] families come here and so we [came] to settle too. It’s a really nice neighbourhood”. If you’re looking for good food from the Indian subcontinent, Rajju and the Taj Mahal would be happy to oblige, with a mixed grill for two costing just €16,00 (£14.00).

The cultural hub of the district is La Tabacalera, an old tobacco factory turned exhibition space. Passing by the bustling Mercado de San Fernando, with vendors selling everything from meats and fish to books and clothes, not to mention the restauranteurs, the Tabacalera stands to attention, prompting hush from passers-by. 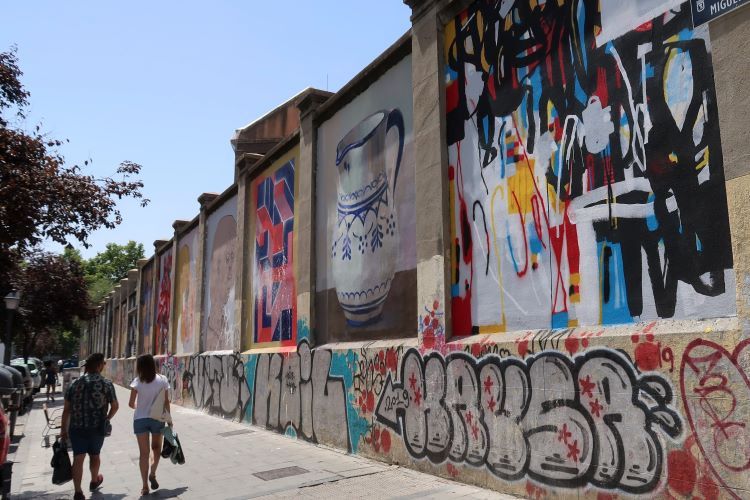 Exploring the perimeter is a long process as everyone slowly meanders around, taking in the art painted on the walls. Inside, the atmosphere is thick with drumming and the smells of alcohol. Often regarded as a local museum, the Tabacalera breathes new life into the neighbourhood and displays art from contemporary artists, whilst hosting music and dancing to keep people engaged. Check out their website to see what’s going on before visiting.

As the sun sets over the terraced flats, the hubbub turns north of Lavapíes, with Madrid’s young people heading towards their preferred zone: Malasaña. Known widely to be Madrid’s trendiest neighbourhood, it represents the beginning of democratic Spain and rejection of Francoism. The alternative lifestyles are prominent in this barrio, with bright hair and tattooed bodies decorating the narrow streets, already heavily graffitied. 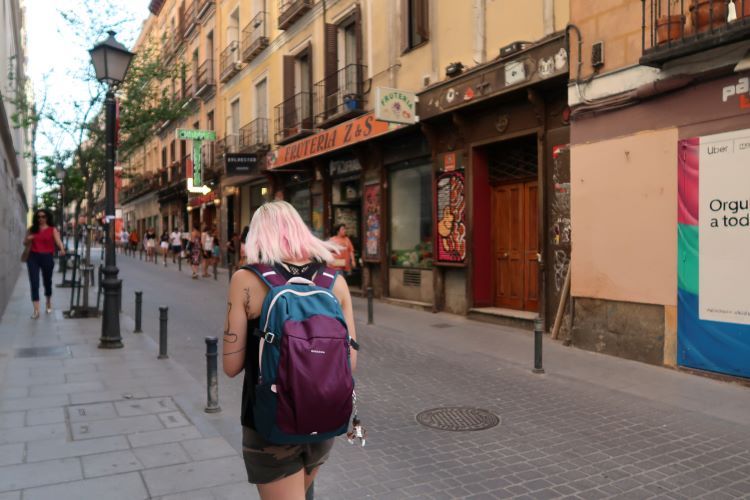 If there’s one thing this barrio is rich in, it’s character. The street-level walls and shutters are full of anti-fascist graffiti, starkly contrasting the delicate balconies directly above. I spoke to Jorge Clavaguera, 37 and a lawyer, who grew up in the area and moved back after a brief stint in London. “Malasaña always gives you that sense of ‘belonging’…it’s more modern, more forward-thinking. It’s cool!”

Spoilt for choice, I went with Jorge’s recommendation of the “classic”: the original Movida bar, which refers to the alternative cultural movement that exploded onto the scene in Madrid after the fall of the Franco dictatorship in 1975. Opening in 1979, at the height of La Movida, La Vía Láctea was cutting edge, offering punk and rock music and a safe space for previously persecuted people. The history is thick on the walls, covered in posters and pamphlets from the era, with the music beating through your body until you make your way upstairs, where glow-in-the-dark art adds to the psychedelic vibe. 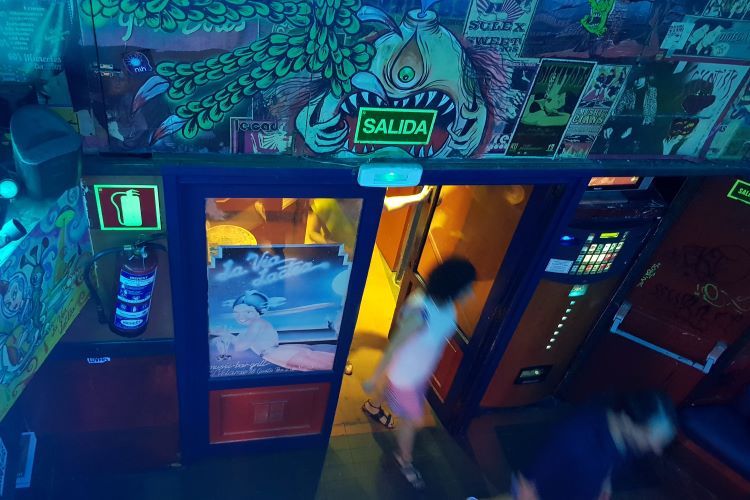 Around here you’ll find endless bars, each with their own quirks, such as Tupperware or Madrid Me Mata, though you’re less likely to find reggaeton and more likely to hear old rock and roll classics. The average beer is around €3,50 and spirit and a mixer is around €7,50 (which is great value considering that vodka makes up about half the drink).

Of course, there are other, more modern and less political bars, like Ojalá, with its unique “tropical beach” vibe, offering a more casual dining and drinking location. Locals might opt for some tapas on the terrace, with nachos costing just €5,50. Inside, the coloured lights offer a fiesta vibe that can only be matched by the botellón– drinking on the streets – going on outside.

But the real attraction at Ojalá, as David Flynn, 22, a recent graduate from Kentucky, USA, noted “[is that] downstairs is a great surprise…the floor [is] full of sand and cool lounge chairs,” really bringing a new vibe to the heart of the nightlife. The streets are still buzzing long after 1:30am, when the metro closes, and by 4am, the taxi business is back in action.

As one generation puts themselves to bed, another rises, beginning their days in Salamanca with a coffee and pastry for most (and even the occasional glass of wine). Here the upper-middle class gathers their energy, ready to roam the vast parks with their tiny chiuhuahuas, while camareros (waiters) line the streets to attract the most upscale clientele.

Beginning the day with a pastry from Manolo Bakes, an artisanal pastelería, breakfast starts at, €3,50 depending on the intricacy of the baked good. A warm croissant and strong café con leche (coffee with milk) are long overdue. The finer pastries are delicately formed, much like the bright white building facades and balconies that house them. 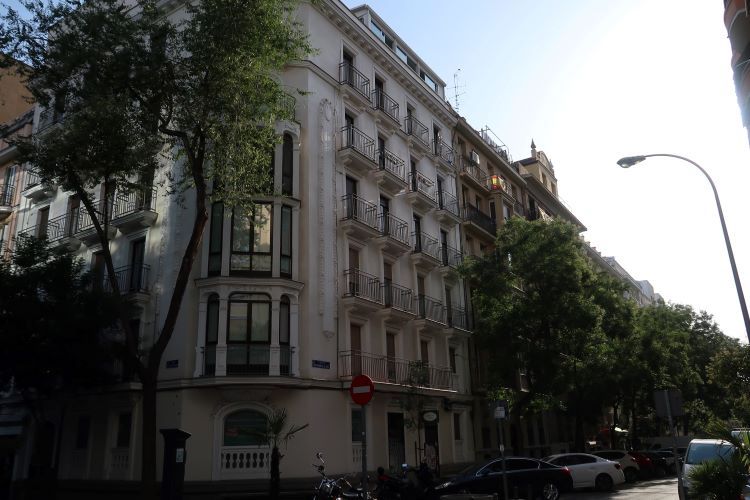 The sleepy streets feature older clientele enjoying the slower Spanish lifestyle. From 10am the terrazas, cafes whose seating sprawls into the streets, are filled with older women sipping coffee and men with beer or wine. Not to mention the small dogs roaming the streets alongside their owners.

As you walk along the warm pavement, cafes and tapas bars transform into high-end fashion boutiques, with Bimba y Lola, Gucci and Chanel taking the top spots. The perfect place to go on a shopping spree, Salamanca’s shopping district caters to the luxury market. Women strutting between stores while their partners, laden with shopping bags, trail behind is a common sight.

And a short walk away leads us to the Paseo del Prado, a long line of lavish cafes and boutiques paving the way to the Prado Museum. Stop by the Plaza de Colón, a tribute to Christopher Columbus and his discovery of the Americas, which helped Spain expand its empire all over Latin America. The Plaza de Colón provides a beautiful photo op and a break from shopping (for those who need it) before you launch yourself back into Madrid’s bougiest barrio.

With so much on offer, it’s no wonder that Madrid has become one of the world’s top capital city destinations. It’s not far, but far less saturated with #BritsOnTour, so the atmosphere is quintessentially Spanish. Book your flight now and stay in one of these amazing districts – you’re practically a Madrileño now!