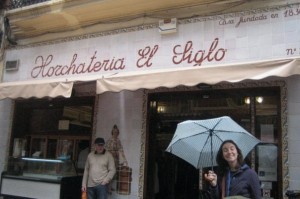 Study Abroad in Madrid and Córdoba via Middlebury College

MADRID, SPAIN. One year abroad, two different cities. Elisabeth McMorris spent one semester in Córdoba before coming to Madrid. Here, she reveals what it was like to come to the capital.

Could you tell us a little bit about your educational background? What were your goals in coming to study in Spain?

Elisabeth McMorris: I was an International Studies Major with a focus in Art History, Europe and Spanish, at Middlebury College. When I went to study in Spain for the year, I was going into my junior year. I had studied Spanish in school for a number of years, but was ready to stop learning in classrooms and just immerse myself in the language. So language fluency and ability was one of my primary goals.

Another goal was to experience as much of the culture and people as possible. So that included going out for tapas, theater, museums, parties or even taking weekend trips to other parts of Spain to experience new parts of the country, cuisine, culture.

As an art history student, I was also particularly interested in seeing the art and architecture first-hand, rather than through slideshows. I made a point of visiting important building, castles, cathedrals and museums.

Did you end up meeting those goals?

I would say yes. In terms of language, I attended the Middlebury Summer School the summer before going to Spain. This seven-week immersion course really helped me become more confident in Spanish. Middlebury requires you to sign a pledge that you will only speak Spanish in Spain, even with other Americans. This may seem awkward at first, but I found it to be immensely helpful. The pledge allowed me to practice phrasing and pronunciation in a relaxed setting, where I didn’t feel silly for making a mistake. Having to speak in Spanish makes you faster and more confident, enabling you to communicate even better with Spaniards. I surrounded myself with Spanish – in school, with friends, with an language exchange friend, where we would speak in Spanish half the time and English the other half. 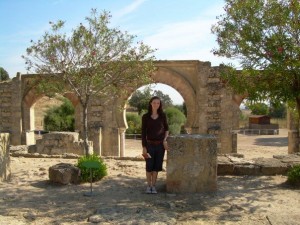 A word of caution for those who want to achieve Spanish fluency: especially when you are around other American students studying abroad, you have to make a conscious effort to keep Spanish the main language of communication. I did not go to any extremes with it, but I did make an effort to spend time with friends who were open to speaking Spanish together. And so, at the end of my year in Spain, I was interning in a Spanish office, going to classes in Spanish, and feeling altogether rather confident in my ability to communicate well to just about anyone. Beware – elderly Spaniards mumble terribly!

My other goals of experiencing the culture was really a matter of enthusiasm. I was eager to meet new people, find out their story over an interesting tapa, or a cup of café con leche on a plaza. Spaniards have a great respect for their friends and conversations, so I just tried to incorporate myself into that tradition.

In terms of the history of art and architecture, you almost can’t help but see it all around you. Particularly in southern Spain, where the history of Islam and Christianity is displayed on cathedrals, palaces and city squares. I made a priority of visiting museums and researching the history of places before I visited, so I knew where I wanted to go and what I wanted to see.

What, to you, was the biggest highlight in coming to Madrid?

I had spent the fall in a smaller city in the south of Spain, Córdoba. After that, I was particularly excited to live in a city with a wider variety of activities, restaurants, theater, museums and people. Madrid is the capital of Spain, and an exciting place to be as a young person.

And the biggest challenge?

Filing papers or signing up for classes at the University. I went to Universidad Carlos III, which is twenty minutes outside of center city Madrid. Any school’s bureaucracy is difficult, but here I had to be especially vigilant. The school did try to explain the process, but since I was only there for one semester, I had to learn a whole new system very fast. And sometimes things get lost in translation.

During your time in Madrid, you hiked the last 111 km of the “Camino de Santiago.” What was this pilgrimage like?

It was a lot of fun, and incorporated many of my goals. The “Camino de Santiago” is a medieval pilgrimage route to the cathedral in Santiago de Compostela in northwest of Spain. Routes exist from Paris, Rome, Lisbon, etc., and have been used for hundreds of years. We hiked the final four days of the journey on the most traveled route, arriving in Santiago from the east. The path was flecked with yellow arrows on buildings, trees, stones, and sidewalks. Towns and cities have sprung up along this route from the business of pilgrims, so grocery stores, restaurants and hostels are always available to the passing pilgrim. We hiked all day, but were always met by a clean bed and warm meal. All in a couple of days, I was able to meet other pilgrims and local Spaniards, enjoy the lush countryside, see the architecture of churches and towns, try the local food, and, of course, work on my Spanish! I would recommend the Camino to anyone visiting Spain.

What advice can you give to prospective students studying abroad in Madrid?

Enjoy! This is a unique opportunity to live in another country, notvisit as a tourist. So build a life for yourself – set up cooking classes, find a Spaniard to do a language exchange, read the local paper, try new restaurants in new neighborhoods, go to the local markets, talk to your waiters, go to the park with a picnic, sit outside on a sunday with friends and a cup of coffee all afternoon, invite people over and make dinner, throw a cocktail party or go to the theater and museum. It can be lonely at times, but keep in mind that everyone is feeling this way. Invite another study abroad friend out to a new restaurant. Everyone goes at their own pace, but I cannot stress how quickly the time goes by. The study abroad experience will be what you make of it. If you are excited and willing to try new things, it will be exciting and filled with new things!