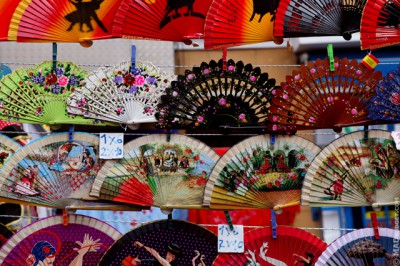 MADRID, SPAIN. “Aprovecha hoy, que mañana no estamos” shouts one of the vendors – “take advantage today, we won’t be here tomorrow.” It’s the Sunday atmosphere that makes this market special, week after week, year after year.

The origin of what is now known as El Rastro flea market dates back to the 14th century, when ropavejeros began selling used clothes here, near the Calle de los Estudios. Subsequently came the mataderos (butches) and the tenerías (tanneries), similarly establishing themselves in this neighborhood to sell their goods.

Time passed by and the Rastro has slowly morphed into what it is today: a flea market that draws crowds of locals and tourists alike on every Sunday.

The key to visiting the Rastro flea market is arriving early. Since parking spots are limited, your best bet is to take the subway to the La Latina metro stop. From here, you can walk in and out of the side streets of the Calle Ribera de Curtidores, the main street the market runs along. If you get there at 10 a.m., you’ll have plenty of time to browse around until 2 p.m., when some of the vendors will start taking down their stalls.

In fact, it’s likely you’ll need those four hours if you really want to see everything. Expect any and everything from antiques, furniture, clothing, sunglasses, military wear, and more. Though tradition has it that used and antique goods were sold here, today it’s the old and the new that reign. You’ll find Rolling Stones T-shirts, fake RayBan sunglasses and Real Madrid accessories, alongside vintage wedding dresses, time-old Spanish bestsellers as well as international movie posters. You’ll even hear parrots and sparrows chirping from Calle Fray Ceferino González – yes, animals are on sale, too.

And when you need some energy, take a bite at a caracol (snail) at Casa Amadeo Los Caracoles. Or if your tastebuds aren’t that adventurous just yet, an empanadilla at one of the corner buds will rejuvenate you, too.

Try it now and if you like what you see, come back next Sunday for more.

Starts at Plaza de Cascorro, down Calle Ribera de Curtidores, as well as side streets.