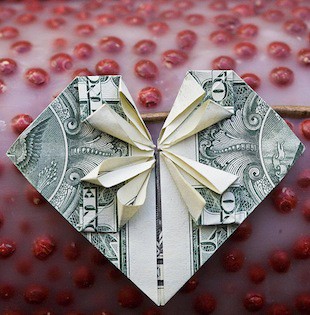 Love Does Cost a Thing

GLOBAL. Decades ago, the Beatles sang, “I don’t care too much for money, for money can’t buy me love.”

It seems they were wrong. Love is bought and sold in packs.

Flowers, expensive perfumes, cuddly teddies…the ways to show your affection are endeless. A movie (back row, corner seats). But not without a bag of popcorn, another expense. Or better yet, the strolls through the designer stores. She’ll make his day with an ingratiating smile, but only when he has shelled out for that hand-made silk scarf.

The best is Valentine’s Day. More stuffed animals, chocolates, cards, seven roses – one for each day of the week. Some offers are relatively normal: “Buy a cute handbag and get a rose for free.” But really, just about every establishment takes advantage: “Buy a burger and get a valentine card free.” A fallacy: you can score discounts, but in the end, you spend more.

Why can’t lovers just plainly say “I love you”?

Despite female emancipation, it’s usually the guy that has to cover all the costs.

“I love my boyfriend,” the girl will say. But why not speak the unspoken, “I love my handsome, tall, and RICH boyfriend. I actually love his wallet.”

Poor him! After a while, he might just contemplate being single again…

But the circumstances didn’t just roll around yesterday, though consumerism has without doubt exacerbated the situtation. Looking back on time-old childhood fairytales and romances, the heroes were always rich. Cinderella, a lonely poor girl who falls in love. To her delight, she discovers that he’s a wealthy prince in disguise.

From fairytale to fiction to popular movies, the male hero is so much more attractive if he arrives with money. It is not in vain then that Jane Austen opens Pride and Prejudice affirming that, “it is a truth universally acknowledged that a single man in possession of a good fortune must be in want of a wife.” And if he’s loaded, there will certainly be more than one girl in want of him.

Marriage is a flourishing industry, a business based upon mercenary greed. From the choice of the groom to the invitation cards, money makes the wedding go round. In India, my home country, reality TV shows mirror the ostentatious behavior, and entertainers like Rahul Mahajan ascend to fame for being the first to marry on Indian reality television for a national audience. The glitz and glamour says it all: weddings are palpable nexus between affluent people, a way to gain access to fortune.