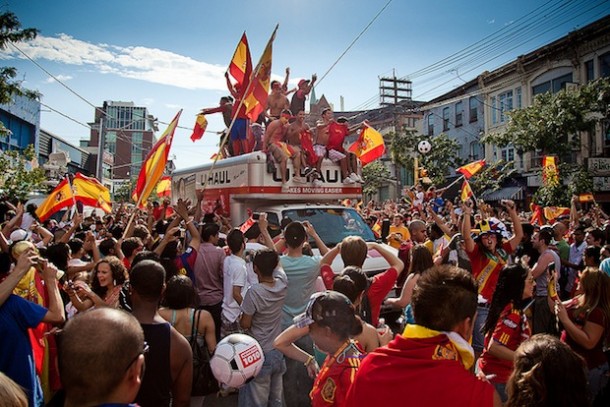 SPAIN. It is said that the first Olympic games were held in Athens in 776 BC to entertain the newborn Zeus. But more than a religious festival, the games were a sign of the prospering Ancient Greek society. Soon, their political purpose became evident; the sports competitions allowed city-states to assert their dominance over rivals. Whoever won was considered a leader not only in the athletic realm, but also in the political and economic reality.

Today’s sports events continue to retain a ritualistic aspect, uniting fans and players. Competitions at an international level can generate a patriotic spirit that is otherwise unparalleled.

And now more than ever, money and politics make sports go round. Companies sponsor the national teams; the government puts in place the necessary infrastructure. Rare exceptions pop up, but by and large, whoever has the bigger budget can buy the better players and attract the better trainers. Victories continue to be a reflection of an economically prospering and politically powerful society. But triumphs can easily crumble to losses as a direct effect of a financial and governmental crisis.

In Spain, as in many other countries, athletic achievements have mirrored economic development. Over the last decades, real estate boomed, and so did the soccer team. Tourism generated millions in income, the tennis superstars kept winning.

In fact, when the crisis broke out, the sports teams were continually cited as Spain’s sole triumphant aspect. “Have we mentioned we’re the European football champions?” asks a Grant Thornton video that went viral earlier this year, presenting Spain as a land of opportunity.

Slowly but surely, however, the athletic sector is demonstrating it is not immune to the country’s economic turmoil; it is just one of the last to be hit. As budgets tighten, corporate sponsors are forced to withdraw their financial support. Sport events are an added expense that only a flourishing economy can afford.

In fact, for many years, the Spanish soccer clubs have enjoyed a special tax status, with authorities tolerating loose finances because the teams brought prestige to the country. This past month, the government confirmed that the soccer clubs’ global debt has amounted to 663 million Euros, in addition to 16.6 million Euros in missed social security contributions.

When the rest of the population is suffering from austerity measures and unemployment, making exceptions for Messi and his fellow players hardly seems reasonable anymore. Pressure from German taxpayers, appalled by the fact that their bail-out money is subsidizing Spanish soccer teams, has already increased. And promptly, the Spanish soccer team lost 3-0 against Brazil in this year’s Confederations Cup.

The results of fewer funds follow in other disciplines, too: in 2012, Rafa Nadal lost in the first round at Wimbledon to 100th-ranked Belgian player Steve Darcis. Fernando Alonso no longer reaches the podium in Formula 1. At the Tour de France, Alberto Contador has to give way to Christopher Froome.

The only Spanish teams still up and winning are those of the motorcycle racing Grand Prix, precisely because sponsors have kept pumping in the money. Behind the entire MotoGP stands Dorna Sports S.L., a profitable Spanish sports management company that has held the event’s exclusive commercial and television rights since 1992. Thanks to the organizational structure provided by Dorna and the rest of the sponsors, motorcycling talents are fostered early on. And if one qualified athlete moves up or retires, another emerging prodigy can take over seamlessly.

But generally speaking, in Spain, the baton isn’t passed on and team spirit remains far from being fostered, in sports and in business. Santana and Nadal excelling as individuals is a direct reflection of the country’s economic structure. Banco Santander, Inditex – single companies succeed and become the first worldwide. Across the board, however, incentives for creating a potent national economy, and specifically, nurturing entrepreneurship, are lacking. “Cada uno a lo suyo,” everyone literally minds, and has to mind, their own business.

In Ancient Greece, the Olympic games were discontinued because the people had strayed from the gods, causing a plague and incessant war. With the end of the epidemic and the restoration of peace came also the reinstating of the games.

Right now, Spain is in dire need of purifying its image; not only of its debt-ridden soccer team, but of the country as a whole. Once a nation’s economy and government are stable, triumphant sports teams are only an added attest to its success.