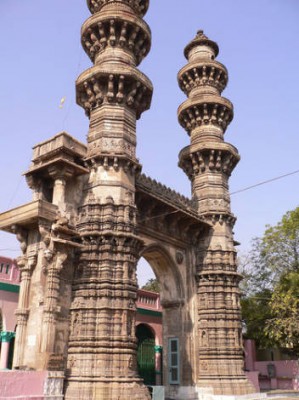 The Shaking Minarets of Sidi Bashir: an Unsolved Mystery

AHMEDABAD, INDIA. In the Sarangpur area of the city of Ahmedabad lies the Sidi Bashir Mosque, also known as “The Shaking Minarets.”

There are many possible stories behind who might have built the mosque; while some say it was Sidi Bashir, a slave of sultan Ahmed Shah, others give credit to Malik Sarang, a noble in the court of Muhammed Begada, another Sultan of Gujarat. In either case, the construction of the mosque was completed in 1452.

What makes the mosque particularly special is that if any person applies a little force or a gentle push on its upper arc, the minaret tends to sway. This phenomenon was first observed by Monsier M. Williams, a 19th century English Sanskrit scholar.

In the quest of getting to the bottom of this mechanism, another Englishman even tried to demolish one of the minarets.

But all his efforts were in vain; there is still a certain mystery surrounding why and how the minarets can sway back and forth. In fact, local engineering students have used the mosque as a case study to investigate the flexibility of construction materials.

Despite its ability to sway back and forth, this mosque perfectly withstands the pressure of trains passing through at one of the city’s main railway stations nearby. It also proved resistant to the 2001 earthquake, which shook the district of Gujarat with a 7.6-7.7 rating on the Richter scale.

In 1981, an electrical failure struck Qutub Minar, the tallest minaret in India. A stampede occurred and 45 people were killed. Ever since, the entry to minarets, and specifically, the possibility to climb to the top of the tower, has been prohibited. The Archeological Survey of India has sealed the entries and one can visit the minaret only with special permission.

But even if you can’t climb to the top of the tower, the mosque itself is still worth visiting.