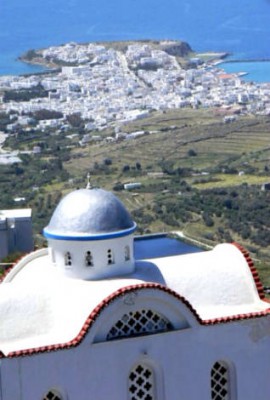 The Cyclades, More Than Santorini

THE CYCLADES, GREECE. The most celebrated island in the Cyclades must be Santorini, closely followed by Mykonos. This is where the photos of white-washed, Greek houses glowing in the Mediterranean sunset circulating all over the Internet were most likely taken according to their caption. However, few seem to know that the Cyclades are compromised of over 200 other islands and islets. Here’s why you should give those a chance.

Travel to multiple islands is relatively easy from the port of Athens by ferry. The ferries could be described as a mini-cruise ship with a bar, snacks and easy enjoyment of the Aegean Sea. The ferries run frequently and make multiple stops at different islands; therefore it’s simple to pick and choose which ones you would like to go to.

Many of the islands are known for one main “specialty.” For example, Mykonos is known for having many tourists and great night life. Tinos is known as the religious island. According to the islands’ tourism website, it is the religious capital of Greece and many Greeks travel there to make their pilgrimage to the Church of the Blessed Virgin Mary. 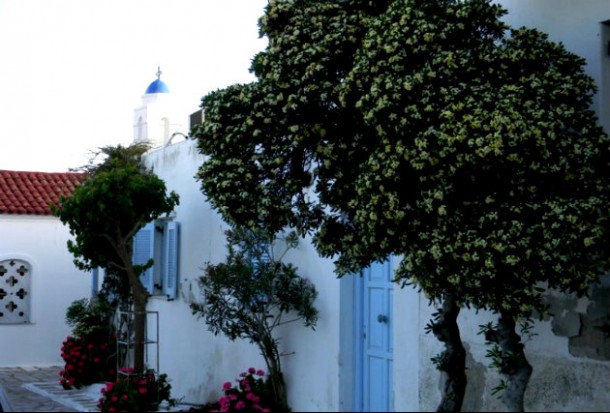 Side-view of a chapel in Tinos, Greece 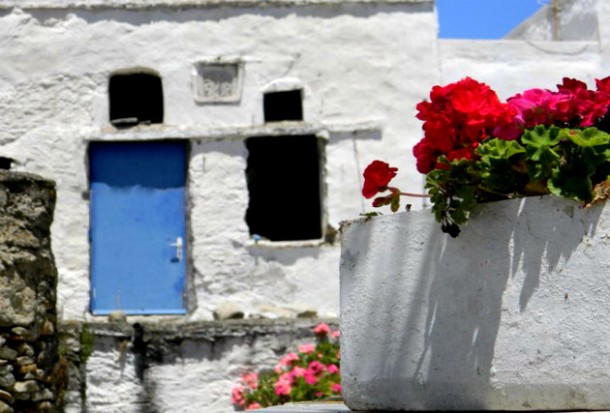 A traditional home in Tinos, Greece

One of my most memorable moments in my trip to Greece was a day-long tour throughout Tinos. We stopped at important churches and came across people going about their daily lives, such as a woman washing clothes in one of the fresh water washing houses. It was really special. The homes are decorated in the traditional white and blue, to represent the colors of the Greek flag.

Visits to islands like Tinos will give you a more authentic Greek experience. They are off the typical tourist route, and English is not widely spoken. Greek is very difficult to learn quickly. This may be a drawback for some travelers, but if you are looking for a real, Greek day in the life–the less “touristy” islands are the way to go. I highly recommend a tour guide who can tell you the interesting stories behind major sites!

The other island I was fortunate enough to visit was Delos. Delos is famous as the birthplace of two of the most known gods in Greek mythology, Apollo and Artemis. Their mother, Leto, was hated by Hera for being with Zeus, so she forbade any place in Greece to allow Leto to give birth to her twins there. Delos was the only place willing. You can read more about their story here. Mythology intertwined into each place was what made Greece so magical for me.

Delos was once the most important island in Greece, but is now uninhabited and covered in ruins. Yet people still make the trip to view the Greek and Roman influence firsthand, and marvel at the structures that have stood for thousands of years. One memory that sticks out to me is seeing just the remaining hand of a statue of Apollo. Since the hand alone was bigger than my torso, it was powerful to imagine the entire statue standing. 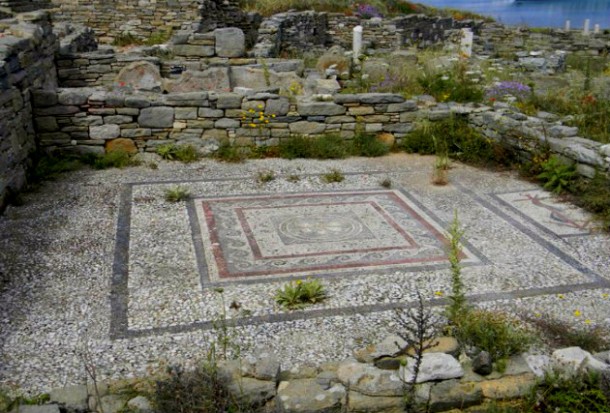 Ruins of a tile floor within a Roman home in Delos, Greece

To avoid tourist traps or overcrowded cities in the summer, do some extra research on what the other islands of the Cyclades can offer visitors. Whether you are looking for grand mythology, authentic Greek food, or pristine sand beaches, there is an island where it can be found. This information is essential in planning a trip that most caters to your personal preferences, and guarantees you an experience to remember. I would give anything to go back!