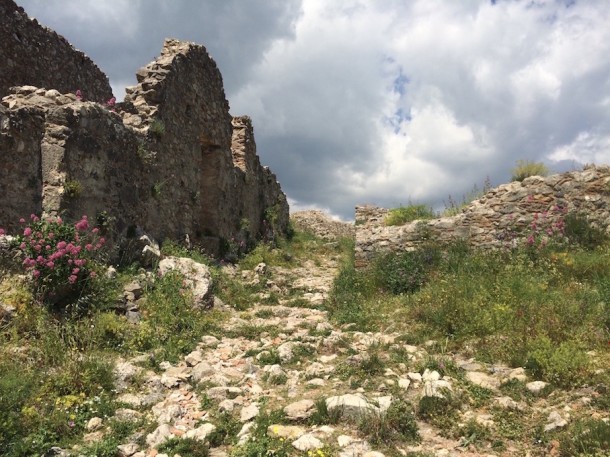 Athens and Sparta are almost synonymous with popular conceptions of Greece. Images of the cradle of democracy and the den of mighty warriors have permeated our society from textbooks to the silver screen. But now that we are over two millennia away from the Golden Age of Greece, what can the modern day cities of Athens and Sparta offer travelers?

Athens’ monuments are well known. The current Greek capital has a wealth of ancient temples, a horde of archaeological finds, and sites such as the old agora, or marketplace. And of course it boasts the Parthenon, albeit a little worse for wear after a Venetian army exploded a Turkish gunpowder magazine in the temple in 1687. Thousands of tourists flock to the city each year.

But what about Sparta?

After the Spartans were defeated in 371 BC by the city of Thebes, the helots, or slaves, that served them revolted, hastening Sparta’s decline. Although Sparta limped on for a few more centuries, by the Middle Ages they had lost even any regional power.

And unlike Athens, whose power was built on its wealth and led to the construction of monumental structures, Sparta’s main claim to fame was its military. Thucydides noted that due to the lack of costly temples and buildings it would be surprising if anyone in the future could believe that Sparta was as powerful as it was back then, while for the exact opposite reason Athens would be considered even more powerful than it actually was. Without even a wall to mark its former location, Sparta simply does not have the same degree of fantastic archaeological finds that Athens does, although there is the Archaeological Museum of Sparta.

And modern Sparta is just a recent creation, re-founded by Greece’s first king, Otto, in 1834. For the previous several centuries the regional center was about seven kilometers to the west, in the city of Mystras. It was a capital, a center of learning, and a bastion of medieval Greece. Perched high above the Laconian plain, the city of Mystras, now a UNESCO World Heritage Site, lies practically unknown to the world, but it is the true crown jewel of this part of Greece.

Mystras was a provincial capital of the Byzantine Empire from the 13th to the 15th century. At this time the Byzantines, centered in Constantinople, roughly had two portions of their empire: the lands around Constantinople and a section of the Peloponnese, the southernmost portion of mainland Greece.

Mystras, as the center of this latter region, was effectively a capital in of itself. Its leaders, known as despots (no connotation with despotism), held substantial power over the Peloponnese. In fact, especially as Constantinople fell into further decline, Mystras became a serious center of Byzantine culture and learning, attracting such scholars as Gemistos Plethon. The last Byzantine emperor, Constantine XI Palaiologos, served as despot before becoming emperor and was actually crowned emperor in one of Mystras’ churches, which you can still visit today.

Mystras also attracted notable architects, who built many of the buildings you can still see today. It was basically abandoned in 1834 when Otto re-founded Sparta, so much of the city appears as it would have centuries ago.

A trip to Mystras is a walk back through time to medieval Greece. The city itself is almost entirely built on a mountain, so it is a good idea to start from the very top with the Frankish crusader fortress that was built in the early 13th century. The winding cobblestone and dirt paths take you through medieval stone archways to see churches, monasteries, and even the despots’ palace. There are seemingly endless forks in the road, so there are plenty of options to choose the way that you went to explore Mystras. Near the bottom of the city is the small but informative and well put together Archaeological Museum.

At the base of the mountain is a quaint village, also known as Mystras, with a few tavernas and stores for a quick bite to eat or a souvenir. The area surrounding Mystras is also an excellent spot for hiking, with trails into the mountains and fantastic views of the surrounding plains. From Mystras itself you can see for miles in every direction, looking down to see olive groves and small villages while sitting on wall that was first put there hundreds of years ago. The easiest way to get to Mystras from Athens is to take a bus to Sparta, which takes about three hours. Once in Sparta you can visit the Archaeological Museum there before taking a quick ten minute taxi ride out to Mystras.

And because Mystras is such a relatively unknown site, it doesn’t face the same large numbers of tourists that frequent the Athenian Acropolis or the popular Greek islands such as Santorini and Mykonos. While Sparta may not have the same depth of old monuments that its famous name implies, Mystras more than makes up for the archaeological wonders of the region. The vast majority of tourists only see Athens and the most popular Greek islands, but there is a wealth of culture and adventure outside of that common itinerary. Make your trip unique – the back streets and untraveled places are what makes a trip rich and rewarding, what makes it yours. Mystras, the jewel of the Peloponnese, is a perfect example of a rewarding little known wonder.