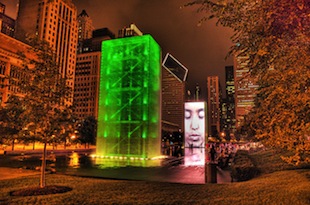 LEXINGTON, KENTUCKY, U.S.A. A funny thing happened on my way to 2014, repeatedly.

Last year I chatted with a Russian waiting for Godot; learned that Jesuits framed Confucius; pondered “where” I was wearing; saw young voters go big for Big Mike; discovered The Doctor; and heard a distinguished journalist use the word “Videolicious.”

I saw so much new light at the end of my tunnel vision that I’ve made a New Year’s resolution: Take everything I know and think again.

I once thought American journalists had little in common with Russians. Then I met the granddaddy of journalism school deans at Lomonosov Moscow State University. Yassen Zassoursky started as dean in 1965 as Nikita Khrushchev faded from power.

Zassoursky, now the journalism faculty’s president, is still waiting for Russia to create a great independent newspaper to find balance in informing the people. He told me Russian journalists have gone from reporting government propaganda to dispensing “commercial propaganda.”

I once thought I knew Confucius. Then a keynote speaker, On-cho Ng, at a Confucius Institute forum at the University of Kentucky blew my mind with blasts from Jack Goody’s classic, “The Theft of History.”

Turns out that 16th century Jesuits may have manufactured a theology called Confucianism from what were beliefs by China’s elite scholars. Jesuits made Confucius the founder, turned his notion of heaven into monotheism and saw Christianity in his version of the Golden Rule.

Reminds me of how Kentucky’s history gets stolen by outsiders who think they see reality, only they are blinded by their own beliefs. Stay tuned for national coverage of Kentucky in the 2014 U.S. Senate race.

I used to focus on what I was wearing until I met author Kelsey Timmerman, whose book “Where Am I Wearing” prompted me to wonder what peasant working in what sweatshop on what continent actually made my T-shirt.

On politics my head turned when 42 percent of my Journalism 101 students voted for “Big Mike” Johnson, the Republican Party candidate, in a mock election for state Senate. Johnson, a minister, received 11 percent of the vote in the Dec. 10 special election won by attorney Reggie Thomas, the Democrat Party candidate.

Asked why they went big for Big Mike, the students said the power of personality sways young voters as well as character. Being a minister mattered.

Going even younger, my daughter turned me on last year to “Doctor Who,” the world’s longest-running sci-fi TV show and the only program I can watch with a 14-year-old girl and not cringe.

As wholesome TV shows go, the BBC launched “Doctor Who” in 1963 when I was watching “Lassie,” and if you think a lot of different dogs went into making “Lassie,” you should see the 12 actors who have played The Doctor.

Makes me wonder what else I’ve missed over the last half century. That’s not funny.

I vow that my cerebral cortex will no longer be frozen by the polar vortex of tunnel vision, and I will tell my story of renewal using an iPhone video-editing app. May your 2014 be Videolicious, too.

A version of this article was first published by the Salem Statesman Journal in Salem, Oregon, on Jan. 10, 2014