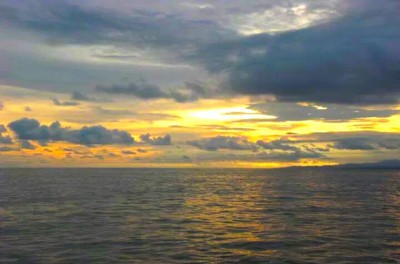 MANUEL ANTONIO, COSTA RICA. The trip to Manuel Antonio from San Jose was a part of the study abroad trip through my University, included in the cost of the program. Manuel Antonio National Park is located on the Pacific Coast of Costa Rica. 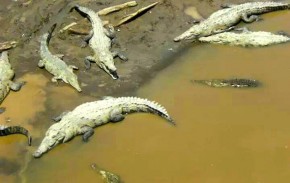 Depending on how many there is in your group, you can take a van but the more affordable route would be to take a bus. These buses leave from the Coca-Cola terminal -yes, like the soda-, which is the main bus terminal. You can find more information about tickets and times here. The trip lasts about 3 ½ to 4 hours. When we were about halfway to Manuel Antonio, we stopped in this area that had a gift shop and across the street there was another building that had souvenirs and food. It was in the middle of nowhere, but nearby was a bridge where from we saw lots of Costa Rica’s famous river natives: crocodiles.

After this break, we headed to Manuel Antonio in Quepos, to the Hotel Plaza Yara where we were staying. This hotel was very nice and was affordable. Rates range from $80-$120 USD depending on the time of year you are going. Each room was set up differently, but in general they had 2 beds, a lovely bathroom and shower, a kitchen, a little living room area, cable TV and a balcony. This hotel also has a pool and even an art gallery connected to it where they have jewelry, amazing paintings, bags and more! There is also a restaurant called Salt connected to the hotel that has seafood and gourmet dishes. In addition to this restaurant, there are also other restaurants nearby that have all types of different foods.

The beach was about a 5-minute drive from the hotel. The entrance fee per person is 6 dollars but it’s free for children. Also note that Manuel Antonio only offers a limited number of visitors on weekdays (600 people) and on weekends and holidays (800 people). After entering, there is actually a 15-20 minute hike to get to the beach. Along the hike there is of course beautiful scenery as well as an alternative route you can take to see more of it. After arriving at the beach you will be amazed; it’s as if you were entering another world. The white sand is lined with beautiful greenery, plants and trees. The beach also has a huge rock formation visible from shore. This is where a lot of people swim to and even dive off of. This is a great place to surf in you are interested in that. Keep in mind that although Manuel Antonio is a beautiful place, it is still very hot. I wore sunscreen and a huge hat, both in and out of the water, and I still got a beautiful tan. Be sure to carry sunscreen and drink plenty of water. 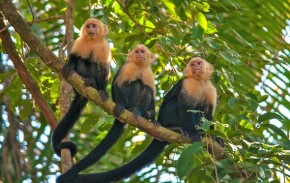 They may be cute, but watch out for these little pick-pockets

Overall the flora and fauna are amazing here. Manuel Antonio is home to many of Costa Rica’s endangered species, and you don’t have to travel far to see it. While there I saw the two-toed sloth -from my balcony!- However, a word of warning: nearby, there are white faced (Capuchin monkeys) and squirrel monkeys who have sticky fingers -meaning they like to steal things-. My friend that went had a monkey steal his things and he had to chase after him and climb up a tree just to get his stuff back. So, when in this area if you leave anything by a tree, keep an eye on it.

Apart from the beach, there is a lot more to do. We also took a Trimaran Sunset Tour, which was a lot of fun. The tour cost around $75 per person and was about 6 hours. It left from Quepos and went to Manuel Antonio and back again. When you first board the two-story yacht, they have music playing, and snacks and fruit laid-out. There is also a bar where you can order up to 16 drinks: 8 alcoholic beverages and 8 non-alcoholic beverages.

On the boat, the first level had the bar area as well as extra seating, a dance floor, a trampoline and a hot tub. The upper level is similar but it has lounging chairs and also an open area. During the tour we saw dolphins and even stopped for snorkeling and swimming. At this point, the upper level is used for people to jump off of into the water. After this, the tour continues while a late lunch is served. This included fish, rice, salad, chips and salsa, vegetables along with drinks. Soon after, the sun began to set and the view was absolutely amazing.

I would definitely recommend going to Manuel Antonio for a day or two. It’s a sight to see. ¡Pura vida!