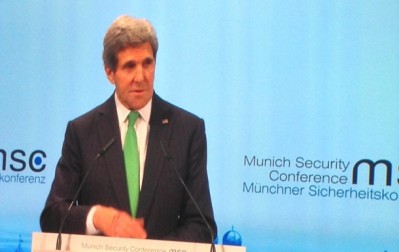 We Need a Transatlantic Renaissance

Kerry, as other speakers have done as well, opened his speech looking back on his own youth in the early 1950’s. George Marshall’s courageous vision, according to Kerry, constituted more than the physical reconstruction of buildings; it was “the rebuilding of an idea.”

Echoing Joachim Gauck’s and Ursula von der Leyen’s assertions that Germany must not remain indifferent, Kerry outlined that in today’s world, “all of us must think harder and act more.”

Hagel specifically welcomed von der Leyen’s proposal, put forth as the introduction to yesterday’s panel on European defense, to increase Germany’s participation in foreign affairs. In doing so, Hagel mirrored Kerry’s remark that, “turning inward is not an option for any of us.”

In the current society, where young people are desperate for jobs and education, said Kerry, governments cannot retreat and must do more than just recover. “Shared commitment and shared investment” must continue, so Hagel. America’s commitment to Europe continues to be unwavering, said Hagel.

Climate change, the Syrian conflict, Israel vs. Palestine; the agony lies in the fact that all of these issues have solutions, argued Kerry. He also sees a current absence of will in political leades, but “failure is not an option.”

According to Kerry, the United States is the first to admit that its democracy is always a work in progress. “We come to this conversation with humility,” he said.

The important work to be done comes after meetings such as the Munich Security Conference, in the allocation of resources, for example.

Kerry agreed with U.S. Secretary of Defense Chuck Hagel that the Munich Security Conference is a reflection of the successful partnership between the U.S. and Europe. “The challenge is in living up to the legacy of this transatlantic partnership,” Kerry concluded.