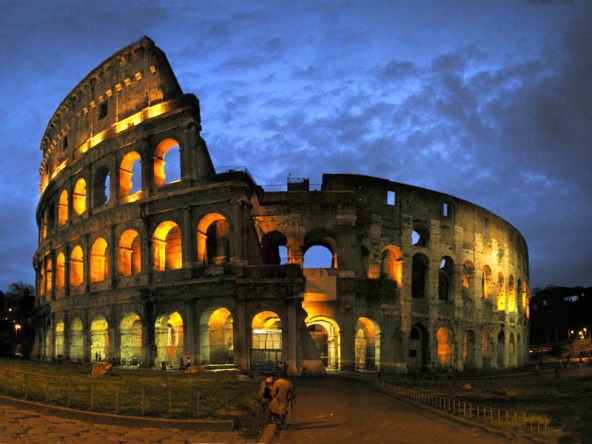 ROME, ITALY. Arguably the Italian capital’s most iconic building, and a structure immediately recognised the world over, the Colosseum is astounding to behold. The almost infinite arches and the aesthetically pleasing combination of curved and straight lines evoke at first glance social and historical connotations and imaginings that date back over 2000 years.

Unfortunately time has taken its toll, and due to its age it takes a vivid imagination to reconstruct mentally the place; all that remains are the monstrous walls and some of the interior structure, which bore witness to gruesome gladiator fights, a flooded arena for mock sea battles, wild jungle environments recreated wherein savage animals would roam and hunt down undesirable prisoners, along with a whole host of other spectacles and entertainment. A partial arena floor covered in sand, which at the time would soak up the puddles of blood that would gush along the ground, has been rebuilt to help visitors visualise these events of the past.

Yet the question remains whether or not this attraction merits the lengthy queuing and paying to enter. 12€ or 7€ for EU concessions is not outrageous, especially considering the ticket includes entrance to the Roman Forum and Palatine Hill. The two hour queue is, however, worth avoiding. The best advice would be to buy your entrance ticket at the Roman Forum, where queues are significantly shorter, thus enabling you to bypass the worst of the lines and follow the footsteps of the many gladiators who entered the walls of the Flavian Amphitheatre.

Once inside, the visit starts with a climb up two huge stairways, in the footsteps of thousands of Roman spectators, which take you to the middle level where a number of artefacts, information boards and then a view of the centre stage await. When you have posed for countless photos, squeezing between the hordes of other tourists admiring the eroded stairs, passages and seating areas, you descend a level for a different perspective of the arena. After another handful of snaps, the tour is over and it is back to 21st century Rome, unless you follow up this visit with a walk around the Roman Forum. All that is left is the small matter of fighting off the cohort of Roman soldiers and souvenir sellers who patrol the monument, pouncing on the unsuspecting tourist.

So was it worth it? Well, the panoramas which are not too blurred or obscured by heads and other cameras do look good. However, there is a distinct feeling of disappointment on exiting, which certainly would never have been the case in Ancient times when satisfied spectators emptied out of the stands after eight hours of drama and tension, guts, gore and gambling. From what little remains of the Roman amphitheatre, it is a challenge to even those with the most wild and creative imaginations to picture how the arena would have resembled during its heyday.

Without a guide to put the atmosphere into your visit, filling up the empty stands with their personal mixture of knowledge and anecdotes, the tour seems a little underwhelming, which certainly should not be so when visiting a UNESCO World Heritage Site of this magnitude. Yet, when a guided tour starts at €25 per person, it is a steep price to pay for information that could be discovered in books or online.

Rome’s Colosseum is not to be missed: an outstandingly beautiful edifice in one of Europe’s most attractive cities. Why not contemplate the stunning exterior and then decide for yourself if it is worth crossing the threshold and stepping back almost two millennia in time.