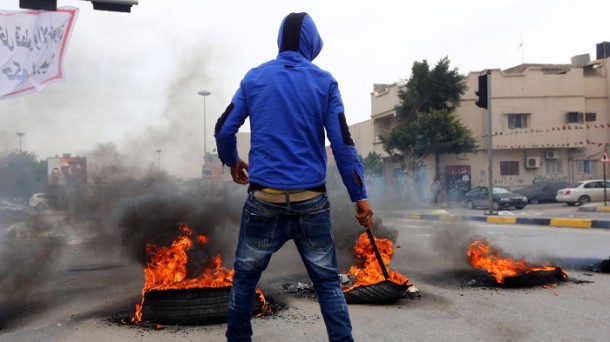 ‘A Tale of Two Parliaments’: The Libyan Deadlock

In the seemingly endless maelstrom of notably severe headlines emanating from North Africa and the Near East of late, one would nearly be forgiven for not keeping a closer eye on the trouble brewing in post-revolutionary Libya. Staggering to define itself after decades of dictatorship, like a rag doll it’s being torn apart by feuding militias, renegade generals & foreign meddling. Libya has gone from simmer to boil and now poses not just a threat to its self but to its neighbors and regional partners too.

All too often, the wresting for control of Libya is reduced to a fight between Islamist brigades and a liberal nationalist movement. The former, temporarily donning the robes of democracy until the vote goes against them and the latter, a beacon of realism and rationale to a war weary west. In reality the deadlock is much more complicated, with tribal and regional alliances setting the stage upon which the Islamist vs. Non-Islamist narrative is played out.

Traditionally Libya has been a loose collection of provinces, poked and prodded into the form of a unified nation state, with Libyans identifying with the city they are from rather than the country itself. In the 2011 revolution that saw the removal of Muammar Qaddafi, the powerful regional and tribal alliances of the Misratis and Zintani were united in the task of ousting their shared oppressor but have since drifted apart causing a violent stalemate that runs along ancient lines and threatens the breakup of the country.

The large coastal city of Misratah in the West constitutes what is referred to as the ‘lower’ tribal alliance. This is comprised of Misrati militia men and those of the smaller towns close to its borders. A strong and well-armed group with close ties to the Muslim brotherhood, the Misrati claim to be battling what they describe as a ‘counter revolution’ coordinated by ex- Qaddafi regime members. This umbrella group is often referred to as the Islamist movement ‘Libya Dawn’

The Zintan in the south, however, are part of the mountainous or ‘upper’ alliance. More liberal in its views, the Zintan fill their ranks with Bedouin tribes such as the Warfala, Warshafana, Gadhadhfa and Maqarha. The Zintan also have ties to Libyan General Khalifa Hafter, a renegade who has decided to set out upon a self-declared mission ‘Operation Dignity’ to eliminate Islamist forces throughout the country.

When the Misrati aligned itself with the Muslim Brotherhood affiliated Libyan Dawn post 2011 and the Zintan sided with General Haftar and the Liberal National Forces alliance (NFA) their relationship became unfeasible.

The groups clashed in various parts of the country over the past number of months, most notably in Benghazi and Tripoli where a brutal battle for the cities international airport raged throughout the summer. The combat was decided upon when Libyan Dawn forces gained the upper hand 26th of August causing the Zintani, who had controlled the airport since 2011, to retreat. In the fighting, millions of dollars’ worth of damage was caused to the airport and a total of eleven commercial airliners have gone missing, prompting fears of a 9/11 style attacks across North Africa. This all comes as a huge blow to the Zintan and their plans for tribal economic security and dominance in the area.

A TALE OF TWO PARLIMENTS

Libya’s parliamentary elections in June resulted with the Islamists faring poorly. After gaining control of Tripoli and its airport, Libyan Dawn brazenly de-legitimized the new parliament by reconvening and backing the old parliament which subsequently voted in a new prime minister. All of this has been taken place as the internationally recognized government is forced to meet in exile, 1,000 miles away, under the protection of General Haftar in the eastern city of Tobrok.  Tripoli and Benghazi, have simply become too dangerous for the newly elected parliamentary members and their supporters.

It’s not just civil disturbances Libya is facing. Regional states such as the UAE and Qatar have allegedly used the conflict to extend their proxy war, both sides supporting and destroying political Islam respectively. In the past month, three separate reports of a mystery air strikes targeting Islamist Libyan Dawn positions. At least one of which Washington confirmed to be carried out by UAE aircraft flown by Egyptian pilots. These comments were made only to backtracked on shortly thereafter. The Qataris too have had the finger pointed at them for sending heavy arms to the Libyan Dawn group in Tripoli in the days after their seizure of the airport.

The Egyptian government in particular is fearful of the conflict spilling over the vast and porous border it shares with Libya. Egyptian president Abdel Fattah El-Sisi voiced these concerns to the U.S. vice president John Kerry during a meeting earlier in the week on the establishment of an international effort to combat the Islamic State. It comes as no surprise that the General who violently expelled Egypt’s elected Muslim brotherhood government doesn’t wish to see political Islam flourish so close to home. President Sisi requested that international efforts to tackle radical Islam should not be limited to the Islamic State, but extend to other organizations, particularly those of North Africa.

With the multitude of coinciding disasters unfolding, meaningful attention from the international community has scarcely been harder for struggling states to attain than now. But when the attention does come it may be too late to save the breakup of North Africa’s second largest country.