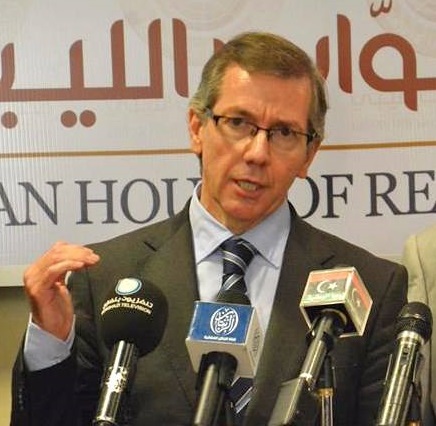 Towards a Peaceful, Diplomatic Solution in Libya?

After months of diplomatic efforts, the UN Special Representative and Head of the United Nations Support Mission in Libya, Bernardino León, announced on October 8, 2015 that an agreement had been reached in Skhirat on the names for a Government of National Accord in Libya.

Two rival parliaments and governments have existed in Libya since 2014: one in Tobruk, east of Benghazi, and another in Tripoli. The House of Representatives (HoR) in Tobruk is the internationally recognized parliament while the General National Congress (GNC) in Tripoli is supported by Islamists and Misratan militias, but also by Turkey and Qatar.

The proposed Presidential Council would be made of six members, with their votes expected to have the same value in the first rounds of voting. It has been proposed that all of them rotate in the international representation role of Libya in order not to create political unfairness.

The prime minister proposed was Mr. Fayex Sarraj, a Tripoli-born engineer and member of the House of Representatives in Tobruk. Mr Amed Meitig from the west (a Misratan businessman), Fathi Meibari from the east (Minister of Education in the Tobruk government), and Musa Kuni from the south (member of the Tuareg community) were the three deputy prime ministers. Finally, Mr Omar Aswad from Zintan and Mohammed Ammari from Tripoli’s General national Council were named as senior ministers to complete the presidential council.

A list of candidate members of government has also been proposed, but Bernardino León remarked on Saturday that they are just “suggestions made by participants in the Libyan Political Dialogue”: “only the Presidential Council shall decide on whether or not to accept these suggestions”.

Now it is up to the House of Representatives in Tobruk and the Global National Council in Tripoli to vote on it, but it will not be an easy task since members of both of them have already expressed sharp criticism of the proposal.

On Libya after Qaddafi.