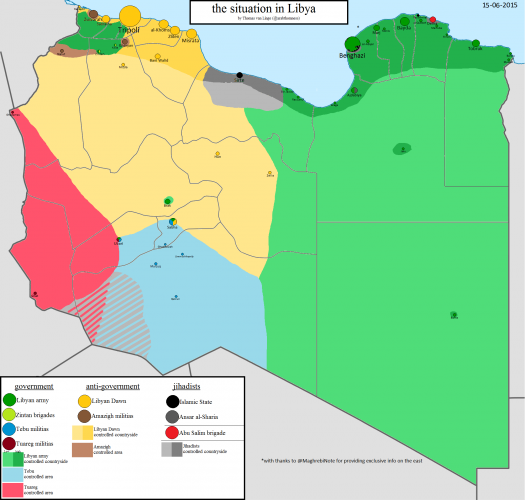 After months of negotiations mediated by the United Nations Support Mission (UNSMIL), there was much hope for a peaceful, diplomatic solution in Libya. Bernardino Leon, UN special representative for Libya, announced on Friday an agreement between the internationally recognized House of Representatives (HoR) in Tobruk and the General National Congress (GNC) in Tripoli.

A military escalation in Benghazi, however, is undermining the on-going diplomatic efforts. Fights resumed on Saturday 19 September after Khalifa Haftar, commander of the Libyan National Army of the government in Tobruk, launched Operation Doom against areas of the city still held by Islamists.

The rebel forces that overthrew Qaddafi were highly fragmented, and shortly after the war coalesced under military councils which took control of local security in many towns and regions.

Libya’s transitional authority, the National Transitional Council, and the elected General National Congress (GNC) who took power after it, had neither sufficient internal backing nor visible international support to successfully disarm the mushrooming militias; they tried to exert control over these groups by putting them on their payroll.

Zintani and Misratan militias, Islamist brigades, and federalist armed groups, however, have all used force to pressure elected institutions, seize oil facilities, and occupy airports and other strategic assets. Zintani and Misratans rival in the west; Jihadists assert their authority in Derna and Sirte, and a range of military units in Benghazi join retired Brigadier General Khalifa Haftar.

After building support among powerful tribal grouping in the east and receiving backing from Tabu and Tuareg in the south and Zintani in the east, Haftar’s Libyan National Army launched a large scale offensive in 2014 – Operation Dignity – to fight back Islamists armed groups; it also called on new elections after forcing GNC’s dissolution. The new elected House of Representatives had to flee Tripoli for Tobruk, east of Benghazi, when Tripoli’s Islamists and Misratan militias launched Operation Libya Dawn to seize the capital. Members of the former GNC who had rejected the elections have then voted themselves as legitimate National Congress.

Two rival parliaments and governments have thus existed in Libya since 2014, leading the country to another civil war. The airstrikes are a clear attempt to undermine and derail the on-going efforts to end the conflict – said the United Nations Support Mission in Libya – at a time when the negotiations have entered a final and most critical stage. The only solution must be within the framework of the on-going dialogue process and a political settlement that ensures inclusion, balance and consensus. The parties in Libya now have a historic opportunity to reach such an agreement that brings an end to the division and suffering and allows for a new to be turned in Libya.