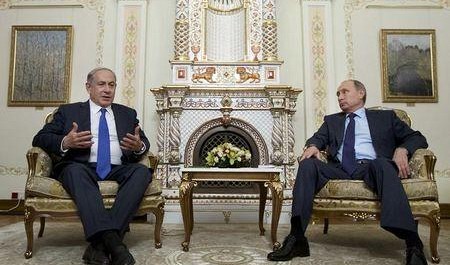 Benjamin Netanyahu Comes to Moscow – With His Two Generals

Israeli Prime Minister Benjamin Netanyahu arrived at Moscow today to speak personally with Russian President Vladimir Putin about the situation in his region. With the escalated presence of Russian military supporting Syrian president Bashar Assad, Mr. Netanyahu had every right to be concerned. The main reason for that is, undoubtedly, Mr. Assad’s co-operation with the anti-Israeli terrorist group Hezbollah. This explains the seriousness of Israel’s Prime Minister, accentuated by the fact that he took with him to the meeting the head of defence Lt Gen Gadi Eizenkot, and the head of military intelligence, Maj Gen Herzl Halevi who rarely leave Israel. Also, Israeli delegation was not accompanied by any of their home media representatives.

Inside Mr. Putin’s mansion, in a chair in which only few months ago rested Mr. Netanyahu’s deadly enemy Mahmoud Abbas, the former was listening to Mr. Putin’s New Year wishes. Little he replied to those, turning the conversation straight to the point of his arrival, a concern that the modern Russian weapons will land in the hands of violent anti-semitic terrorists the way Iran’s weapons did. He also expressed his worries about Iran’s presumed attempts to open a second terror front in Golan Heights. Vladimir Putin replied with a stifled laughter that Syrian army is too busy for this trying to maintain its own state. With regard to Hezbollah’s threat, he just said that Russia’s actions in the region will be “responsible”.

Meanwhile it became known that there already is a “Coordination Centre for Co-operation with Russian Military Forces”. According to the Israeli website Walla, it functions in order to prevent clashes between Russian and Israeli forces.The website’s source is telling that the matters of co-ordination were the ones that forced the Prime Minister to urgently arrive in the company of his two most important military men. After the talks, Mr. Netanyahu said that the mechanism of preventing the accidental trade of fire has been worked out.

Yesterday a video was uploaded on Youtube showing Russian drones hovering above Homs, Syria. The Russian officials admitted that they will be helping Assad’s army, but so far only indirectly. The possibility of an open conflict between Russian and Western forces on Syrian ground seem very unlikely. A good proof for that is the telephone conversation between Russian Defence Minister Sergey Shoigu and US Secretary of Defence Ashton Carter last Friday that have put a start for more of upcoming discussions about Syrian situation.