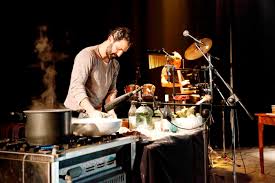 DonPasta, The Foodie DJ For Whom Cooking is a Political Act

Daniele de Michele, also known as Donpasta, is a dj, a gourmet and a performer. His “Artusi remix show” is against trends such as healthy food (a definition which is a nonsense in Italy, one of the birthplaces of the Mediterranean diet), local food (because it’s already within the italian tradition) and dishes aimed at showing off. All he wants is going back to what, according his own analysis, has gone lost just because of culinary fads: simplicity. “Italian cuisine is famous throughout the world because it is simply brilliant: we have a heritage of thousands of recipes created starting from only four ingredients, ” he claims. Then adds,

“Italian families still have a kind of cooking intelligence: over the week they rotate ingredients in a balanced way that is hard to find elsewhere. Yet what transpires from broadcasts, articles, culinary events, is an misuse of food. Cooking shows like MasterChef, take away our identity and our tradition of dishes which are simple, cheap and healty. We were proud of that,” he said. “but Master Chef tells you that that’s no good, that you need to do something cooler” . 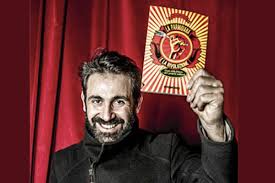 DonPasta thinks cooking to be a political act.

Don Pasta’s fame is linked to the name of Pellegrino Artusi, the author of an 1891 cookbook that was one of the firts ones in Italy. “Artusi was a kind of blogger of his century”, Donpasta explained to the magazine Panorama. “On behalf of the Artusi’s Foundation, we collected recipes from all over Italy; then we commented and analyzed them”. The result is both a book “Artusi Remix. Travel to the popular Italian cuisine”  and the above mentioned show (you can see one of his cooking dj set here .

The nickname Donpasta dates back to his “french years” when he was working in Paris a D.J (or according another version of the story, to his months as Erasmus students in Toulouse). After the shows, he would end up cooking pasta for the staff, whom named him Donpasta “because they said I was the Don Corleone of pasta,” he explained.

“For me, it was normal to play music and cook. I compared eggplant Parmesan to John Coltrane as a dish with a mix of flavors and complexities, improved through infinite improvisation”.

As the New York Times writes, at some point Mr. De Michele “realized he could use performance and food to ask the same questions he was exploring in his economic research: how to create development without industrialization, and how to preserve centuries-old customs in the face of globalization”. This is what he still does in his shows (like in this video), in which he claims cooking to be a political act.

He admires Carlo Petrini and the Slow Food Movement, that he funded in the 1980s, but his aims are different. He is not interested in being the arbiter of good taste, setting standards which everyone is restricting to: he wants to preserve the variety and liberty of Italian working-class culture. “Before Slow Food and Eataly there was the cuisine of my grandmother” he says. “Popular cuisine is a matter of pure genius and has to be protected as it has been helping us to live with dignity and to enjoy life in spite of unemployment, emigration, even of the wars”.

Are you fond of traditional recipes? Are you more into experimenting new dishes? Share your views by tweeting at @RoosterGNN or @bluelisa hashtag #Donpasta.