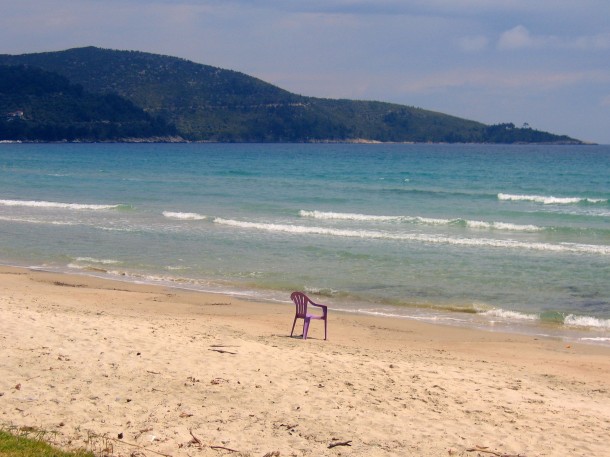 From the densely vegetated Ionian islands, to the glorious nakedness of the Aegean rocks, one cannot help but fall in love with the crystal clear waters and sun-soaked beaches along Greece’s coastline. It is this pride for the country’s natural resources, coupled with the fact that tourism is a vital source of revenue that led to thousands of citizens protesting against the government’s proposed coastline legislation. While only 10% of the Greek coastline is currently defined, and a reform would therefore simplify the process of delineation and aid the protection of public property in agreement with the requirements set by the troika, the Finance Ministry’s proposal included further plans, which seem to have aggravated the public.

The proposed measures include relaxing the existing limits on the commercialization of Greece’s shores and restricting the long-standing free public access to the country’s shoreline. Fearing the loss of a benefit they most definitely admire and regard as their right, and seeing the effect that Spain’s coastline legislation has had on its shore, thousands of Greeks seem determined to put an end to the governing coalition’s proposal. The government’s online site  (opengov.gr) gathered a record-high 1113 comments for the coastline legislation, compelling it to freeze its efforts until after the May 2014 European Union elections. Moreover, a Facebook page named “Stop the destruction of Greek Shores” has gathered 39,000 members, while an online petition against the reform has 154,000 signatures (see here).

Entering into its 6th year of recession, and experiencing the worse economic crisis after the Second World War, the country is craving for capital and investments. Yannis Stournaras (Finance Minister until June 2014) defended the view that the potential of the coastal zone is huge and should be used for economic development (as he told Reuters). Nevertheless, while the potential revenues from such a legislative reform will be great, one must for a moment evade thinking merely in terms of fast cash in the short-term. The Greek coastline must be delineated, if not for anything else to ensure a uniform building law and escape the longstanding practice of illegal buildings springing out of nowhere through bribes and clientelistic procedures. Yet, by uniformly allowing the private exploitation of the country’s natural treasure to secure an additional source of revenue in the present, the government may be unable to control the extent of the coastal zone’s development, risking its deformation, and acting with disrespect to the rights and privileges of Greece’s future generations.

Gazing at the view from a little room in the island of Patmos, one is mesmerized by the combination of green and blue, merging together free of the presence of cemented skyscrapers. Greece’s possibilities in the tourism industry are infinite, and the extension of its high season should definitely be a priority for the government. Yet one hopes that it will be able to combine investment plans with a conscientious plan regarding the conservation of its virgin natural resources.