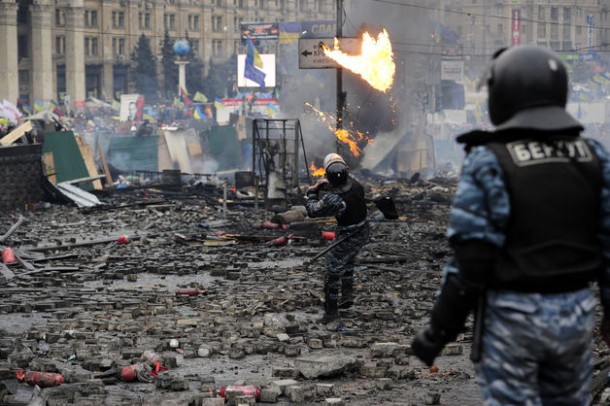 A Step Away from Being a Failed State

Revolution. Annexation. Rebellion. Out of all unstable economies in the world: Syria, Venezuela, Pakistan or Iraq, no one would have ever expected the revolution to occur in such quiet place as Ukraine. The fire sparked unexpectedly, and in a matter of months a stable growing economy found itself on the edge of a cliff one step away of officially becoming a failed state.

The story of Ukrainian conflict starts in November 2013, when President Vicktor Yanukovych who won the presidential elections in 2010, rejected proposed by European Union Trade agreement. On November 24th thousand of protesters gathered in the Ukrainian capital city of Kyiv to show their disagreement with President’s decision and demand that the government sign the proposed agreement. Yanukovych disregards people’s opinion and on December 17th officially chooses Russia over EU by signing Ukrainian-Russian action plan, which sparks another series of demonstrations with over 800,000 people rallying in Kyiv. Protests continue, getting more violent in February. On the 20th of February 2014 the government orders snipers to open fire on protesters, killing more than 100 people in 48 hours. Victor Yanukovych leaves Ukraine, later announcing his resign.

The government is taken over by Ukrainian nationalists, who search for new completely independent from Russia Ukraine. They abandon Russian as one of the two official languages of the country along with proposing more nationalist policies. This does not make Crimean residents, 77% of whom are Russian happy at all. On 16th of March 2014, 97% of Crimean people vote yes to join Russia. Two days later, Russian President Vladimir Putin, signs a law incorporating Crimea into Russia. Interesting fact about Crimea is that it happens to sit on the richest oil and gas source of Ukraine, which of course, was very convenient for Russia. International community, however, was not having it, and the United States along with the European Union slapped Russia with the first series of sanctions.

On May 25th, 2014, Petro Poroshenko is elected as a new president of Ukraine. Opposition continues its fight against new-elected Ukrainian government. At the same time Poroshenko signs the landmark deal with EU, originally rejected by ex president Yanukovych. Government vs. opposition fight continues, now affecting more than Ukrainian-Russian relations. On 17th of July 2014, Malaysia Airlines Flight MH17 is shot down in eastern Ukraine supposedly by pro-Russian opposition. 298 lives are lost. The reason why the plane was flying over such dangerous territories is still unknown.

The number of events that has occurred in Ukraine since then is enormous and will take up the whole page to just list. The fact stays the same; government vs. opposition conflict continues to take place, daily taking lives of innocent civilians. Russia supposedly was not out of the conflict with annexation of Crimea. In fact, Ukrainian government accuses Russia of providing Ukrainian opposition with weapons, which Putin, of course, denies. Ukrainian government, which has struggle fighting armed opposition asked United States for military support. The United States had its respond ready on March 23d, when the House of Representatives passed a resolution that urges President Obama to provide Ukrainian government with military assistance in its struggle against pro-Russian rebellion. Russian government, however, refers to it as to “direct call for war”.

What is going to happen next? Will the United States arm Ukrainian government? This fact stays unknown. What is known, in fact, is that for a year of opposition more than 6000 people have been killed, the rest live in constant fear for their lives and the economy is on the edge of total collapse.