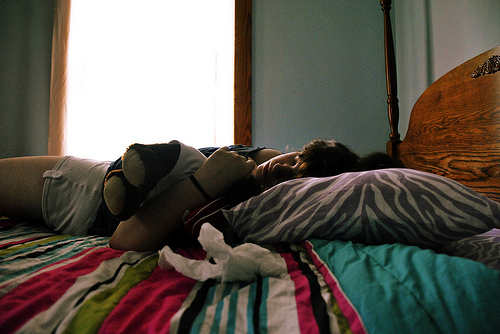 A Forum Discussion on Abortion

What follows is a resume of a forum discussion on a website for ethnic Moroccans in the Netherlands, Marokko.nl. The case to be discussed is set out in a letter by a young Dutch woman, who calls herself ‘sarah’. She is three and a half months pregnant, in spite of using the pill and reduced fertility as a result of an involuntary abortion the year before. Her friend is an ethnic Moroccan with whom she has a relation that by now has lasted five years. She told him immediately about her pregnancy. Although she was against it she tried to discuss abortion, but he was confused and evasive. And only now he wants her to abort. Sarah says that she “doesn’t want him to quarrel with his family,” but that after three months and a half it will hurt her too much. Her mother, who is seriously ill, wants her to have the child. She says she is unable to kill an innocent baby. Her letter ends – “Sorry for my long story, I hope you will give your responses without immediately condemning Dutch or Moroccans as we live here all together and (I) find must respect each other … thank you in advance for your help.”

Mieneer_kaktus (Mr Cactus) responds almosty instantaneously: – “I don’t need to read the whole story in order to advise you that you are a murderers if you do it… and him too”

HGNorthside: – “Couple of child murderers! All this because you weren’t able to suppress your libidinous desires! Shame on you!”

Nedurlandse says – “ Keep it, make your mother happy with a grandson or granddaughter, she is already very ill. Put your child on the first place, not your friend. If he doesn’t stay with you, that tells enough about him. I think you’ve got to go for it yourself.”

Nedurlandse explains that abortion is only regarded as homicide after one hundred and twenty days. After three forty-day periods the soul is blown into the body of a phoetus. Various scholars have permitted abortion in the first forty days, in case of health and mental problems or if the education of other children is at risk. In the third forty-day period only in case of grave anomalies abortion is allowed. After these hundred and twenty days it is forbidden in all cases. – “In conclusion I want to say that for someone who has voluntarily committed fornication it is not permitted to end her pregnancy, not even in the first fourty days, as Islamic exemption is not valid for sinners.”

After half an hour and two tumultuous web pages, Lovely-Soussia remarks: .. Very interesting, your responses, but if you read well she is going to commit NO ABORTION AT ALL. (..) She is only posting her story. (..) Girl, good luck with your pregnancy and raise your child with Islam.”

By now the tone has changed. Enraged responses keep coming in from people who have just read Sarah’s letter, but other voices wish her strength and good luck. Baby Selly says – “Girl, there will be many people here that are downright against abortion, well I’m not. I think there are circumstances in which you are surely allowed to do it. But in this situation I think you have waited too long and leaned too much on him.” On Sarah’s detractors, Baby Selly comments – “Some people have blinders on. They don’t understand another person’s situation and think they are holy. Labelling everything ‘haram’, that’s why three quarters of the Moroccon youth is going to the dogs. They only pay attention to limitations, not to possibilities.”

Upon another comforting comment, Sarah answers: ..It took 2 years before he loved me and had the courage to tell his family.. after another 2 years of rows and threats they still don’t really approve, but don’t talk about it either as they can see that I have (had) a good influence on him and treat his family with respect even as they hurt me.. And it took quite a lot of trouble to get this far as his family is a difficult one indeed.. when his uncle wanted to marry a Dutch woman his other uncle killed him with a knife. (..).. I’d rather have them hit me than my baby, but I do bother being forced to watch my back.”

Most of the voices now are trying to comfort Sarah, strengthen her in her decision to keep her child and denouncing her friend and his family. Now and then a detractor blaming her for not “having kept her legs closed” still stumbles in, but gets righteously scolded. Altogether only a small fraction of the participants blames her for having had sex before marriage. All, however, with the possible exception of Baby Selly, reject abortion, which is remarkable as proportionally more Moroccan girls and women are being registered in abortion clinics than Dutch (see e.g. Bloemenhove rapport and Gezondheidsnet ).

And these are the very last entries:

Ladydiamant: – “Hey girl, these people have not read your story at all and make judgements and call you names. You are absolutely no child murderer, you are 24 and sufficiently wise to raise your child. Also he (Sarah’s friend) will accept it after some time, because however you look at it, it is and remains also his child.“ -“Now he says that he will ruin me and take away my child,” responds Sarah, “but he also calls in tears, that he misses me and loves me and wants to marry me.. He is confused, but still I really hope that he will love his child and treat it well.”

– “You won’t be sorry,” says Ladydiamant, (..) – “ I really wish you all the best and please don’t mind those morons here, as half of those who react have not even read your story… They only read what they want to read… Good luck, girl. Kiss.”