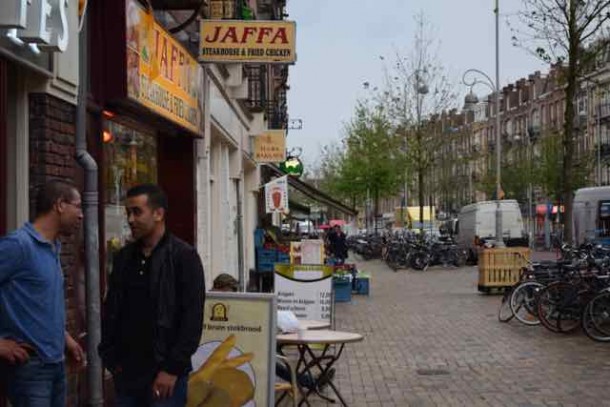 So Close and Yet So Far

For a tourist coming to the Netherlands for the first time this country may look like the realization of the utopian ‘melting pot’, a place in which people from different cultures, ethnicities and religions live joyously and peacefully side by side. You will see them waiting for a train, exchanging bitter comments on the national public transport services, standing next to each other with an enemy in common,  the railways. But if you move away from this idyllic image, move away from the city center  where tourists and residents are mingled together and into the peripheries where people actually live, this melting pot seems to fade away, giving space to different worlds, next to each other and at the same time ignoring each other’s reality.

It’s the reality of big cities where people of different ethnicities, religions  and cultures have formed their own little world inside the city. So in Amsterdam you will find the Moroccan area, the Turkish, African and the wealthy white Dutch people areas, all of them with their own cafes, restaurants, shops, butchers, schools, markets and, more importantly, peoples. We live in the same city and yet we live in different worlds.

One of these worlds is the Muslim world.

During the 60s and 70s the Netherlands went through a spectacular economic boom which required a larger labor force. In order to provide for this, the government decided to conclude recruitment agreements with countries like Yugoslavia, Turkey and Morocco, causing thousands to move to the Netherlands looking for well paid jobs.

Although this immigration policy was formally ended in 1973, immigration from these countries, especially Turkey and Morocco, continued and even increased. Influx and a relatively high birth rate made the total Muslim population in the Netherlands grow from half a million in 1990 to nearly one million in 2015.

This immigration, at first seen as an economical necessity, soon started to be perceived as a problem and political parties trying to put a stop to it have gained increasing popularity.

In the case of the Muslims mere number of immigrants wasn’t the only problem. Political leaders as Pim Fortuyn and Geert Wilders have grown popular for their criticism of  Muslim ideology, culture and traditions.

Media representation has played a big role in fostering fear and discrimination; the 2000s were marked by a cumulation of stories concerning rape gangs by Moroccan and Turkish youth, to be proved false  only after they had entered into the news.

Even worse for the reputation of Muslim immigrants and their offspring were two films, one  Submission (2004) inspired by the Somali-born intellectual Ayaan Hirsi Ali and directed by Theo van Gogh, the other Fitna (2008), written and collated by right-wing politician Geert Wilders.

Submission was specifically meant to be a feminist critic of the Quran. Soon after Van Gogh had been murdered by an islamist fanatic (November 2004) and Hirsi Ali had fled from the Netherlands, Wilders started to announce his coming film Fitna (Arabic, meaning  disagreement and division among people).

Fitna turned out a rather short production (17 minutes) showing passages of Quran verses accompanying images of   9/11, the 2004 Madrid train bombing and other acts of violence by Islamists as well as figures illustrating the increase of the Muslim population in the Netherlands and Europe, starkly suggesting its threat.

A recent survey by the TNS NIPO (a Dutch Survey Agency) revealed that 67% of the ethnic Dutch population did not know any Muslim personally, which however was not an impediment from having strong opinions about Muslims and Islam, and growing concerns and fears.

The creation of the Islamic State and recent terrorist attacks perpetrated in their name have caused a rising fear of the Islamic world in general. Lack of knowledge of the religion and people have caused the threat represented by Islamic extremists to be generalized over the whole Muslim population.

These fears were far from being unnoticed by the other side: this year the famous open markets on King’s day  were, in the Muslim-populated  quarters of the city, dominated by t-shirts proclaiming  I’m Muslim, don’t panic. Moreover, Muslims distributed free copies of the Quran around Amsterdam in an attempt to get people to know their religion.

Islamophobia in the Netherlands rarely manifests itself with aggression, but there have been cases of discrimination, hate calls, attacks on mosques and even on women wearing headscarves or burqas which have hardly been taken seriously by police and public opinion. The way it really shows in everyday life is by a cold indifference towards the Muslim population, by a lack of communication, interaction and empathy, and by a failure to recognize that the Muslim neighbor is as far from belonging to the terrorists groups portrayed by the media as the Christian neighbor herself.