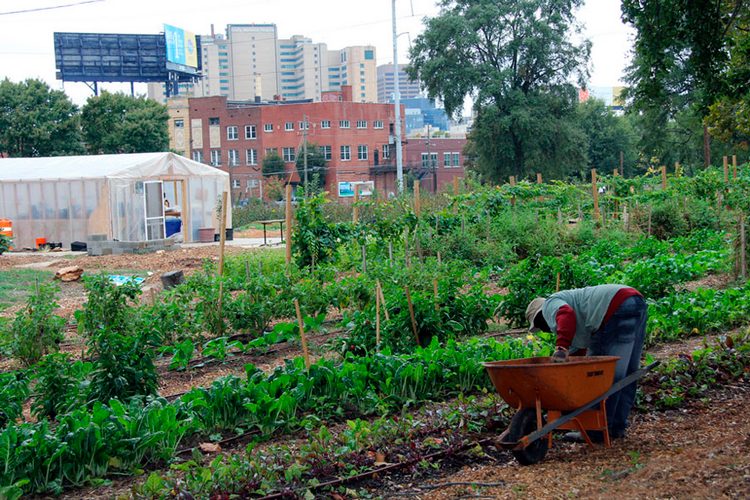 The Origin of Food Deserts

Food deserts have become a hot topic among social activists, with many NGOs cropping up to help alleviate their consequences. The USDA defines food deserts “as parts of the country vapid of fresh fruit, vegetables and other healthful whole foods, usually found in impoverished areas”, and estimates that 13.5 million Americans currently live in food deserts with 82 percent residing in urban areas. Evidence also indicates food deserts are more abundant in minority communities. While activists, non-profits, and policy makers seek methods to treat the problem it is important for us to keep in mind how this situation came to be. I will be looking at my own city of Atlanta as an example because it reflects patterns in other cities across the country. Indeed, Atlanta, like other cities, has seen an emergence of food deserts as a result of an American legacy of racism and segregation which prevented certain (black) Americans from accessing government programs promoting home-ownership, setting in motion a pattern of divestment away from their communities. This has resulted in de facto segregation, concentrated poverty, and, yes, food deserts.

Residential segregation has roots going all the way back to the immediate aftermath of the civil war. In his book The Souls of Black Folk, W.E.B. DuBois notes, “It is usually possible to draw in nearly every Southern community a physical color-line on the map, on the one side of which whites dwell and on the other Negroes.” This was a result of deliberate policy by southern authorities to prevent blacks from moving into white communities. Following the Second World War, the United States government began providing low-interest, long-term mortgages to Americans seeking to purchase a home. The purchase of a home is recognized as a primary mechanism for creating wealth, with homes serving several financial purposes such as a source of collateral. The ensuing boom in homeownership resulted in great prosperity for many Americans, however, this has not been true for all Americans.

Throughout this expansion of homeownership, the Federal Housing Authority (FHA) pursued a policy of redlining whereby the FHA indicated areas of high-risk loans by shading the area in red on a map. These red areas were almost exclusively black communities. The map below is an example of redlining in Atlanta. 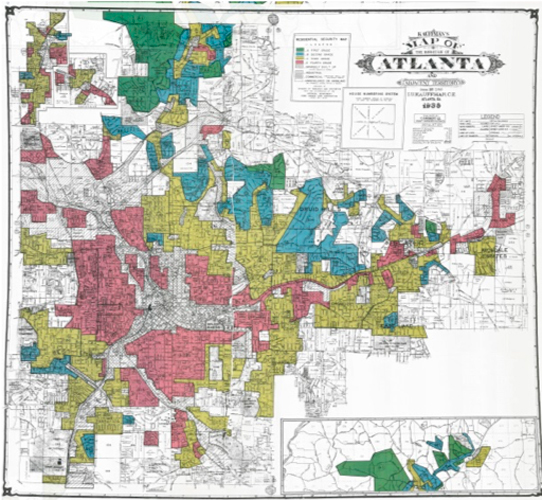 The FHA even provided white communities with methods to establish “restrictive covenants” that would withstand court scrutiny. Restrictive covenants were sets of legal restrictions to prevent the influx of blacks into white communities. The FHA accomplished this by appealing to white residents’ fears of declining property values, stating in their Underwriting Manual, “if a neighborhood is to retain stability, it is necessary that properties shall continue to be occupied by the same social and racial classes.” These policies exacerbated the mass exodus of white Americans from the city to the suburbs and effectively cut off black Americans from an important source of wealth generation. The graphs below illustrate the distribution of blacks and whites in the city of Atlanta. 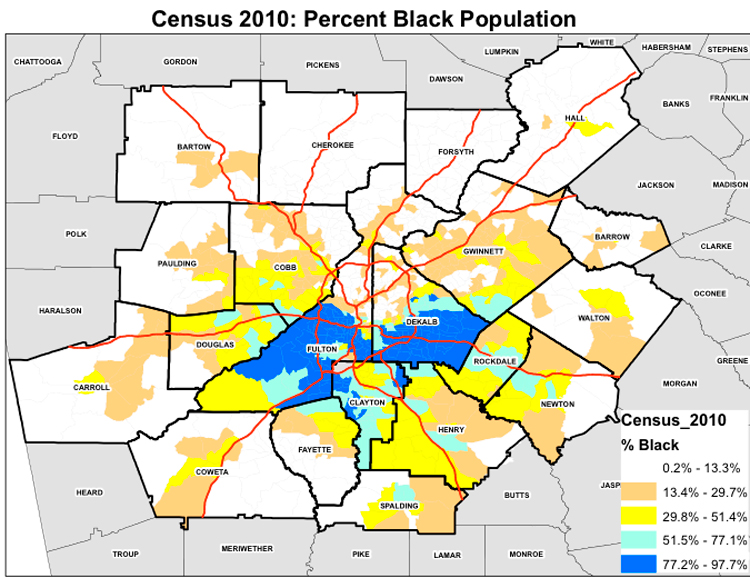 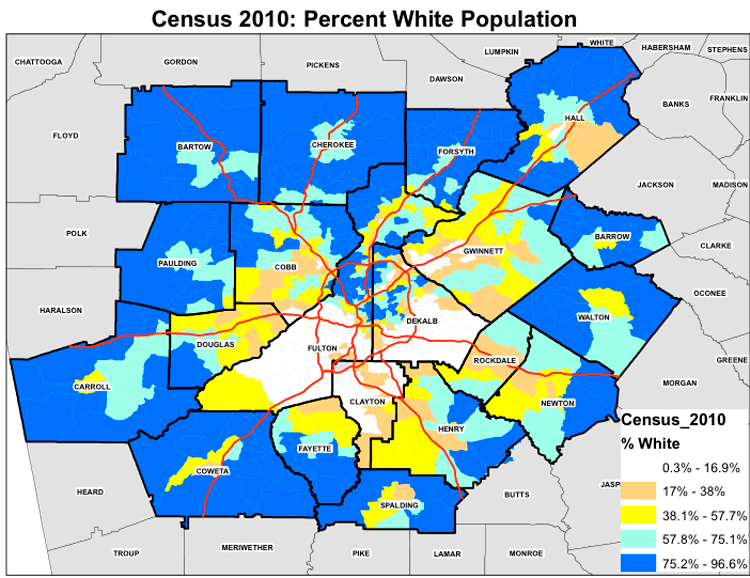 Throughout the 1980s and 1990s, the city of Atlanta experienced record growth. During this period, Atlanta added hundreds of thousands of people, jobs, and new buildings, but not everyone felt this new prosperity. While the region as a whole added over 348,000 jobs, the core of Atlanta only received 4,503 (1.3%) of them, while the northern region accounted for 272,914 (78.4%) jobs added.

In 1980, the city contained 40% of the region’s jobs. By 1990 that percentage had shrunk to 28.3%. The spatial mismatch of jobs along with the near absence of public transportation have made it arduous for low-income people to find quality employment. The consequence of these disparities in economic opportunity has been the emergence of a highly financially stratified Atlanta, with opulence in Buckhead alongside destitution in Lakewood Heights. 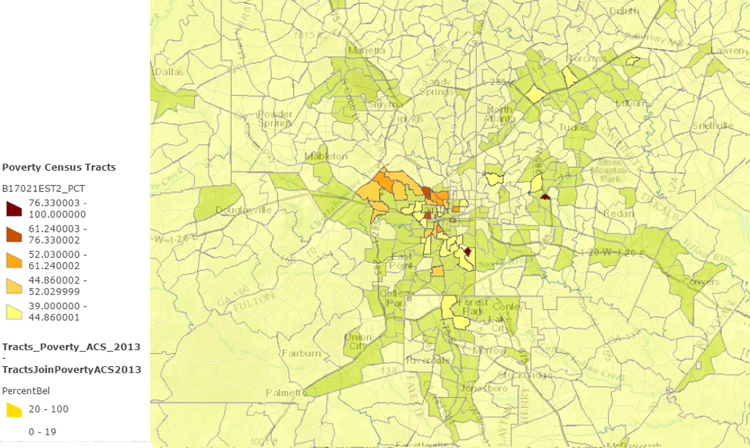 Alongside this divestment and economic stagnation, general trends in food retail have compounded the difficulties for people living in food deserts. Over the decades of the 1980s and 1990s, the market in food retail underwent a dramatic transition. Shares in the food retail market became increasingly concentrated, pushing many of the smaller retail companies out of business. As of now, the top 4 retail companies in the United States control over 31% of the market.  And as the number of food retailers has dwindled, so have the retail locations. With the development of large superstores such as Publix and Wal-Mart, companies have favored using increasingly large locations, so instead of the small corner store, we have the superstore covering thousands of square feet. This development, due to higher property prices in inner cities, has pushed many large food-retailers to locate their stores in suburban areas around wealthier populations where land is cheaper. Indeed, as Georgia Tech Professor, Dr. Bill Winders, noted “The population shifted north, the supermarket wars and the shift north in grocery store locations came simultaneous, with each trend reinforcing the other.” Whereas the share of supermarkets employing 50 or more employees in Sandy Springs was 66%, the shares in Forest Park and Lakewood were 7% and 3% respectively. This leaves inner-city communities dependent on smaller retailers to fulfill their nutritional needs- many of the popular destinations being liquor and convenience stores.

Forest Park and Lakewood are both located in southern Atlanta with Sandy Springs in the north. This level of concentration in poor communities is a major contributor to public health problems across the country. The combined problems of having little access to fresh food and too much access to fast food has been a major driver in the growth of obesity, particularly among the poor.

This problem of food deserts has been cyclical. Former FHA policies barring black Americans from government programs set in motion a process of divestment that, with every new development, was compounded and reinforced. Food deserts, concentrated poverty, housing degradation: they are all important problems facing our communities, but they are also symptoms originating from the same source- our legacy of racial discrimination.