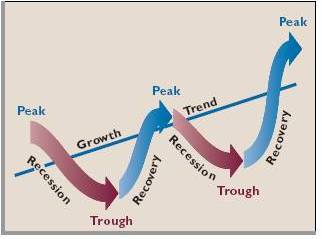 Modern society bases itself on the capitalistic framework – and adopted it as social, economic and politic vision. Stabilization policies, the fiscal process in a political democratic pattern create a cycle. The “business cycle” became a predominant issue in the 19th century, as it became clear that industrial output, employment and profit behaved in a cyclical manner.

One of the first proposed policy solutions to the problem came with the work of Keynes. Fiscal policy could be used actively to ward off depressions, recessions and slumps.

Nordhaus analyzed many kinds of economic systems with time dependence. Starting from the dynamic relation between inflation and unemployment – the Philips curve – his analysis demonstrated the trade-off between unemployment and inflation.

Economic issues are part of a greater pattern in which consume by a hand and political management bay the other hand create a not stable balance. Politicians should reach it instead. Same tools, economic solution’s models and a same social behavior can’t interrupt the circle.

Marx’s idea of capital looked at the foundations of the system. With its formulation of dialectical and historical materialism, the economic cycle is a never-ending process – renewing itself with the revolution’s cut and the class overrun. Deeply utopian, but sometimes true.

Possible solutions to evade the political and economic cycling could be negotiation. Abstaining from politically induced cycles would lead to a preferable state of the economy. Advanced countries, those with the highest GDP, show the highest cyclical variability because of their unplanned and open economies.

Assuming that capital has created a circle, a difficulty now is making intertemporal decisions, finding how to make a break with a maybe outdated system.