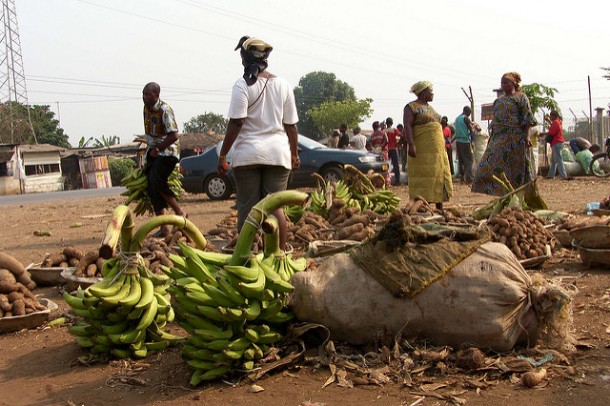 One supermarket – two banana brands – one choice to make. Which one do you take and why? Bananas are the most exported fruit worldwide and sales volume increases annually. However, unfair wages, inhuman working conditions or even enslaved workers on plantations around the Equator enable cheap prices in Western retailer shops.

As a consumer our decision of which product to buy is mostly driven by financial reasons. The principle “the cheaper the better” is followed in this bloody war of capitalism. Globalization renders the exchange of products possible. However, it also makes us accept exploiting resources such as the workforce. Globalization in a capitalistic system hence ultimately results in outsourcing poverty, slavery and plight.

Bananas are cultivated in areas such as Latin America, the Caribbean or Western Africa. Geographically wise, it’s impossible to cultivate them somewhere far from the Equator such as in Europe. Still, work on these plantations is not to be imagined as the land of milk and honey. Eighteen hours work day, only little pay and possible child labor – these are the bad working conditions happening at this very second. The graphic below,  published by Fair Trade International, gives an overview of how the income of one single banana is spread. Banana workers receive the smallest amount of the profit share while retailers receive the highest share.

A banana showing how its profit is shared among the product chain. | Fair Trade International

The valid question now is who to blame because it’s obvious that this is a vicious circle. Plantation workers mostly see their employment the only possibility to escape poverty. Illegal drug dealing or prostitution is something they tend to avoid. Same goes for the producers. Their advantage though is that they are ranked higher than the workers. The free market is not fair and producers have to remain competitive. Even tough big banana companies, such as Chiquita, present themselves with the words “improving lives” and boosting education, health and fairness on plantations, consumers should keep scrutinizing the truth behind these words. Chiquita’s headquater is located in North Carolina, which makes it easy to be unaware of slavery on their own plantations in South America.

Ultimately, the producer himself has to make a living. Export, Import, Tariffs and Ripening mainly are a run through step on the production chain whose resistance would barely be successful. Retailers ultimately have to stay competitive themselves in Western markets. Hence, cheap production is the ultimate solution. Plantation owners basically have to suppress worker unions (violently) for fair conditions. They wouldn’t be able to cover their costs anymore if they would raise wages. Hence, everybody will fail. “The existence of child labor on plantations is a product of simple arithmetic. Workers receive so little in part because the wholesalers and retailers abroad reap most of the profits, particularly with the recent consolidation of huge retail outlets like Wal-Mart, Costco and Carrefour,” states New York Times journalist Juan Ferero.

Bad working conditions are not be confused with modern-day slavery. Slavery is defined as the act of being fully held captive by another person for the reason of exploitation. Most common types of slavery is forced labor (food plantations, fashion industry), domestic slavery and sex slavery. According to the International Labor Organization (ILO) 21 million people worldwide are victims of forced labor. A lot of times, forced laborers on banana plantations are simultaneously subject to sexual abuse. The vast majority of such victims are girls and women. Modern slavery is to be found in any country, even in countries such as Spain, Austria or the United States, as shown in the below graphic which was published by the Global Slavery Index.

A global overview of the prevalence of slavery | Global Slavery Index

Working together in order to tackle this crime is the only way out. Just because you can’t see this crime from your comfy sofa chatting on our €600 smart phone, it doesn’t mean that it’s not really happening. Governments have to cooperate and figure out how they can facilitate the participation in a fair economy for everybody. Global players have to question their values and use their generated profit to pay fair wages. Single consumers have to be aware of their influence. In the end, with every single banana you buy, you accept the standards at the Equator. “Consumers have a powerful choice and voice. When New Zealand shoppers reach for bananas to put in the trolley, they can now choose Fairtrade certified bananas. These are independently verified, so people can be confident they are benefiting farmers and workers, rather than exploiting the,” says NGO Oxfam. Day-by-day you have the chance to make this world a better place. Are you willing to take it?