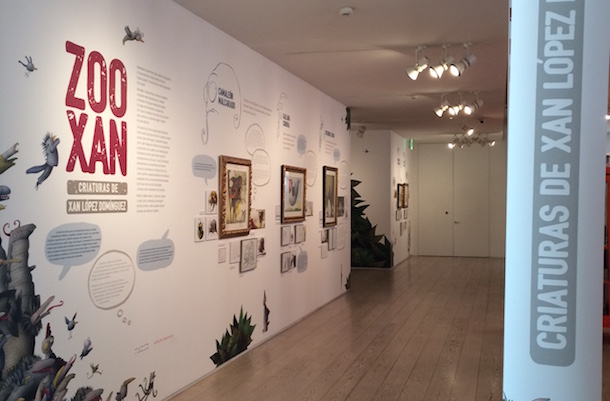 The ABC Museum Illustration and Design Center in Madrid is currently hosting the exhibit Zooxan: Xan López Domínguez’s Creatures from 27 May – 06 November 2016. Xan López Domínguez (Lugo, 1957) is the writer of 30 books such as La gallina Churra [The Churra Chicken] (2012) and El camaleón malcarado [The Ugly Chameleon] (2015), the illustrator of over 300 children literature books, and a designer.

The exhibit welcomes its visitors with a word of caution: “Here nothing is what it seems, and what seems to be is exactly what it is.” Indeed, the exhibition emphasizes the tangled connections and fantastic illusions of Xan López Domínguez’s creations. Five characters – fantastic, impossible creatures – prowl Xan López Domínguez’s mind and spring forth as fully formed personalities onto the page. “The artist has tried to domesticate them with patterns and textures,” the exhibition says—but to no avail. These creations are completely independent, wild beings, and these five characters are to be your guides to the world of Xan López Domínguez. 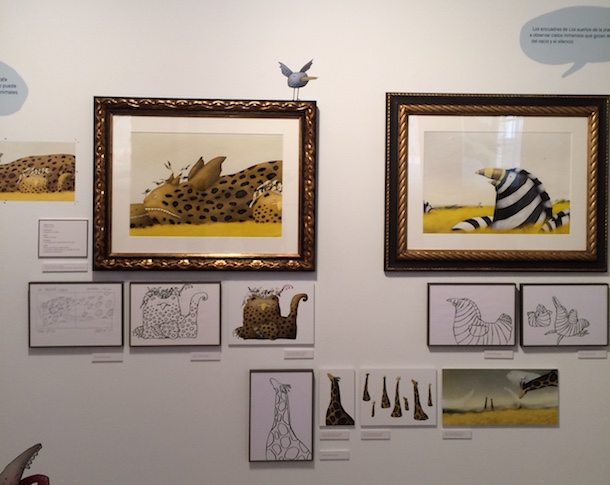 Each fantastic creature Xan López Domínguez has created has a unique history and a backstory. The kind of consciousness imbued in his characters gives each illustration a sense of keen personality and the illusion of strength and reality.

There is the Blind Crocodile with his roly-poly seeing-eye pet, a humorous construction based on the legends about the sewers of New York, and the Marramiau cats, each of which, Xan López Domínguez says, is “built as an independent individual… though acting in a similar way.” The Leopard Poultry Farmer and the Beaked Zebra, with their stripes and spots, Xan López Domínguez says “basically are chimeras. Is there anything that does not come from mythology?” He describes his creations’ odd metamorphoses and strange appearances as necessary: the beaked zebra, for example, “has made a metamorphosis of itself in order to have an acceptable appearance that allows it to survive in the illustration.” 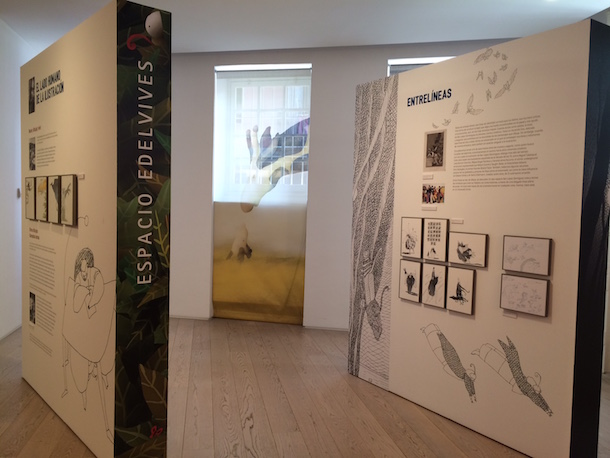 While the exhibition clearly focuses on Xan López Domínguez “animals, metamorphosis, and impossible syntheses,” it contextualizes this creation via textually rendered anecdotes from the artist himself. He describes how his love of illustration is linked to his childhood resistance to reading, his university leanings towards history and art history, and his completely informal, self-taught approach to artwork.

“On one occasion, when I was less than five years, I called Sister Lidia for me to come to their table and read a text. I remember I could not stop crying for fear of being wrong. Surprisingly, I did not make any mistakes. Sister Lidia looked at me, smiling, and said to me with all the love she could convey: “You see how well you’ve done?” I remember absolutely nothing from that text, but I can never erase from my mind the picture that accompanied it: a duck in the middle of a blue and black field. If the nun had asked me for that a description of that illustration I could have talked for confidently hours without shedding a tear,” says Xan López Domínguez, in a part of the exhibition entitled “Other Drawings Called Letters.”

Xan López Domínguez’s drawn lines imagine and reimagine the boundaries between literatures and histories. Entering this exhibit is like entering a jungle—of connections, of the mind, and of history. Every so often, you trip. Every time you seem to have wrapped your mind around one of his wild creatures, there is always a twist, a new reference, or some new connection to stumble upon.

Xan López Domínguez has received numerous awards and recognitions. Among them, several have been granted by the BBY, the International Fair of Bologna and Bratislava Biennial. He has been a Spanish candidate for the 1008 Astrid Lindgren Prize and the Andersen in 2010. For several years his works were part of the prestigious list White Raven. His graphic work has been exhibited in museums and galleries in Tokyo, Lisbon, Italy, London and Munich.

Have you been to the exhibit or the ABC Museum? Share your thoughts with us on Twitter @ROOSTERGNN.