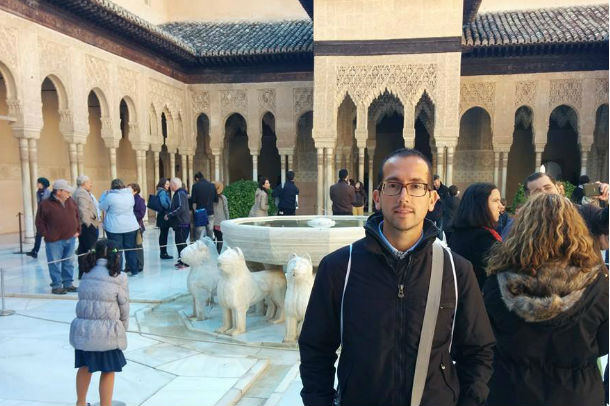 Leonardo Project in Spain: Interview with a Participant

The Leonardo da Vinci Program is a sponsored project by the European Union to promote the international mobility, professional exchanges and training. This program has been very successful among young Europeans. Its main aim is helping the European citizen to acquire new skills, knowledge and qualifications and have them recognised across borders. Thanks to European partners which offer a partnership according to the personal vocation of the participants, many people can proof their capacity.

Giuseppe Fanolla is an Italian boy who participated to Leonardo Project in Spain. Giuseppe is from Torremaggiore, a small village of the region Puglia, in the south of Italy. He has 30 years old and he studied at the Faculty of Agriculture and he also has attended a Master in Florence. Now he is working in Bologna.
So why such a qualified person has chosen to participate at the Leonardo Project and what has been the result, Giuseppe will explain us.

How did you hear about the existence of the Leonardo project?

Giuseppe Fanolla: I heard about Leonardo project by some European and universitary web sites, about intercultural exchanges. Initially I would liked to participate at the Erasmus program, but I was not more a student, so I looked for something that could be made even by the graduates.
Why did you decide to apply to Leonardo Project?

I was so tired of the job situation in Italy. This is because in my Country the work situation was black and still is like this. The situatione is locked, there were no good job opportunities for graduates, payroll nonexistent or poor, young worker are exploited and frustrated. S
pecially for the graduates. Just a few companies are good, but as usual available just from suggested people. So I said to myself: Why don’t go abroad with a European project among other recognized and almost for free?

When did you participated and for how long?

I stayed there for 3 full months. I started on September 2014 and returned on December 2014.

Who decided the destination? Did you choose Spain?

At first I choose England, then because this destination was sold-out, I have been fished out for the second choise which I had requested: Spain.

What information did you received before departure?

Actually, the informations haven’t been enough. ANCI, the Italian association of our region who promote this project didn’t give us many answer. Some information by email, the contract sent by email a few days before going to sign in the Bari’s ANCI.
The same did the Tecla association. However all in all, it was a great experience and everything went smoothly.

Finally, you arrived in Spain, in Jerez de la Frontera. Tell us your work experience.

I worked at the ‘Costa Ballena Ocean Golf Club’, located in Rota – Cadiz. On the coast a few kilometers from Jerez. Great place, colleagues were generous, helpful, patient in trying to understand my Spanish that at that time was no so good, but in the end I improved a lot it.
My manager was a professional man and very helpful, I used to go to work with him in the morning and come back with him. I was doing practice in the field as a green keeper, working with colleagues in the office and sometimes I was with my tutor to work also on the budget and work organization.

What was the contribution of the European Union?

It has contributed by paying the journey ida y vuelta (all inclusive) also fees, rent accommodation, pay consumption. We also got a pocket money of 150 euros per month as a contribution to transportation, like bus or train if necessary, and food reimbursement.

What were the positive aspects and what the negatives ones of this experience?

That has been a unique experience! I highly recommend everyone to do. I learned a new language, I got many professional contacts and I made new friends that I grow even today.
I discovered new places, new traditions, new cuisine. I learned that it is not so difficult to live abroad. It needs focus and determination. Of course with Leonardo has opened up new roads, new opportunities and new contacts to take full advantage of the work and in life in general.
It is not a secret that I’m trying to leave Italy, although the aim of Leonardo is to do work experience abroad for young graduates and then they could bring this experience to Italy to integrate them into business. But all this is pure utopia in Italy.

Talk about how you’ve lived in Spain. Did you already know Spanish? You had a chance to learn it when?

Divinely: Work, beautiful nation, great climate, highly efficient services. I was shocked by the enormous gap present between Italy and the rest of Europe. I knew the Spanish language and I understand enough it, but I didn’t know how to talk and I never got a particular certificate, I did only a course during the high school.
The program included lectures before leaving, but were made only for who was chosen at the beginning. In the end we learned better talking than those who had followed the course in Italy.

The work you’ve done has been useful for your career? Did they propose you to work longer?

No, but my manager and me are still in contact. They send to me job opportunities via email. But I can say that the Leonardo worked, because when I was in Spain a company contacted me for an interview, and now I work there. The Leonardo enriched my mind, my CV and made me mature a lot in many ways.

Plans for the future? This experience will affect your future work?

I will never stop improving more and more my skills and capacity through training, refresher abroad. I’d like to be a promoter of new initiatives like this and involve more young people to make these experiences.