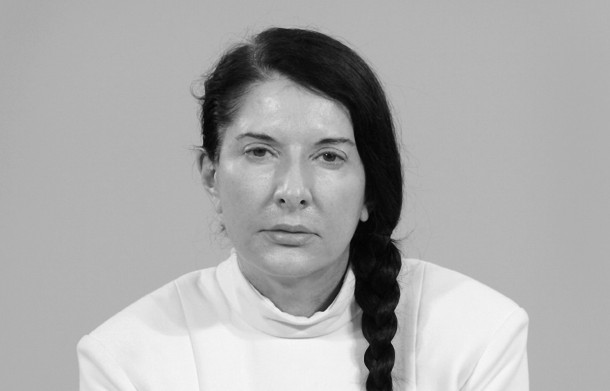 Marina Abramovic: Beyond the Borders of the Body

Reacting to art is like reacting to blades: it is never a state of indifference how you feel.

Marina Abramović is a woman who makes of her body the servant of her art: her body is the painting where she challanges her physical and mental boundaries.

One of the most polarizing artists ever. A tribute to woman who can hurt like a punch in the gut.

Marina Abramović is a 69- years- old woman born in Belgrade, Serbia. During the 1970s, Marina was among the first generation of performance artists who started to use their body as an artistic medium.
However, she had to wait approximately twenty years before being accepted as an artist: her parents have never really appreciated her work and her professors ( during the studies at the Academy of Fine Art) didn’t recognize her value.
“They thought I had to be interned”, she says today.
Marina had to walk a long and tricky road before being accepted for what she really is: a brave woman whose intentention is to challange the mental and physical limits that are considerated insurmountable.

Thanks to Art, Marina demonstrates how far we can go from where we are.
Marina started to be recognized as an artist after twenty years.
Why?
During her performances, Marina is always on the border between life and death.
She plays with fire. But also with blades, blood, oxygen, guns and razors.
Her body is the painting where she breaks through social convention and tries to face her own fears.
That’s why it’s not easy understanding Marina Abramović:  her performance can always turn into a disturbing, corporal and emotive experience.

Marina Abramović is totally available to the public for 6 hours.
She prepared a table with 72 objects and invited people to use them on her however they wished.
“Some of these objects give pleasure, others pain, I assume full responsibility for six hours”, she said.
At the beginning, the public only used objects  of pleasure on her but then, the performance turned into something dangerous:
Marina had been cut with razor blades, men approached her sexually and a loaded gun had been put in her own hand directed to her neck.
“I am horrified, but maybe I shouldn’t be. A female body without will in the hands of other human beings brings out the executioner nature of mankind.” – Marina Abramović.
– Lips of Thomas, 1975
While Rhythm 0 tested the relationship between Marina and her public, in Lips of Thomas , the artist challenges her own body’s boundaries.
Marina ate a kilo of honey and drank a litre of red wine. Then, she broke the wine glass with her hand.
From that moment, the performance turned into a more and more violent experience: Marina cut a five-pointed star into her stomach with a razor blade and whipped her body (Referring to Christian themes and rituals of repentance). Then she laid down on a cross made of ice blocks.
After 30 minutes, people couldn’t hide behind their passive status as observers and carried her away.
– The artist is present, 2012
Marina sat in silence for 736 hours and 30 minutes. People were invited to sit and look her in the eyes without limits of time.
The performance depended on the emotive implication of the person.
Everyone experienced an unique and touching moment with the artist.
“In the end, the time that we had spent together, turned into a private and vulnerable contact that every person built with him or herself ” – Marina Abramović.
To get in touch with Marina and have more information about her performances visit the website.
This website may use its own and third-party cookies to improve its services. By interacting with our website, you authorize this use. About our Cookies Policy.