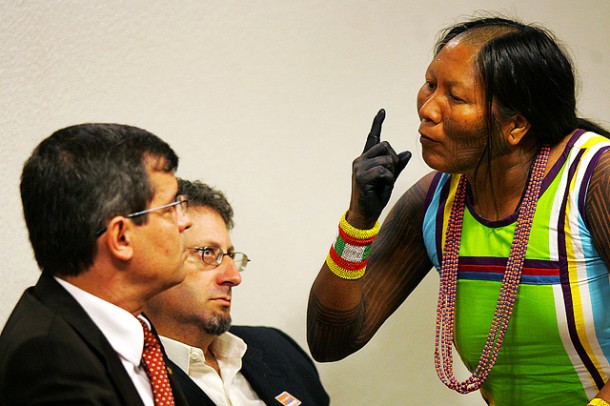 The real cost of Belo Monte

The true costs of Belo Monte considerably exceed the official R$ 19 billion budget. Current estimates for the engineering and construction costs vary between R$ 24 and R$ 30 billion ($13 – $17.5 billion USD). Indirect costs due to the influx of migrant workers and relocation of local dwellers are estimated up to R$ 8 billion. […]

In addition, the financing of the project is heavily subsidized by the Brazilian National Development Bank BNDES and ultimately by Brazilian taxpayers through the federal government’s use of funds from the Workers’ Assistance Fund (FAT) and public pension funds. To keep Belo Monte afloat, BNDES is offering 30-year loans at the unprecedented interest rate of 4%, far below the cost of capital, while also serving businesses tax exemptions the value of which is estimated to be roughly R$ 6 billion. BNDES has promised to extend its largest loans ever to Belo Monte – equaling 80% of the project’s cost while coordinating the remaining 20% of private financing – without which the project could not exist.

Let’s also keep in mind that the Norte Energia consortium is led by the state-controlled Eletrobras group with a 49.98% of shares (15% by Eletrobras, 15% by CHESF and 19.98% by Eletronorte). Moreover, in August 2010, the government closed deals with 11 companies for the construction of Belo Monte. Among these, Odebrecht, Camargo Correa and the Andrade Gutierrez – the same companies who dropped out the auction few months before due to low bid price – according to the deal, must detain at least the 50% of the R$ 15 billion work.

Operação Lava Jato (English: Operation Car Wash) is an investigation being carried out by the Federal Police of Brazil, Curitiba Branch since March 17, 2014. The case is actually rooted in a money laundering investigation dated back to 2008, but it has expanded to cover allegations of corruption at the state-controlled oil company Petrobras, where it is alleged that executives accepted bribes in return for awarding contracts to construction firms at inflated prices.

As reported by Reuters, with a detailed timeline of the events:

[Up to] Aug 14 [2015], Prosecutors and federal police in Brazil have unearthed the country’s largest-ever corruption scandal by linking a ring of black-market money changers to a price-fixing and political kickback scheme at state-run oil company Petrobras .

Executives from two dozen engineering firms are accused of inflating the value of contracts and funneling the excess funds into their own bank accounts and to political parties, including President Dilma Rousseff’s Workers’ Party.

[…] Prosecutors in the southern city of Curitiba expect to continue for at least two more years. An investigation into politicians is also advancing in Brasilia.

Of course, the leak from the oil industry soon spread out over the electricity one. In June 2015 the investigation was extended from Petrobras to Electrobras, specifically regarding Belo Monte. In the same days, Brazilian officials arrested Marcelo Odebrecht – head of Odebrecht and grandson of the founder Norberto – and Otávio Azevedo, Andrade Gutierrez’s CEO. Allegedly, they helped to mastermind a cartel that stole billions of dollars from state-run oil company Petrobras with the help of corrupt politicians to whom they paid kickbacks. 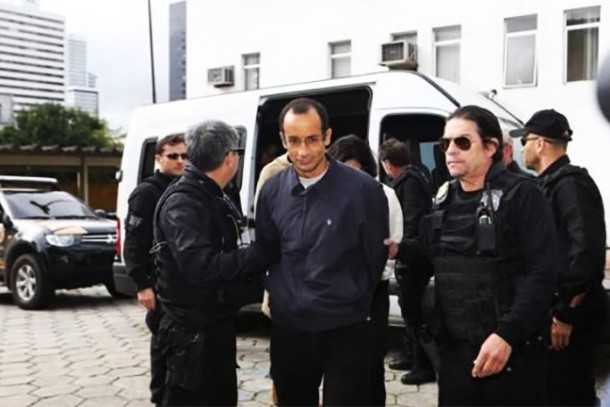 Up to the end of July, over 15 companies of the electricity sector were investigated.

Actually, further developments showed how Odebrecht was leading the whole system, as depicted in this scheme. On September 29, Brasilian persecutors also accused Gilberto Carvalho, chief of staff to former Brazilian president Luiz Inácio Lula da Silva and a top aide to Rouseff, of being the Odebrecht’s man into the Government.

There are also multinational foreign companies involved in the scandal. Two of the major one are French.

The giant Alstom runs in Brazil a joint venture with Bardella named “Indústria Metalúrgica e Mecânica da Amazônia” (IMMA), specifically focused on hydroelectric power plants. They recently signed two new contracts for mechanical supplies to the Belo Monte complex, as they state on their own website. In September 2015 though, a Public Persecutor and a financial analyst from Switzerland flew over Brasil to acquire documentation onto bribes allegedly paid by the Frenc holding to Brasilian public officers.  Not surprisingly, Alstom seems to be accustomed to ‘brazen’ and ‘astounding’ foreign bribery schemes, as the record $772 million fine in US testyfies.

The other heavyweight involved is Engie, better known before April 2015 as GDF Suez. It operates in Brasil through the major stake in Tractebel Energia, which has got a role in Belo Monte. It is the same Tractebel, as came out of the Lava Jato investigation, which allegedly financed by a R$ 40,000 donation the election campaign of Afonso Hamm, federal deputy of the Brasilian Progressive Party. To be sure of an influence in the right circle, Albert Frère, the richest man of Belgium and head of the group controlling GDF Suez, allegedly financed also the presidential 2010 campaigns of candidates Dilma Rousseff and José Serra, in order to ease the feelings between his Astra  and Petrobras. 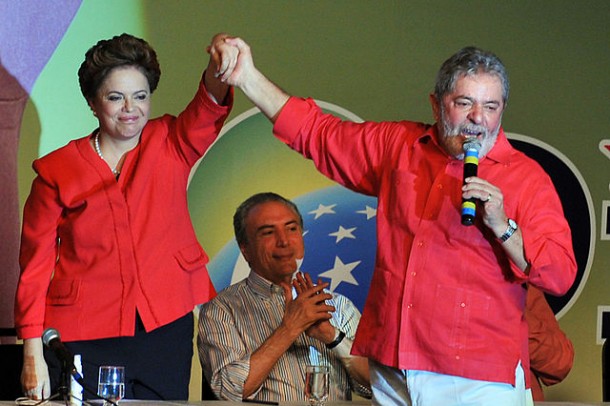 Dilma Rousseff and Lula, present and former Presidents of Brazil, by Valter Campanato/ABr

The French Government holds the 33.6% of Engie (or GDFSuez) and 21% of Alstom shares. France detaining stakes in companies with such a dodgy behaviour seems a kind of incongruity, taken into account that they are officially supporting since a long time the icon of the indigenous resistance. After François Mitterand and Jacques Chirac, also Francois Hollande received, at the Elysée palace, the legendary Chief Raoni Metuktire, “a living symbol of the last tribes fight to protect their millenary culture which is directly connected to nature itself”.

What is Operation Lava Jato, detailed explanation of the bribery scheme under Lava Jato investigation, by BRS Explica