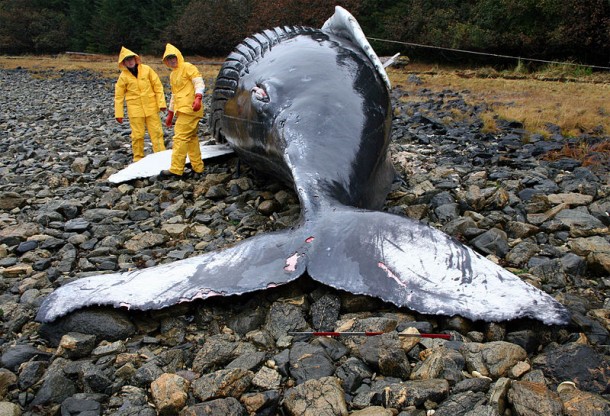 In December 2015 over 300 whales washed-up on the southern shores of Chile. The apocalyptic sight of the dead and decomposing creatures on television screens across the country was the first incident to put the spotlight on a larger issue at hand. Then, in the beginning of 2016 harbors of the Region La Araucania were sparkling silver and smelling rotten, with thousands of tons of sardines floating lifeless in the water. The marine death toll continued to rise through April and May, as beaches washed up on separate occasions with clams, mussels and birds.

Scientific investigations have declared the disaster a “red tide,” explained by the US National Ocean Service (NOS) as a natural phenomenon in which large quantities of algae grow out-of-control in a concentrated area with the potential for harmful effects. A harmful red tide is when the massive amount of algaes deplete oxygen in these ocean currents, and produce natural toxins that can infect surrounding marine life. NOS explains that people can die from eating the intoxicated shellfish produced by red tide, but the concern goes beyond the health of people and marine ecosystems. Harmful algae-blooms can be debilitating to local and regional economies.

The current red tide affecting Los Lagos region in Chile is one of the most severe in the region’s history according to Benjamin Suarez, director of the Marine Toxin Lab of the Universidad de Chile. In the same report he says that at least 10 cases of intoxication have been registered. Perhaps more importantly, thousands have seen their financial resources disappear.

In April the massive beachings left the Chilean government with no choice but to declare a “zone of imminent sanitary risk” in several regions, according to the publication La Tercera. A few weeks later a “zone of catastrophe” was declared in the Region Los Lagos, as reported by Bio Bio Chile. The region includes the provinces of Osorno, Frutillar, Puerto Montt, and the island of Chiloe– communities who rely deeply on fishing to make a living, and the disaster has left local fishermen wondering how they will put food on the table for their families. The catastrophe prohibits the extraction of shellfish from the ocean, which leaves a huge portion of the population in Los Lagos with very little work. According to Bio Bio Chile, fish markets in the provinces are experiencing a 70% decrease in sales.

In May, Ziola Bustamante, President of the National Confederation of Artisan Fisherman (Conapach) says that fishermen had had no a source of income for over two months. In Chiloe affected individuals took to the streets to demonstrate the the gravity of their situation and protest the government’s failure to find an adequate short-term solution. They were unhappy with the original amount of the subsidy offered by the central government, 100 thousand pesos (approx. $145.00 USD) for around 500 families.

Forced by the protests the government had to up the ante in the beginning of the second week of May. La Tercera reports, the government would begin to deliver the subsidy to around 5,000 affected families– 300 thousand pesos (approx. $431 USD) and 150 thousand pesos ($215 USD) for the following three months, despite not having reached an agreement with the fishermen unions.

“Do you still believe that it’s a red tide? Or is it consequence of the contaminated salmon that were dumped into the ocean interior of Chiloe? A month ago more than 70 tons [were dumped.] Authorities warned about the damage this would cause, but the salmon industry companies ignored them… Now we see the grave environmental damages. Clean areas contaminated by the waste of commercial salmon hatcheries,” published Ramon Navarro.

Navarro is a Chilean environmentalist, world-champion big-wave surfer and protagonist of the Patagonia film “fisherman’s son,” and he gave a voice to fellow artisan fishermen over social networks. Although Navarro brought attention to suspicions of many fisherman, he has not had his suspicions backed by science or proof.

Part of what Navarro said is plain and true: official documents show that the Chilean Navy approved salmon hatcheries to dump over 4,500 tons of rotten salmon in the interior waters of the Los Lagos region. Confirmation of the controversy was reported to the public the shortly before red tide appeared, sparking the presentiment among fishermen and other locals that it was a factor in causing the toxic algae-bloom. However academics and biologists from several Chilean universities discarded the relation between the two events.

“There is no relation between the salmons and the red tide,” said Leonardo Guzman, from the division of aquaculture of the institute of fishing development (IFOP), in a report by Aqua. Jorge Navarro, biologist and marine sciences professor, continues, “Based on the official information about the distance (of the dumping), currents and other factors, the dumping would have no relation with the red tide phenomenon or the death of species. There are other versions that say that the dumping was much closer, but it is a rumor that I do not honor while there is not exact data.”

Hector Kol is a Chilean biologist who is adamant that the salmon industry is a player in the disaster. However he believes that the red tide is caused by the permanent functioning of the salmon hatcheries, not by a single event like the dumping of contaminated salmon. He spoke extensively about the root causes, effects and possible solutions in an interview with the publication El Ciudadano.

In the interview he explained his hypothesis that the dumping of contaminated salmon did not spread the toxins that caused the mass-poisoning, but the practices of the salmon industry over the past 40 years have created an environment hospitable to toxic algae-blooms.

Kol explains that the commercial production of salmon has increased by 15 times what it was just five years ago, and he says that such growth has been allowed by corrupt law.After presenting his hypothesis to the media Kol’s qualifications were attacked by sources who reported that he was not a real marine biologist. However, his university classmates who were quick to his defense published a letter clarifying that he is indeed a qualified biologist from Universidad de Chile. The letter, which is signed by 11 biologists and science professionals reads, “Along with confirming the solid academic preparation of Hector Kol, we want to affirm that the immense gravity of the problem provoked by the salmon industry in the southern ocean merits serious and inclusive discussions…”

Whether the salmon industry and the algae-bloom are directly or indirectly related remains disagreed-upon. Meanwhile, Aqua reports that the government has deposited the subsidies of 750.000 pesos (about $1000 USD) to approximately 6,000 families affected by the catastrophe, despite not having arrived at an agreement with the local directors of artisan fishing. The amount is meant to cover expenses for a period of four months. Recipients of the payments include registered fisherman inscribed in Sernapesca (National Fishing and Aquaculture Service) as well as a group of “informal fishermen” who also depend on the affected resources.

However Kol says that the problem won’t be solved with a bonus of 600 thousand pesos or a bonus of 10 million pesos.

“My hopes are that the people of Chiloe understand that this bonus should be taken as a compensation for the damage that they have been caused, but not as a solution to the problem. Because this has no other solution than the inevitable eradication of the salmon industry.”

In July, four months after the zone of catastrophe was declared, the government is only recently approving some regions are free from toxins and removing the prohibition on the extraction and transportation of shellfish.

However, the concerns and demands of the region are not expected to disappear, and the government is expecting their complaints. Aqua informs that the The Minister of Economy announced that the they have decided to dedicate a space for the beginning of discussions where demands regarding the region’s development will be oriented and proposed.

With the imminent arrival of more salmon farms, opposition is expected from those who question their environmental effects, especially after the speculation and spotlight put on the salmon farming industry as a result of this devastating red tide. According to La Tercera, the subsecretary of fishing informs that there are 72 pending applications for new sites of cultivation of salmon in the region Biobio alone, part of the area that is still recovering from the massive, toxic algae-bloom.