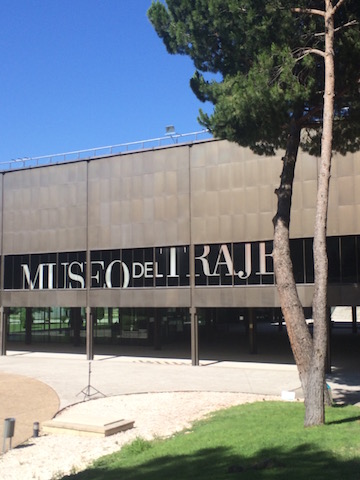 Explore Spain’s Relationship with Fashion at the Museo del Traje

Ever wonder what influenced Spain to become the style capital it is today?

The Museo del Traje in northwest Madrid takes you on a journey of the evolution of fabric and fashion in Spain from the 1500s to the present day taking note of the social and political influences of the times.

Fashionistas and anthropologists will truly enjoy this museum and seeing how the garments are meticulously preserved.

A dress from the 1800s with French influences. This style of dress became popular after the French Revolution

The collection, comprised of more than 160,000 pieces is set under controlled conditions, such as lighting and temperature as a way to understand the cultural and anthropological aspects of clothing from the past.

Highlights include a mock catwalk complete with lights and runway music as you exit the main exhibit, the multiple and constantly changing temporary exhibits, and the hands on learning and multi-sensory area which aimed to allow guests to understand the historical transformation of women and men’s garments, the evolution of the silhouette, tools and technology used to create garments, the formation of fashion and identity and why we choose to dress the way we do. And it goes much further than choosing to dress for modesty or warmth.

The Museo del Traje, or Costume Museum, came to be its present self in 2004 with a Center for Ethnological Heritage Research but its history began in 1925 as the Exhibition of Regional and Historical Suit.

The museum constantly rotates special exhibits. This summer, be sure to catch the “Toys Speak German” display of antique toys and figurines or the photographs of French photographer Josephine Douet, presented to “generate a speech about the history of costume that shows the endless cycle of influences and inspirations.”

It is enlightening to see how events affected dress such as after the expulsion of the Arab and Jewish people from Spain there was a void in the Spanish textile industry. The expelled had often worked as jewelers, cobblers, tailors, and tanners during these medieval times. Italians sought to fill with velvet and gold and silver thread until the mid-1600s, when French fashion and artists started to influence the fashion of the day.

On display, there are multiple versions of the Spanish traditional garments and accessories: Majo for men or maja for women. The majo consisted of three garments: a jacket, short waistcoat and brightly colored and decorated breeches, with a sash around the waist and a hairnet. shoulders in gilt thread. The majas’ costume featured jacket with lapels that fitted tightly at the waist without stays and was worn with a black skirt the skirt and the mantilla, a Spanish lace shawl. Clothing archives from the the middle class, children, and even undergarments were also on display to allow the viewer to understand the many depths of Spanish society.

The broad avenue, known as the Paseo del Prado in front of the museum of the same name, was the spot where the Bourgeoisie promenaded the latest fashions, starting in the 18th century. Women in carriages donned the latest French styles in bright colors, while those on foot resorted to black skirts. Men also indulged in the popular French style but would still wear the traditional Spanish cape.

In the 20th century, Spanish fashion starts to take a shape of its own with over 100 fashion houses creating haute couture across the country such as the creations of Spanish-born Cristobal Balenciaga debuted his first collection in Paris in 1937 and was a revolutionary in his designs. Other Spanish designers displayed in the museum highlighted include Pedro Rodriguex, Santa Eulalia, and Asuncion Bastida, who created the Cooperativa Espanola de la Alta Costura, an imitation of the Parisian counterpart, Chambre Syndicate de la Haute Couture.

In addition to the costumes, paintings and art are the easiest way to come to understand how men and women dressed. The famous Spanish artist Francisco Goya served as a primary source in depicting the fashion of the day. Later, designers would hand draw catalogs or magazines for their wealthy clients and make copies for the masses. The most popular magazines of the times were Correo de Las Damas and La Moda. Now, magazines such as Telva, Estilo, Vogue Espana and Elle are dictators of Spanish fashion, as well as La Moda, which continues to publish fashion content to this day.

The museum is set back from the tourist zone of Madrid, accessible by taking Metro Line 3 or 6 to Moncloa, and then about a ¾ mile walk through a shady park.