My Path to Picasso’s Guernica

Cleo CharpantierAugust 10, 2017
MADbudget: a local's guide to Madrid0 Comments 0
The following article is published in the #RGNNMadrid Magazine: Vol. I, Summer 2017, produced during ROOSTERGNN Academy’s Travel Journalism & Photography Internship Seminar in Madrid, Spain, under the editorial direction of RGNN Expert and Mentor Al Goodman. Follow #RGNNMadrid for all of our Madrid coverage.

If you’re visiting Madrid in 2017, there is no better time to visit Picasso’s monumental Guernica at the Reina Sofía Museum. In celebration of the painting’s 80th anniversary, the museum has put together a special exhibit titled Pity and Terror, about Picasso’s work leading up to its creation and the influence the painting has had as it traveled the world since. This exhibit, which has been gathering a crowd all summer, will be on view until September 4, 2017. 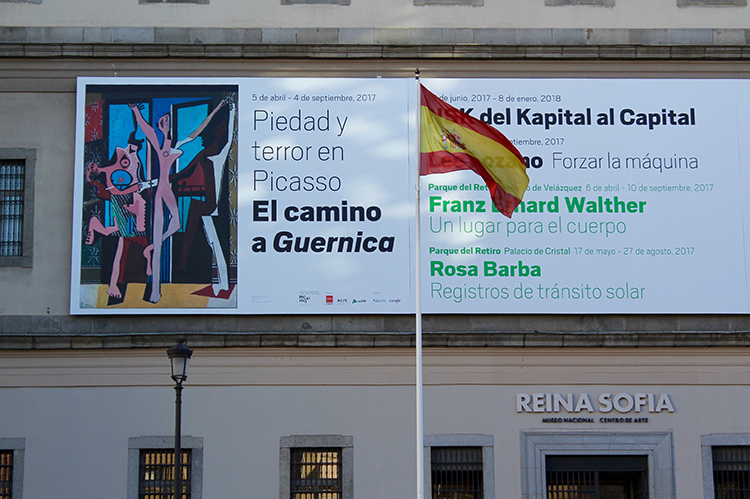 The Pity and Terror exhibit starts with a model of the Spanish Pavilion built for the 1937 World’s Fair in Paris. That is where Guernica was first displayed. The Spanish Republican Government had commissioned a work of art by Picasso, hoping it would gather support for their effort to defeat General Francisco Franco and his nationalist uprising in the Spanish Civil War. On the wall next to the model plays a slideshow documenting the bombing of the small Basque town of Guernica. On April 26, 1937, a market day, Guernica was attacked without warning by warplanes from Hitler’s Nazi Germany, a raid which historians say Franco allowed. It is seen as the first intentional aerial bombing of civilians. The photo reporting moved Picasso to begin work on what would become Guernica.

The following room is full of sketches Picasso drew as he was preparing for Guernica, part of the museum’s permanent display. There are detailed sketches of the characters in the final painting, and messy sketches about its composition as a whole. Here I spoke to Maria Belen Gaete, a young visitor from Chile. She found the sketches to be full of pain and emotion, and called Guernica an “important and painful success story” from the despair that was the Spanish Civil War. The exhibit made her think about the consequences of that war and World War II which shortly followed. When I asked if the exhibit made her think of contemporary politics and warfare however, she was hesitant to answer but did say that it is a reminder that “no one ever wants a war” and that it underlines the importance of finding diplomatic solutions before turning to warfare.

In the following room, all alone on the main wall, hangs Guernica. Its imposing size, muted colors and jarring style provokes a reaction before the shocking content can even be comprehended. It is clearly the most crowded room in the exhibit, possibly the museum. Visitors from around the globe and from multiple generations gather in from of the paining in a respectful silence, rarely even approaching the rope that protects it. Two guards stand watchfully by, preventing anyone from taking photos. 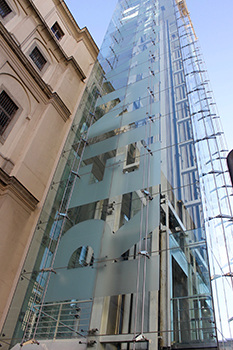 At the end of the exhibit, three rooms are dedicated to the painting’s travels. Picasso insisted that Guernica could not be displayed in Spain while Franco still ruled. Because of that, the painting went on a world tour to Europe and Scandinavia before being housed at the New York Museum Of Modern Art for safekeeping. Its arrival in New York City in May 1939 and was used to garner support for the refugees of the Spanish Civil War, which Franco had recently won. During its 30 plus year stay at the MOMA, its gallery was used as a space for anti-war vigils and protests. As noted in this exhibit’s pamphlet, “Guernica had become our culture’s tragic scene.” After Franco’s death in 1975 and Spain’s transition to democracy, there were painstaking negotiations before Guernica finally arrived in Madrid in September 1981, where it was displayed behind bulletproof glass in an annex of the Prado Museum, later moving to its current location at the Reina Sofia without such severe protection.

And yet, in the 80 years since Pablo Picasso painted Guernica to decry the bombing of civilians in Spain, aerial attacks on defenseless people seem to have increased in frequency while drawing ever less attention. Are we in danger of growing numb to the violence Guernica depicts, and if so what can we learn from this memorable painting?

Two of the museum’s cultural facilitators, Cristina Lopez and Alwodena Learte are available to answer visitors’ questions about the art and facilitate a weekly lecture in relation to the Pity and Terror exhibit. The lecture series, which runs every Friday at 11:30am, tries to provoke a reflection on “what the visitors know [about the art] and what they can learn [from it]”. The lectures have been quite popular this summer, and since they are capped at thirty people, it is worth arriving an hour early to sign yourself up for a spot.

I told Cristina and Alwodena that seeing Guernica and knowing its history made me think about current civilian bombings. In response, Cristina said that “Guernica is meant to represent all wars.” Alwodena noted that it has been the source of inspiration for many other anti-war representations, and has been used to garner support for peace movements. Still, Cristina thinks it doesn’t have the same effect today as it did when it was first painted. She reminded me that when Guernica was bombed, “it was a new concept that you could be killed from above, shattered to pieces by aerial bombs.” Picasso’s Guernica tries to grapple not just with death, but with the violence of this new form of civilian murder. She considered this the most important part about Guernica and its impact. As to why civilian bombings seem to receive less attention today, Cristina made an interesting point: “When Guernica happened, it was well documented by photo journalists. Those images were very, very powerful. And now our visual culture is so oversaturated, and we’ve forgotten how to read images, so now we see a lot of images but we don’t understand them any more.” Today civilian bombings are ignored because there are too many conflicts and too many images for any to rise to the top and “become our culture’s tragic scene”, as Guernica did. While we may be numb to the photos we see of current warfare, it is hard to remain numb in front of Picasso’s tremendous Guernica.

Lecture: Every Friday at 11:30am, included with ticket price