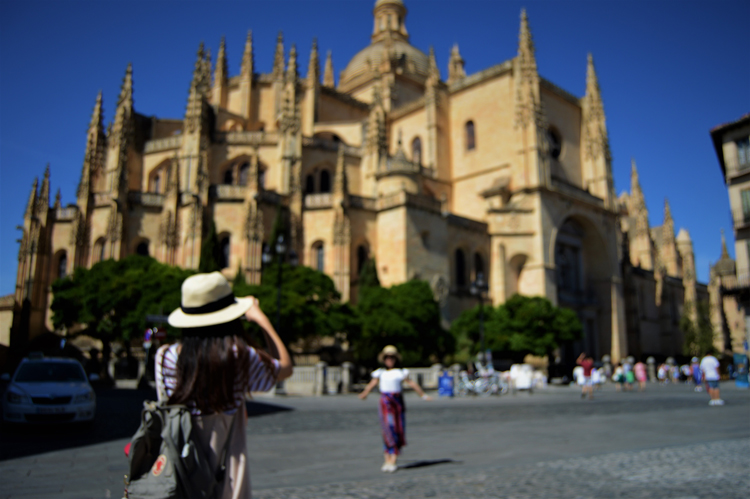 The Three E’s Necessary for Your Packing List: Education, Effort, and Empathy

Rachel PeetSeptember 2, 2017
MADbudget: a local's guide to Madrid0 Comments 0
The following article is published in the #RGNNMadrid Magazine: Vol. III, Summer 2017, produced during ROOSTERGNN Academy’s Travel Journalism & Photography Internship Seminar in Madrid, Spain, under the editorial direction of RGNN Expert and Mentor Natalia Martín Cantero. Follow #RGNNMadrid for all of our Madrid coverage.

All I knew was that I longed to leave, to flee, to escape my small-town borders and “broaden my horizons” once again. It had been six months since traveling outside of the United States, and six months too long. I had caught, and still have, the travel bug. With that, I decided to search for a photojournalism internship just anywhere, anywhere abroad. I came across an internship for travel journalists in the heart of Spain, Madrid. I had never been to Spain and I had some of the Spanish language under my belt, so I promptly applied. Over the past ten months, I thought my “travel bug itch” had been somewhat relieved. Yet, as I now sit here in my hostel bedroom that overlooks the multi-cultural city streets of Madrid in Spain, I have well realized that I am not the only one itching with the bug. It is everywhere, especially amongst the young, and especially here in Spain. It is now that I question whether I packed enough with me to be ready, both physically and mentally…

Major cities within Spain this summer have been teeming with tourists so much that Spain has been placed first in the global Travel and Tourism Index for the second time within the last five years (World Economic Forum). According to Juan Molas, the head of the Confederación Española de Hoteles y Alojamientos Turísticos (CEHAT), “…Spain is expected to welcome 56.7 million visitors from abroad between January and August, about 8.8-8.9% higher than in the same period as last year.” Most of these international tourists are filling up hostel bedrooms in different cities each night as the Instituto Nacional de Estadística (INE) proves in its “Youth Hostels: Occupancy Survey (June 2017).” The statistics provided in this survey highlight that overnight stays are as high as 268,589 in June of this year, which is greater than last year’s overnight stay value by 5.66%. Alongside this data value is the average number of days our young generation stays at these hostels, which is 2.39 days. Not very long. Especially, not long enough to get to know the culture, and more importantly, the locals, the ones who have long shaped the environment we have decided to be a part of as foreigners.

Within merely the last three weeks there has been an outpouring of violence and protests against tourism in the well-known coastal cities of Spain. From Barcelona to Mallorca to Palma to San Sebastián to almost anywhere the travel bug epidemic is diagnosed at its highest right now, Spaniards are denouncing tourists around the clock. Of course, as a foreign tourist myself, I wonder why…? I have made several guesses and assumptions, yet the best answer is to always approach the individuals arousing such social outcry themselves—the locals. Not having felt so certain throughout my travels thus far this time around, and once thought I was, I set out more motivated than ever to question random locals and tourists on their perspectives upon the issue.

Interview number one, which really came to me in my hostel, was a group of four, young Australian men (in their early twenties) staying for two days here in Madrid. These men have been bouncing around Europe for the last two months and are gradually approaching their final, restless days of touring and sightseeing. The first question asked, “Why are you here in Madrid?” The first answer replied, “We are here as part of a Europe trip. Spain, as a whole, we are here to experience the food, nightlife, tourist attractions, and women.” There are a lot of explanations in that answer. However, it was even more intriguing to see the reaction upon the middle-aged madrileña’s face when she read these answers at the end of interview number two with her and her local friend. 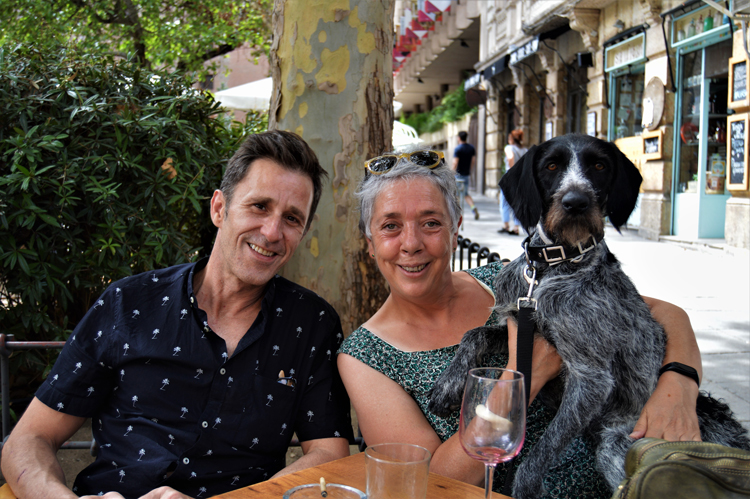 Two middle-aged, madrileño friends come together after sharing tapas, wine, and a long conversation with myself in the neighborhood of Chueca | Rachel Peet

Interview number two, I aimlessly approached the middle-aged pair of friends who appeared to be madrileños sharing tapas and vino in the nearby barrio of Chueca. First and foremost, I inquired upon whether they had noticed a heightened influx of tourists over the past few years and they immediately bolstered back, “Sí, ¡MUCHO!” (“Yes, A LOT!”) Let me accentuate the great emphasis they placed upon the “mucho” in just those two words. In that moment, this contemporary issue of “tourists vs. locals” hit me, and it hit me hard, but in a meaningful way. These two welcoming and enlightening madrileños have been witnessing their own shops, restaurants, neighborhoods, traditions, and culture in general, being consumed at an overwhelming pace lately. In return to my final question of the interview; “What is your perspective on the protests against tourism? Do you think the protests help the problem of tourism or worsen it?” they surprisingly discussed the same nightlife, drinking, travel hostels, etc. that the Australian men had answered with not too much earlier. She specifically wrote down, “Borracheras por la noche, mear en las calles, y basura, ruido… …respecto a la convivencia con los del entorno con los que viven en la ciudad.” (“Drunkenness by night, piss in the streets, and trash, noise… …respect to the coexistence with those of the environment with those who live in the city.”) Conversing for over a half hour with these two, and conversing about much more than this issue, I felt and learned an inexplicable amount. My empathy was growing and I still had many other minds of madrileños to listen to.

The next duo of madrileños was a younger couple (in their early twenties) strolling about Parque del Buen Retiro for their afternoon “camino.” In contrast to their elders that I had just visited with, they appeared much more open-minded. I had been eager to see if their Spanish culture had changed at all with the high-rise in tourism, and with an impartial attitude, the woman said, “Las personas abren su mentalidad y son más sociables.” (“The people open your mind and are very sociable.”) Their minds seem as though they have been opened to these very sociable “people” (notice the woman used “people” rather than “tourists!”) time and time again. She even moved onto providing a valid solution later in the conversation— “Preferiría que se dispersaran, que haya más por los alrededores de Madrid y algo menos por el centro.” (“I would prefer that they disperse, that there would be more on the outskirts of Madrid and less in the center.”) The fact that she had a potential resolution in mind immediately meant that the subject matter had been in mind recently too. I am not sure if it has been in mind as much for the tourists however… 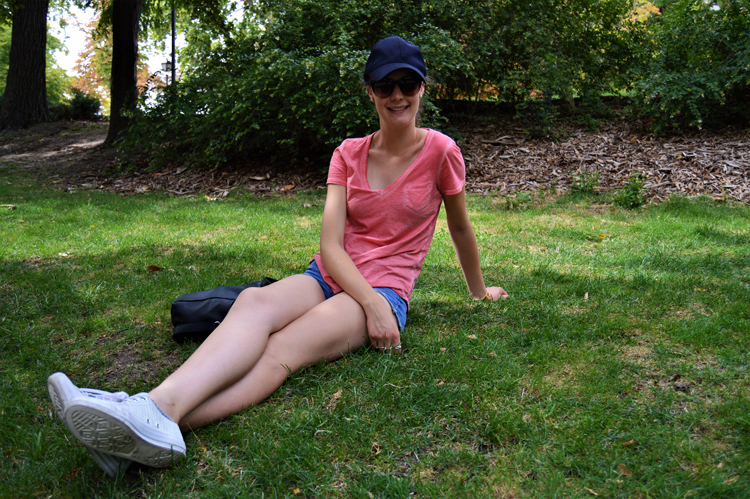 Following this last couple on my quest to better understand my “unpreparedness” for this trip, were two independent travelers— one, a young woman from Australia, the other, a young man from Ireland. Despite the Irish man having been in Madrid for a while and staying for two entire months away from home, both his answers and the Australian’s where brief and hasty-like. Neither one of them mentioned anything relating to Madrid’s people and/or current culture when asking them, “What do you want to learn about Madrid?” The Irish intern tersely wrote down, “How to have a good time here.” As for the Australian roving all about Europe on her lonesome, she stated, “The general history of the city.” Such terse feedback shocked my traveling side as being a lone traveler would urge you to socialize with others about you, right…? 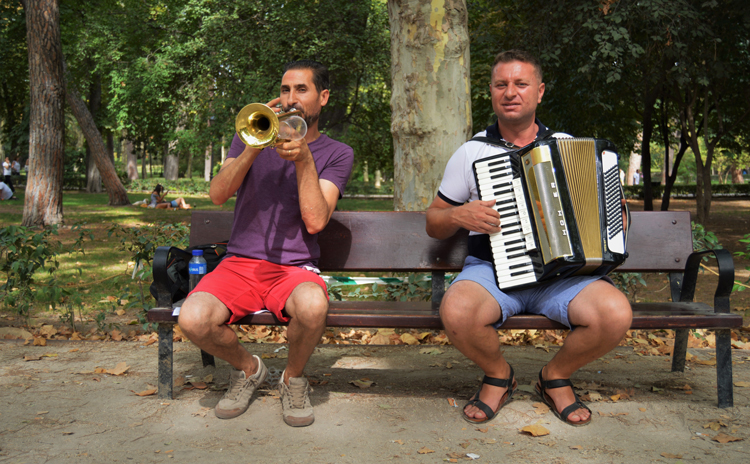 The sudden melodies of two locals playing the accordion and the trumpet near Retiro’s Palacio de Cristal attracted me to their rare madrileño perspective, especially as their jobs and lives depend upon incoming tourists. There were the anti-tourist locals, the open-minded and compromising locals, and now, the tourist-loving locals. Their love for international travelers shined through the most during our interview when we were wrapping it up. In between their upbeat tunes, I questioned, “What is your perspective on the protests against tourism? Do you think the protests help the problem of tourism or worsen it?” One of the two older men answered without any slight hesitations, “Creo que un país funciona con turistas. No hay turistas, no hay negocios y no hay una economía buena.” (“I believe that a country works with tourists. No tourists, no business and no good economy.”) Even as a tourist interrupting their jobs so suddenly for this interview, I felt obligated to pay them some euros. I tossed in my two euros and took my time wandering towards the gates of the park while my thoughts endlessly wandered as well. 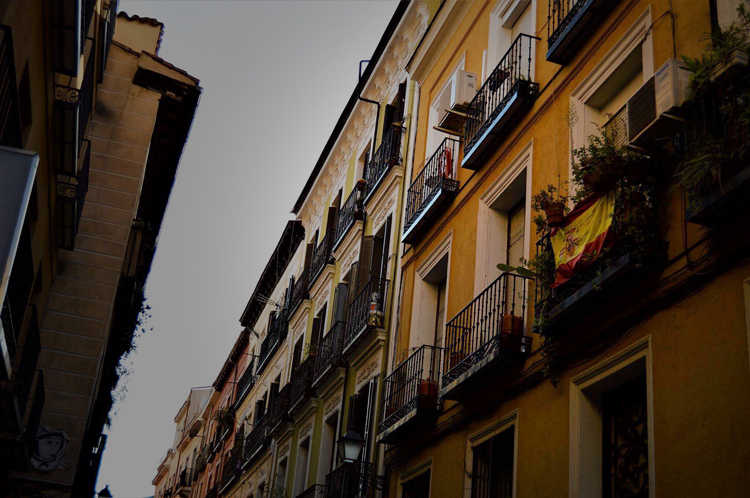 The flag of Spain waves in the multi-cultural atmosphere in the southern barrio of Lavapies, where different ethnicities from all over the globe reside peacefully together | Rachel Peet

Nearly one week after these conversations and at least two hours reflecting upon this “tourists vs. locals” issue each day, I still feel a whirlwind of emotions. Nevertheless, I now know the three necessities, the “three e’s,” that every contemplating tourist should keep on their packing list before traveling outside the borders of their homelands; education, effort, and empathy. Before traveling to Spain, I wish I had educated myself upon Madrid and all the hidden gems and rich history it has to offer. Before traveling to Spain, I wish I had researched more upon the everyday madrileño lifestyle so as to have greater effort to speak in Spanish and make local relationships from the start. Before traveling to Spain, I wish I had informed myself of this contemporary issue so I would have had more empathy from day one as well. It may have been a long, and thought-provoking process, but I am overwhelmingly grateful to have experienced such a process within the diverse, amiable, and peaceful atmosphere of Madrid.