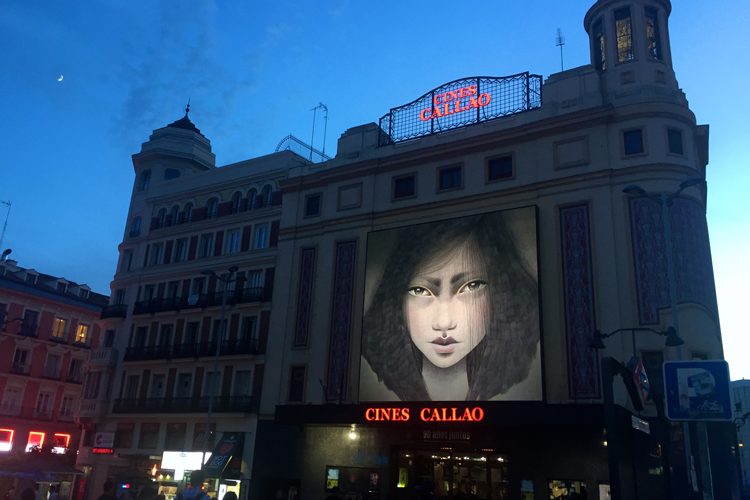 Is Cinema Thriving or Dying in Madrid?

Ryann CastroSeptember 5, 2017
MADbudget: a local's guide to Madrid0 Comments 3
The following article is published in the #RGNNMadrid Magazine: Vol. III, Summer 2017, produced during ROOSTERGNN Academy’s Travel Journalism & Photography Internship Seminar in Madrid, Spain, under the editorial direction of RGNN Expert and Mentor Natalia Martín Cantero. Follow #RGNNMadrid for all of our Madrid coverage.

Despite the box office spike in 2016, Spain has been suffering from a decline in cinema attendance. Many cinemas that were once bustling with moviegoers now struggle to keep business going. Several theaters like Cine Dore, which existed during the era of silent films, have been renovated while others have discounted their tickets in hopes to bring more people in. In parts of Madrid like Plaza De Los Cubos and Community of Madrid near Gran Via, there are multiple locations you can go to watch films within meters of each other. With gentrification on the rise, the question is posed of whether cinematic experiences outside the home will have a chance to make a comeback.

Under the Franco regime, Spanish cinema was heavily censored. This censorship affected many people in the industry and even led to actors to exile due to the development of the National Department of Cinematography set up by Franco supporters. The Spanish cinema of 1930s and throughout Franco’s regime was deeply rooted with propaganda messages. The end of Franco’s dictatorship signaled a great change for directors. Under a democracy, Spanish cinema has been able thrive with filmmakers acquiring the ability to be more creative and address controversial topics during a movement known as La Movida.

Madrid is making an effort to showcase great works of Spanish Cinema with exhibits like “Art and Film. 120 years of exchanges” at the CaixaForum. Demonstrating the impact of visual art and film in society, this exhibit illustrates the artistic connections of big name artists and filmmakers like Luis Buñuel and Salvador Dalí. Made up of about 349 pieces from about one hundred different names, 56 films or fragments of films, 10 different video projections, over 200 paintings, photographs, drawings, engravings and 52 posters, the CaixaForum was able to put together an indescribable experience that presents the creative works of so many artists. Museum worker, Alberto, eager to talk about the exhibit, said that “the subject” of the exhibit is what makes it unique and he has noticed an increase in attendance to the museum.

Another location that stands as both a museum/archive and movie theater is Cine Dore. Built in the 1920s, Cine Dore once was a hub people gathered to watch silent films. Used as a “salon” for various activities before becoming a place for screenings, the Cine Dore was designed to hold a capacity of over 1,200 spectators. This filmoteca suffered through several unsuccessful periods, which eventually led to the closure in 1963. In 1982 a restoration project began marking the beginning of a new Cine Dore, open and successfully running, it contains a Spanish Film Library and shows films in its original language with Spanish subtitles. Until recently, Spanish cinema has not been well preserved, but Cine Dore has made the jump to change that. In an interview done with El País in 2014, the manager, Antonio Santamarina owed the success of the theater to “its audience, who have ensured the Doré as the permanent screening room of the Filmoteca Española, not a cold museum of cinema, but a cinema that preserves its soul and is more alive than ever”. Although the theater continues to endure obstacles such as a bedbug infestation in 2016 – causing a five-month closure, a lack of staff and funding cuts, it is responsible for the safekeeping of a large archive of Spanish cinema. Cine Dore is well worth a visit and is open today in thanks to those who continue to attend screenings.

With the restoration of Spanish Filmoteca Cine Dore, the topic of gentrification arises and whether it has had a positive influence on the cinematic experience in Madrid. The city is filled with movie theaters, making it easy to see any recently released film and even critically acclaimed films that are not new to theaters. I attended a film myself to get a better idea of the Spanish film screening experience and felt that the experience was similar to that in the United States. Finding a theater that showed films in English was very easy, and overall the price of the experience (ticket and food/beverage) was slightly cheaper. Something that was positively unique to my experience was that the theater, Princesa, offered printouts that included any important information about the films playing. Though in Spanish, this was a small detail that someone who is fascinated by media really appreciated. The viewing experience of the film was slightly cramped due to the small, narrow theater space but this did not have a lasting affect while I watched the film. The entire area surrounding Plaza De Los Cubos and Gran Via – two locations I visited to get a better understanding of the cinema environment – were bustling with plenty of people lined up to purchase movie tickets. Seeing a movie with friends, family or a significant other seemed to be a popular activity for both locals and tourists to do on a Saturday evening in Madrid. After speaking with Roberto, the event manager at La Asociación de la Prensa, movie theater visits have fluctuated depending on the seasons and what films were showing. “During August, a theater the seats four or five hundred may only be filled with about 80 people, but other times of the year the theater will be filled”.

Based on the research I conducted, sites I visited and first-hand knowledge, the cinematic experiences in Madrid seem to be thriving due to a more recent success in the film industry. With a steady growth in cinema attendance, Spain can combat the economic obstacles such as the recession, piracy, and increased ticket prices that took a toll on cinema attendance. In 2016, the rate of attendance increased 7.5 percent, which proves that there is hope for Spanish cinema. Madrid offers a plethora of experiences, from movie theaters to art exhibits and Spanish Film Archives, providing an enticing sensory overload of cinematic art.