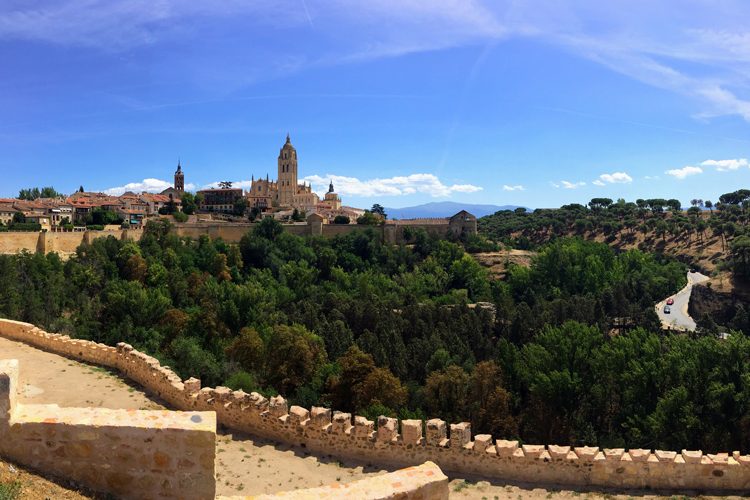 A Guide to Segovia, the Spanish City of Walt Disney’s Dreams

Rachel PeetSeptember 8, 2017
MADbudget: a local's guide to Madrid0 Comments 0
The following article is published in the #RGNNMadrid Magazine: Vol. III, Summer 2017, produced during ROOSTERGNN Academy’s Travel Journalism & Photography Internship Seminar in Madrid, Spain, under the editorial direction of RGNN Expert and Mentor Natalia Martín Cantero. Follow #RGNNMadrid for all of our Madrid coverage.

Yeah, I thought Walt Disney’s original castle was in the Disney World of Orlando, Florida too. I thought wrong though… When venturing off for a much-needed day of fresh air away from Madrid’s constant hustle and bustle, I discovered that Walt Disney was inspired by the long-established fortress built in Segovia, Madrid. After my day-long visit to this World Heritage City only an hour outside of the capital, I was inspired too.

Segovia lies within the historically rich and autonomous Castile-León region in Spain and has been lying there for well over 2,000 years. Over these years it has been reigned by a variety of populations— from the Celtics to the Romans to the Jewish to the Christians, and now the Spaniards. Between such a profound history and its detailed architecture maintaining its infrastructure today, the city itself is a must to explore while staying in Spain. Before visiting the city for the day however, here is a guide of five “musts” that may leave you just as inspired as Walt Disney, and perhaps make you the next innovating “Disney.” 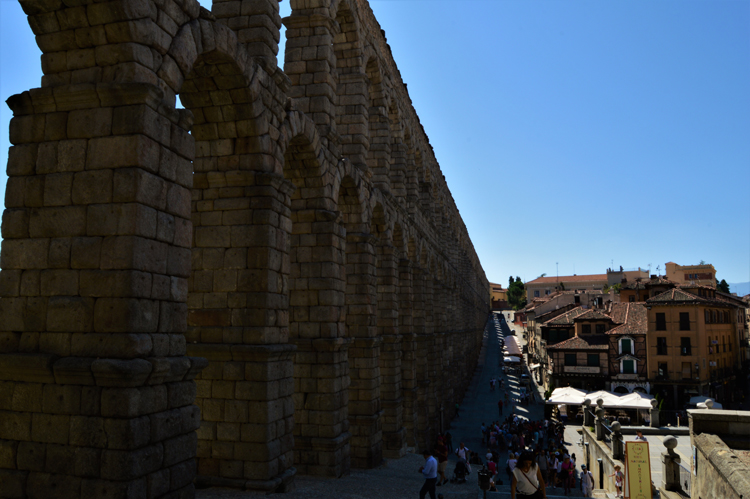 The first structure to catch your eyes when strolling up the main Avenida de Fernández Ladreda towards the Plaza del Azoguejo. According to UNESCO’s World Heritage Convention site, the ancient Roman Aqueduct was most likely built in 50 B.C and has been impressively conserved since. The aqueduct stretches from one end of the city to the other with a length of 813m, 128 pillars, and standing tall at a height of 28.5 m at the lowest point of Segovia’s valley-like shape. Either while standing in the center of the Plaza or after climbing the staircase to your left are the best moments to pick up your camera lens and capture the unbelievable views of the monument. 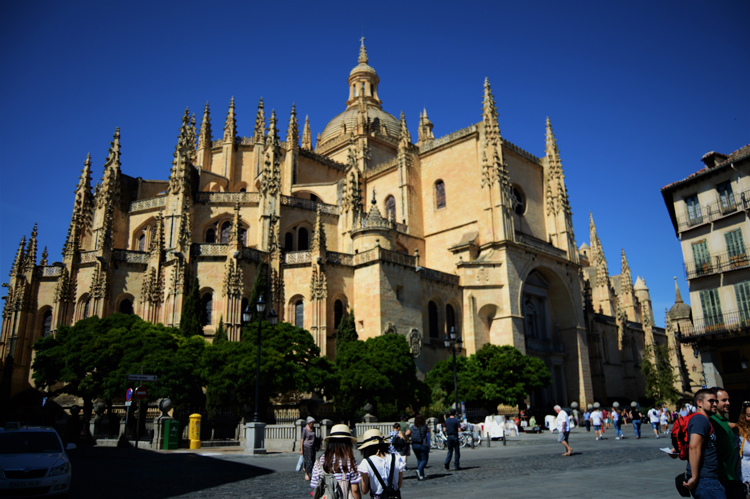 The Nuestra Señora de la Asunción y San Frutos Cathedral, or better known as the Cathedral of Segovia for short by locals of the city | Rachel Peet

After your photo shoot at the top of the staircase next to Segovia’s main attraction, make sure to take Calle Juan Bravo to the Plaza Mayor and the Cathedral. Segovia’s cobble-stoned and narrow streets are lined with dozens of tiny iglesias and cathedrals, but just as the Roman Aqueduct does, this more than 500-year-old cathedral takes a while to take in. The construction of Segovia’s largest and main cathedral began in 1525 and took nearly 200 years to finally accomplish. As they say though, slow and steady wins the race and the Cathedral wins in both immense design and unique culture. The structure is so vast that one can purchase tickets between 2-5€ for a tour that includes 20 different chapels and leads to the tallest tower which overlooks Segovia’s wondrous panoramas. (Insure that you take your time both making your way towards the Cathedral and along Calle Marqués del Arco after as street vendors with handmade goods so humbly grab your attention. Even a local, handmade jewelry designer who sold a pair of turquoise filled earrings and travels to Segovia from Madrid every weekend enthused over Segovia— “It is one of the most beautiful cities in all of Spain with its sights, tranquility, and various cultures arriving from all sorts of directions.”)

The magic that started it all for Walt Disney, aka the Castle of Alcázar in the Plaza de la Reina Victoria Eugenia | Rachel Peet

From one historical sight to the next, Segovia is the land of views, especially when you reach the far corner of Disney’s dreams at the Castle of Alcázar. Just upon reaching the Plaza de la Reina Victoria Eugenia in front of the castle, you can sense a kind of magical pixie dust luring your curiosity in. According to tourist guides of Alcázar, the earliest record of the fortress date back to the 12th century. All throughout the Middle Ages, royalty reigning over the Castile region were known for residing there, such as the renowned Princess Isabella who was even enthroned there as Queen Isabella I of Castile and León in 1474. After partaking in a breathtaking tour of Gothic art style, take a break at the nearby café and take in the panoramic landscape of both the Cathedral afar and the rolling hills nearby. (Photographs of the Castle of Alcázar and Panoramic Views of the City here.) 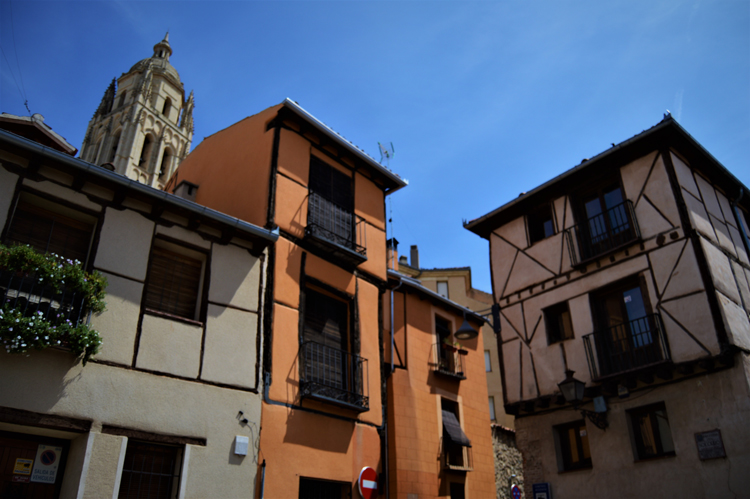 Empty, yet serene streets of the historical Jewish Quarter in Segovia | Rachel Peet 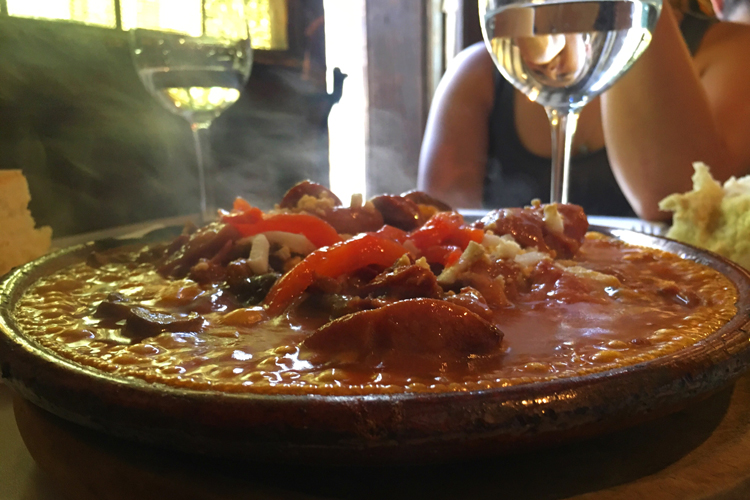 Your last “must-stop” before heading back to the never-ending nightlife of Madrid is the restaurant at the world-famous inn of Mesón de Cándido. The Cándido family has certainly marked their legacy in the Plaza de Azoguejo in Segovia, and has been catering to travelers across the globe with awe since 1905. Their Segovian style menu consists of a wide-range of differing meat entrées (i.e. lamb, veal, chicken, steak, partridge, duck, etc.), a long list of fine wines, and their traditional, suckling pig. Along with the flavorful taste that has spread to amazed “foodies” near and far, the Cándido family owner continues to preserve their classic ritual of carving their cooked piglets with the edge of a plate to serve with great hospitality. A lengthy speech begins the long-lived ritual, and ritual or not, nearly all tourists are warmly greeted by Alberto Cándido, even myself who ordered their pig snout. Not only are unforgettable tastes left from the Cándido restaurant experience, but so is the welcoming and historic ambience of the inn that will sum up your day to Segovia.