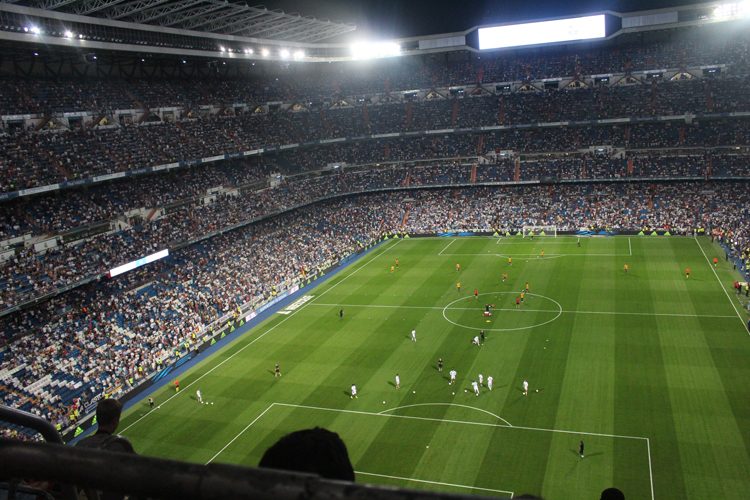 A Beginners Guide to El Clásico

Scott DePuySeptember 10, 2017
MADbudget: a local's guide to Madrid0 Comments 1
The following article is published in the #RGNNMadrid Magazine: Vol. III, Summer 2017, produced during ROOSTERGNN Academy’s Travel Journalism & Photography Internship Seminar in Madrid, Spain, under the editorial direction of RGNN Expert and Mentor Natalia Martín Cantero. Follow #RGNNMadrid for all of our Madrid coverage.

MADRID— El Clásico, the beautiful game, Barcelona vs. Real Madrid, no matter what you call it Spain’s biggest soccer game of the year is the most perfect, thrilling and powerful sporting event in the world.

When you exit the Metro and walk up the stairs into the Santiago Bernabeu grounds, you enter a new world, one that is brimming with pride and passion. Walk into any bar and you will see an array of FC Barcelona and Real Madrid fans chatting away about their team’s chances for this year’s game.

“Anywhere that serves alcohol is the place to be before the game,” said Gonzalo Gazia, a local fan.

For decades the pub has been a staple in soccer. Even if you don’t have tickets fans gather around the stadium to watch the game in bars like the Restaurante Brios, a small pub that is right across from the stadium.

Do not worry about having a hard time getting a beer, the staff of the bars are well oiled machines much like their team they know when game day arrives they must be prepared.

Compared to most sporting events around the world, games in Spain start very late. The game started at 11pm but fans are at the bars and in the area many hours before kick off.

Once you finally make your way up to the stadium steps a frantic crowd piles in with you waiting for the gates to open, this is not a place for the claustrophobic. The gates are packed with people like sardines who want to be the first ones in.

When the gates open a mad dash occurs up the ramps, past security and into the stands.

Ones we finally made it all the way up steps and set foot out into the viewing area the stadium takes your breath away, it is a monument to the beautiful game.

Santiago Bernabeu opened in 1947 according to the clubs official website and can hold over 81,000 people its a simple stadium that isn’t flashy but does the job better than most.

Seeing the game is the most important thing to fans and the Bernabeu does not have a bad seat in the house. Our seats were in the nosebleeds but not a moment of action was gone unseen.

As fans pile in and starting lineups are introduced chants engulf the stadium.

Fans scream Ala Madrid!”. it was deafening sound of unity and pride it sent sent chills down my spine. The floor below us began to shake as kickoff arrived; it is unlike any sporting event I have ever experienced.

Only four minutes into the game Marco Asencio sent a beautiful shot into the back of the net and the stadium erupted as Real Madrid fans once again sang “ala Madrid!” and chanted “Asencio!”

I found myself joining the chants even though I am a staunch hater of Real Madrid. It was overwhelming, the happiness and pride felt by the entire stadium was overwhelming.

The chanting never stops; the fans never lose attention from before kickoff to well after the game the energy is constant.

When the final whistle blew Real Madrid was up 2-0 and the fans in Bernabeu let out a massive cheer that shook me to my core. I couldn’t help but smile as I saw people of all ages celebrating a win over Madrid’s most hated rival.

When the game is over the celebration doesn’t stop in fact it intensifies as we took to the streets fans chanted and celebrated. 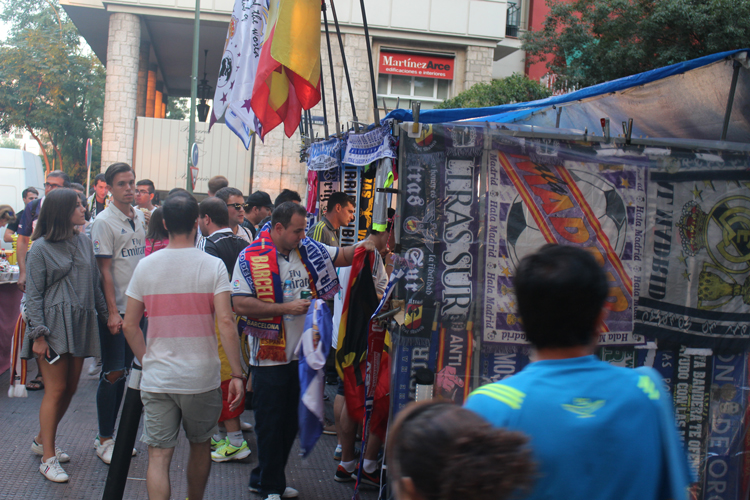 It was nearly 1:30am but many fans went back into the bar to toast to their pride and joy, Real Madrid.

“It should the greatest game in the world,” said Nyco Scheers a visiting fan from Belgium.

Weather you get tickets to be in the stadium or not you can certainly find a place to feel included in the action.

El Clásico is more than a game to the people of Spain it is an experience that pits the two largest cities in Spain against each other. The game engulfs fans emotions, hearts and well being it is astonishing.

When I decided to go to El Clásico I did my research, I thought I was prepared. I was wrong. There is no way to prepare for this spectacle. Words barely do it justice, pictures and video only tell half of the story.